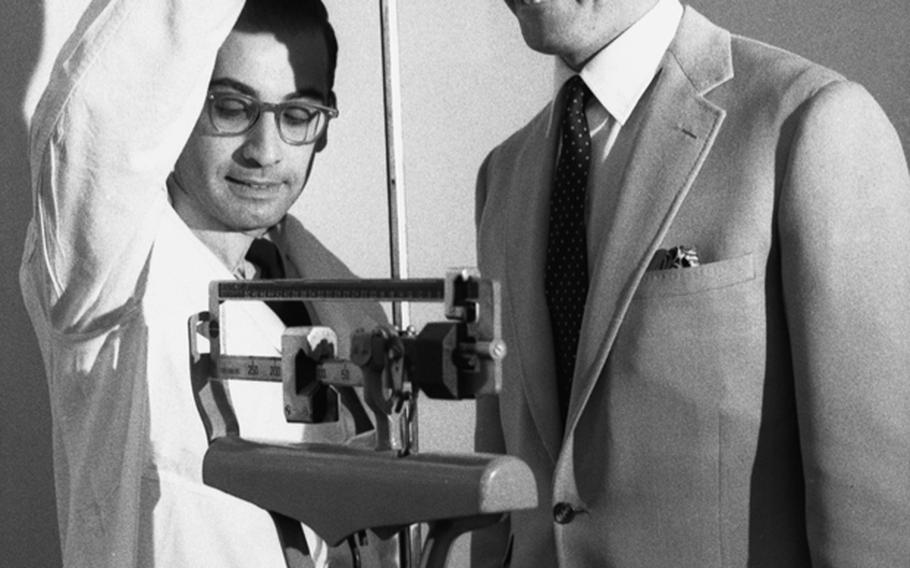 Hamilton, 27, who makes his home in Beverly Hills, Calif., is registered with the New York City draft board and received special permission to take repeat written and medical exams in Germany because of his film obligations. He worked on the set until 4:30 a.m. and then after an hour's sleep appeared at the U.S. Army Area Comd recruiting office for his written test.

Natty In a sand-colored suit, the actor was greeted by a guard of MPs and waiting newsmen, including a U.S. television crew. Hamilton, who has been deferred In the past because he is the sole support of his mother, took the tests under the direction of M. Sgt. Melvin N. Bruington of Florence, Kan., recruiting NCOIC.

Just before he was closeted with Bruington, Hamilton turned to onlookers and said, "Gentlemen, wish me luck."

He didn't specify how the wishes were to be phrased.

From Area Comd Hq In McGraw Casern, Hamilton drove to the Munich U. S. Army Hospital where he was greeted by Dr. (Lt. Col.) Gabriel Gregoratos, chief of the Department of Medicine who gave the physical.

After a three-hour exam, Hamilton met with the press. Asked how he felt about the possibility of being called to service, Hamilton said, "I think It's my duty to take the obligation and shoulder it.

On the question of his deferment, Hamilton said that was a matter "between myself and my draft board."

He answered "no comment" to all questions about his relationship with Lynda Bird Johnson, with whom he has been frequently linked.

Hamilton, who has two older brothers who live with him and his mother in a 39-room mansion to Beverly Hills, said that if called he wouldn't want to work on the USO or soldiers entertainment circuit.

"If called in, I don't think It should be as an actor," he said. He expressed a preference for the infantry &mdash; "I don't mind walking."

How did he do on the mental exam?

"I guess l passed it &mdash; at least the sergeant didn't look at me strangely afterward. And even with only one hour's sleep, I feel fine."

Hamilton was casual and relaxed and joked freely. He slipped in several plugs for his new film, "Jack of Diamonds," and got a big laugh by pointing out that his last film, in which he co-stars with Sandra Dee, is called, "Doctor, You Must Be Kidding."