Geography whiz from Schweinfurt is D.C.-bound 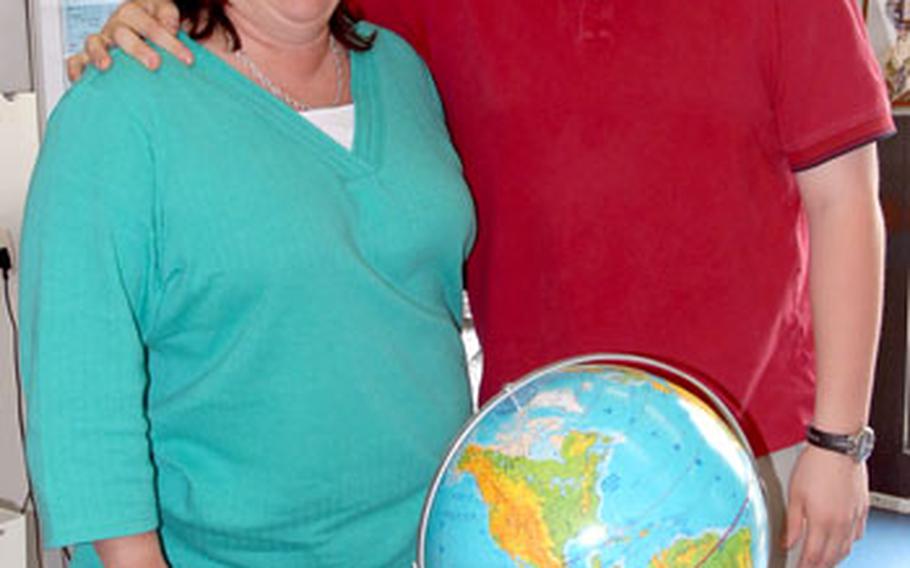 Miguel Guevara, 14, a student at Schweinfurt Middle School, poses with sponsor and World Geography teacher Nancy Dauber. Guevara will be representing the Department of Defense Education Activity on May 20-21 in Washington D.C. at the National Geographic Bee. (Dan Blottenberg / S&S)

SCHWEINFURT, Germany &#8212; Miguel Guevara, 14, awoke April 6 to the sound of his mother and sister humming the tune of "Hail to the Chief." With a smile, his mom, Heide Guevara, informed her son that she had received the call they had been hoping for.

The Schweinfurt Middle School student is this year&#8217;s Department of Defense Education Activity representative in the National Geographic Bee to be held in Washington on May 20-21.

Each year between January and April, the National Geographic Society prepares geography tests for thousands of students in grades four through eight. Then each U.S. state and territory announces a winner in early April to take part in the nationwide competition.

The top 10 competitors compete on television in the finale, which is hosted by "Jeopardy" game show host Alex Trebek.

Miguel admits being a little intimidated.

"There is always someone out there who is better," he said.

Miguel&#8217;s teachers have the utmost faith in their prized student.

"He has a good eye and thinks deep about things," said Nancy Dauber, who will be Miguel&#8217;s sponsor at the competition and is the world geography teacher at the school. "He has a photographic memory, which really helps because he is always reading and watching things like The History Channel and BBC."

Miguel attributes his success to the fact that he loves the subject. He has been watching educational shows like those on The History Channel since he was 8, he said.

"If you are interested in it, you will be successful in it," Miguel said of his interests, which include geography, history and, most of all, politics.

Miguel remembers the first time he turned on The History Channel and there was a documentary on World War II. Since then he has been hooked.

He has been preparing for the competition by taking online tests on the National Geographic Bee Web site, reading books on the subject and studying with his teachers.

"He comes up to his teachers and asks them to ask him questions," Dauber said.

His teachers have taken it upon themselves to prepare him for the competition.

"I told the teachers here to come up with about 10 hard questions a day for him," Dauber said.

Though Miguel has geography on his mind now, he is interested in a career in politics, where he can make money and travel outside the U.S. at the same time, he said.

"Something like an ambassador to the United Nations sounds about right," Miguel said. "I think the president has a little too much responsibility."

Miguel is a seasoned traveler who has spent much of his childhood in Europe, Japan and parts of North America because his parents work as Department of Defense civilians.

Traveling so much in his youth could explain his lack of interest in the U.S., which he says is his weak point when it comes to his geographic knowledge.