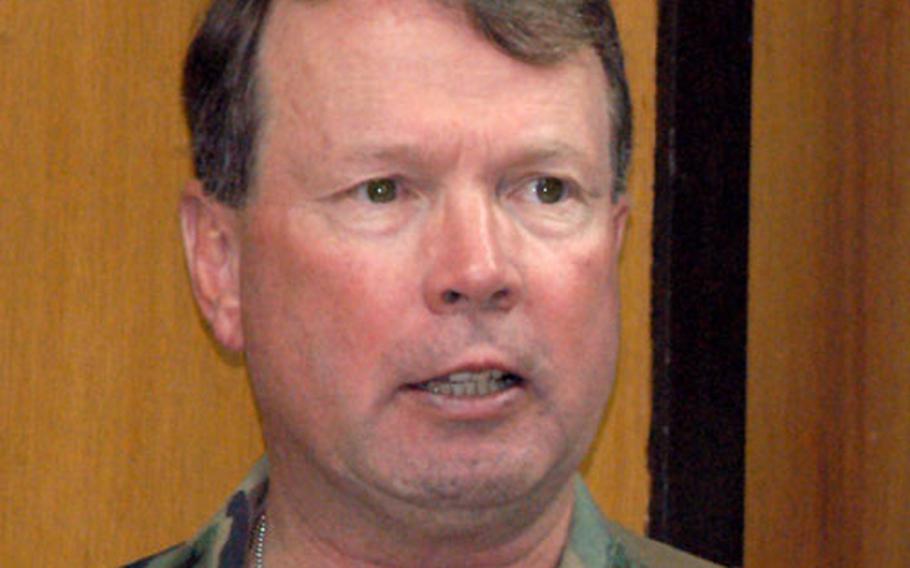 Lt. Gen. Charles C. Campbell, 8th Army commander and chief of staff for U.S. Forces Korea, announced Friday that a lack of money from the South Korean government may cause USFK to cut jobs, contracts and even military equipment for U.S. forces in the coming years. (Teri Weaver / S&S)

The reason, according to Lt. Gen. Charles C. Campbell, the chief of staff for USFK, is South Korea&#8217;s failure to provide enough money to pay for American troop strength throughout the peninsula.

Campbell, who also commands the 8th Army here, held a quickly scheduled news conference Friday to say the South Korean government is not giving the United States enough money this year to maintain the current level of services provided by U.S. military forces.

The &#8220;shortfall&#8221; could force USFK to &#8220;alter the amount and composition of combat equipment currently planned,&#8221; Campbell told reporters at USFK headquarters on Yongsan Garrison. &#8220;We are analyzing additional measures we may be forced to take to meet our operations and readiness requirements.&#8221;

&#8220;We will focus our efforts on attempting to minimize the potential impact on readiness created by a funding shortfall,&#8221; he said.

USFK officials on Friday would not say how much the Koreans had offered to cover of this year&#8217;s total cost. USFK also did not give specific examples of what military equipment or missions might be affected by the possible cuts.

U.S. and South Korean officials have been meeting for months to determine how much the Koreans should pay in return for the United States stationing 32,000 troops on the peninsula.

The United States has wanted South Korea to increase its contribution to bring it more in line with what other countries pay for U.S. troop support. In Japan, for example, that country pays about 75 percent of the of the U.S. military costs there.

South Korean government officials, however, have said it wanted the costs frozen or reduced this year. They point to U.S. plans to downsize its force here by a third. South Korea also says that other contributions, such as its deployment of 3,600 Korean soldiers to Iraq, should lessen the price.

A fifth round of talks was held last month, and a Korean official left the table saying that both sides were close to an agreement.

Campbell said U.S. officials had contacted the Korean employees union about the possibility of layoffs. USFK employs about 10,000 workers who fall under the cost-sharing arrangements, according to a statement from USFK&#8217;s public affairs office.