General: US missions in South China Sea will continue, despite China buildup 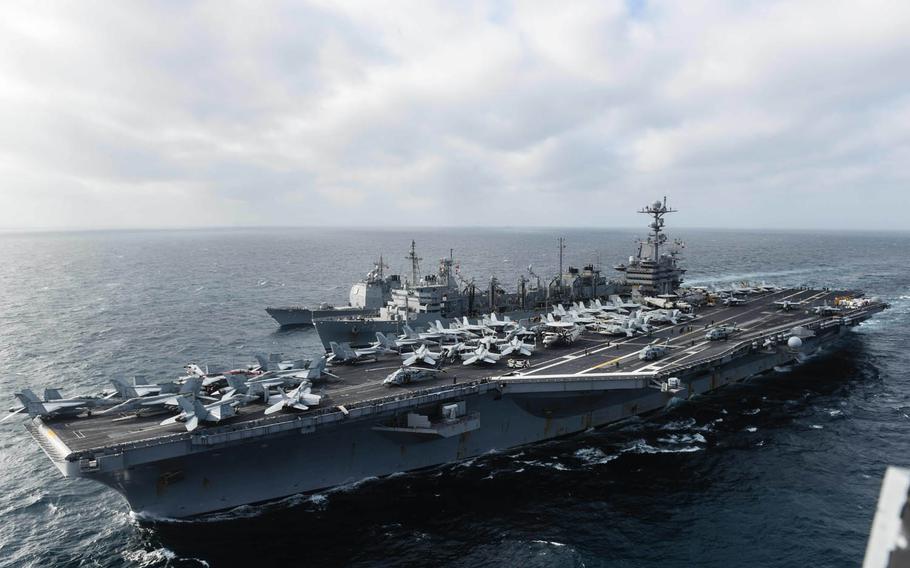 The U.S. Air Force will continue to conduct missions in and over the South China Sea, the top Air Force officer in the Pacific said Tuesday — despite China’s military buildup and its foreign minister’s recent insistence that freedom of navigation in the region has its limits.

“We’ve watched the increased military capability on those islands, whether it’s the fighters, whether it’s the missiles or the 10,000-foot runways. We will continue to do as we’ve always done, and that is fly and sail in international airspace in accordance to international rules and norms,” Gen. Lori Robinson said Tuesday in Canberra, Australia, according to The Associated Press.

China maintains an ambiguous claim to about 90 percent of the South China Sea, a position that puts it at odds with several of its neighbors over rights to the small islands there, and with the United States over transit through international waters. Over the past two years, China has added to the sea about 3,000 acres of landfill to reefs and rocks, some of which now host self-propelled artillery and airfields capable of supporting a variety of military aircraft.

Despite China’s objections, the U.S. has continued flying its planes over the region and sailing its military ships through the international waters. Earlier this week, the USS John C. Stennis carrier strike group left the South China Sea, where it conducted what the Navy deemed as routine operations.

The moves have not gone unnoticed by Beijing.

“I want to remind some people that the freedom of navigation doesn’t give them a license to do whatever they want,” China Foreign Minister Wang Yi said, according to video posted online by China’s Xinhua news agency. “If someone wants to muddy the waters in the South China Sea and to destabilize Asia, China would not agree to it, and I think the overwhelming majority of countries in the region would not allow that to happen.”

But Robinson said the United States and China had signed an agreement on air-to-air rules of behavior in international airspace in September and would continue discussions on the subject this year, according to the AP report.

“That has allowed us to have continuous dialogue with the Chinese about how to conduct safe intercepts and intercepts in accordance with international rules and norms,” Robinson said.

It’s important to avoid any “miscalculation,” she said.

According to the AP, Robinson said Russian long-range aircraft were also increasingly active in the Pacific, flying around Japan and Guam.

As part of U.S. plans to increase its military presence in the Pacific, Robinson said discussions were underway with the Australian military to rotate U.S. bombers through the northern Australian air force bases at Darwin and Tindal. U.S. Marines already rotate through Darwin in a sign of an increasingly close military bilateral alliance that riles China, Australia’s most important trade partner.

“It gives us the opportunity to train our pilots to understand the theater and to strengthen our ties with our great allies, the Royal Australian Air Force,” Robinson said, according to the AP.

U.S. officials contend that freedom of navigation through South China Sea waters and airspace fully complies with international law and guarantees security in an area where $5 trillion in shipborne trade transits annually.

Beginning March 1, the Stennis carrier strike group conducted at least 266 air sorties in the eastern half of the sea, a Navy statement said.

The Stennis, along with destroyers USS Chung-Hoon and USS Stockdale, and the cruiser USS Mobile Bay all took on fuel and supplies from the USNS Rainier.

“We have Chinese ships around us that we normally didn’t see in my past experience,” said Capt. Greg Huffman, Stennis’ commander.

Huffman previously deployed to the South China Sea in 2007, the statement said. Two years later, Chinese ships surrounded and harassed the USNS Impeccable, the first of several encounters that raised tensions between China and the Navy.

In 2014, the nations’ navies agreed on the Code for Unplanned Encounters at Sea, or CUES. Navy officials have since described encounters with China’s navy as generally professional, despite their disagreements on where U.S. ships are entitled to transit.

However, Vietnam and the Philippines have each accused Chinese ships of ramming and firing water cannons at their smaller non-navy vessels. China has in turn accused Vietnam of ramming their ships and blamed the Philippines for provoking them by entering “indisputable” Chinese territory.

Wang denied Tuesday that China had militarized the South China Sea, saying other countries had done so first.

None of the other island claimants are known to have deployed anywhere near the armament that China has within the Paracel and Spratly island chains, according to satellite imagery. Wang might have been referring to Navy and Air Force assets, which have transited the global commons in Southeast Asia regularly since the end of World War II.

Stars and Stripes reporter Erik Slavin contributed to this article.