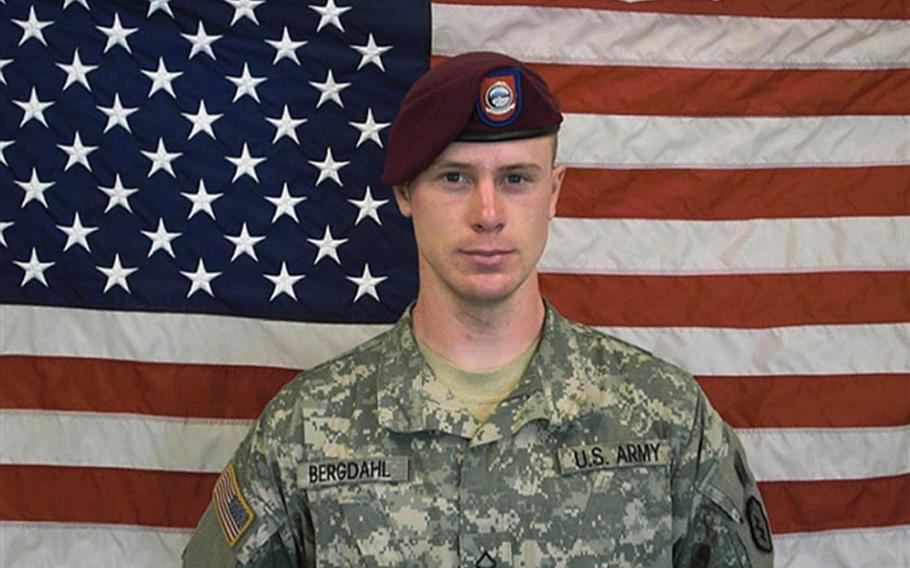 Private First Class Bowe Bergdahl, in a U.S. Army photo taken before his capture. Bergdahl's sentence to forfeit $10,000 in pay, drop in rank from sergeant to E-1 private and dishonorable discharge was upheld on Monday, June 4, 2018. He was convicted of misbehavior before the enemy and desertion after walking off his base in Afghanistan in 2009. (U.S. Army)

WASHINGTON — A top Army general on Monday approved the sentence handed down to Pvt. Bowe Bergdahl, the former Taliban captive who was spared prison time after pleading guilty to desertion and misbehavior charges last year.

Gen. Robert Abrams, the chief of U.S. Army Forces Command, upheld the sentence handed down by the judge, Army Col. Jeffery R. Nance, in November at that conclusion of a weeklong sentencing hearing in Bergdahl’s court-martial, FORSCOM spokesman John Boyce said Tuesday in a statement. Abrams was the convening authority in the court-martial, the senior official who oversees the case and must review and approve the judge’s findings.

Nance sentenced Bergdahl to forfeit $10,000 in pay, a drop in rank from sergeant to E-1 private and a dishonorable discharge, which stops him from receiving any medical or other benefits offered to most veterans. The judge could have sentenced him to as much as life in prison. Prosecutors had requested Bergdahl serve 14 years confinement.

Nance has never publicly acknowledged his reasons for the sentence.

His decision to spare the soldier prison-time sparked outrage among some people in the military community and drew the ire of President Donald Trump within hours of his ruling. Trump tweeted the sentence was “a complete and total disgrace to our country and to our military.”

Before Bergdahl pleaded guilty, defense attorneys had attempted to have the case thrown out over repeated disparaging remarks that Trump made as a presidential candidate. Legal scholars concluded Nance likely handed down a lenient sentence, at least in part, because of Trump’s campaign trail rhetoric.

Because Nance handed down a punitive discharge in his sentence, the case automatically goes to the Army Court of Criminal Appeals at Fort Belvoir, Va., for review.

Bergdahl, 32, walked off his post in eastern Afghanistan’s Paktika province on June 30, 2009 and was captured and held for about five years by Taliban-linked militants in Pakistan before he was released to the United States in a controversial prisoner exchange for five Taliban commanders who had been held in the detention facility at Guantanamo Bay in Cuba.

The Army charged him with “misbehavior before the enemy by endangering the safety of a command, unit or place” and “desertion with intent to shirk important or hazardous duty” in March 2015.

During his sentencing trial, which was completed Nov. 3 at Fort Bragg in North Carolina, Bergdahl said he left his post in an attempt to walk to a forward operating base some 20 miles away to alert military brass of problems that he perceived within his unit.

Bergdahl apologized for his actions, calling them a “horrible mistake,” in a tearful apology to his platoon-mates and other servicemembers who were sent searching for him, including three who prosecutors said were severely wounded on operations focused solely on rescuing him.