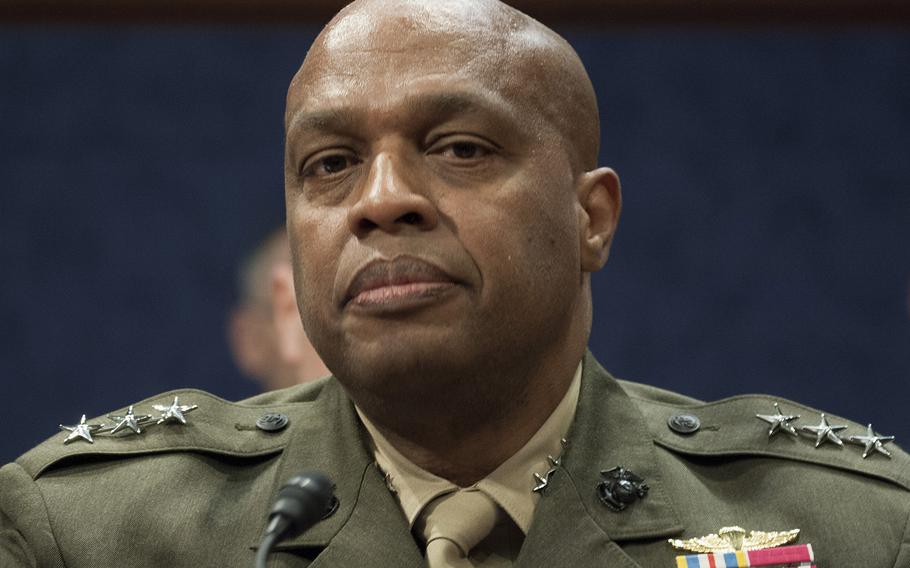 Lt. Gen. Vincent Stewart, director of the Defense Intelligence Agency, at a House hearing in February, 2016. (Joe Gromelski/Stars and Stripes)

WASHINGTON – Reports of Central Command manipulating Iraq and Syria war intelligence have been grossly distorted and are damaging to the Pentagon’s analysis efforts, a Marine general in charge of a key Defense Department intelligence-gathering operation told House lawmakers on Wednesday.

Lt. Gen. Vincent Stewart, director of the Defense Intelligence Agency, said the allegations have been overblown in a way that “disturbs me more than I can state” and said he was thankful for an opportunity to vent during testimony before the House Armed Services Committee.

Central Command, which is in charge of the Middle East and the war against the Islamic State, is under investigation by the DOD inspector general as well as the Armed Services Committee and two other House committees for widespread claims among its analysts that the war intelligence has been manipulated. A survey, which was disclosed by lawmakers last week, found 40 percent of analysts felt some manipulation of information was occurring.

“The 40 percent -- and I saw this number distorted to 400 [people] -- is absolutely gross distorting of the challenges that they face down at CENTCOM,” Stewart said. “It undermines the great workforce that we have down there at CENTCOM, who every single day are giving their best judgment to that commander about how activities and actions are going on in the CENTCOM [area of responsibility].”

He said the DOD has a “robust” process of analyzing data that includes citing, validating and vetting sources and that opinion, even of a three-star general, accounts only slightly for the conclusions.

“My staff has been trying to keep me from … commenting on this and I desperately want to comment on it because I think the assertion that somehow 40 percent of that workforce either represents the totality of our analytic enterprise or truly represents that their judgments are not being accounted for disturbs me more than I can state,” Stewart said.

He also criticized what he said was the release of CENTCOM personnel names who were associated with the alleged manipulation of intelligence amid the ongoing IG probe.

“It is remarkable that folks have named names in an investigation prior to that investigation being completed, and if these individuals are exonerated no one will retract the really distorted reporting that they’ve had in this situation,” Stewart said.

But the general got some pushback during his testimony Wednesday from Rep. Mac Thornberry, R-Texas, the chairman of the Armed Services Committee who is directing one prong of the House investigation of CENTCOM.

“General, it is true however, and I’ve read that [analyst survey] report myself cover to cover, that reflecting in the survey data there is more question at CENTCOM than the other combatant commands about whether the analysts believe that the work they do is altered in some way,” Thornberry said.

The House committees on intelligence and appropriations are also looking into the matter, which first surfaced last fall with allegations from an analyst. In December, the survey found 40 percent of the 120 CENTCOM personnel who responded said somebody had attempted to distort or suppress their analysis within the past year despite persuasive evidence.

“There is a reason to have an investigation … it is a matter of interest for this committee if, in fact, intelligence is being shaped in some way to please superiors whether they be military or political superiors,” Thornberry said.