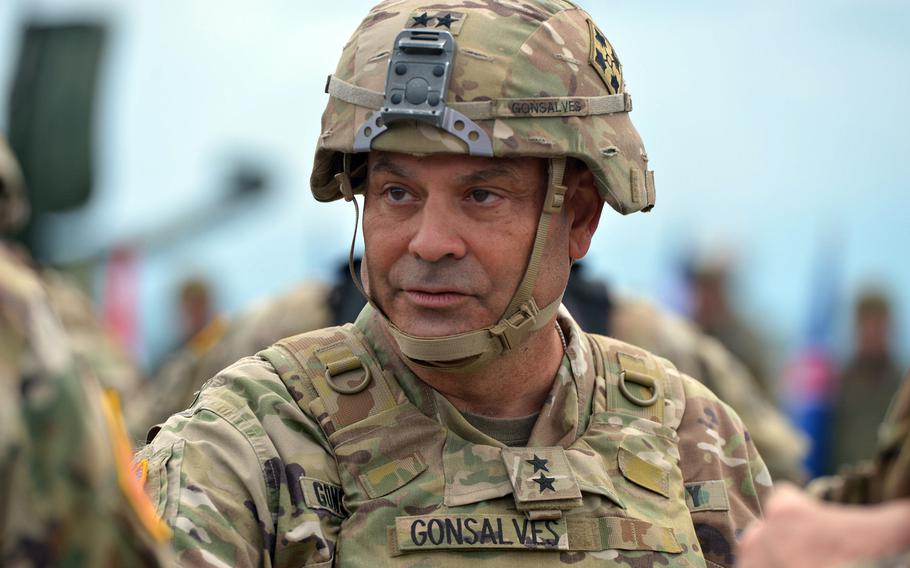 Gonsalves, who was considered to be in contention to serve as the next head of U.S. Army Europe, is now serving as a “special assistant to the commanding general, III Corps.”

“General Gonsalves was substantiated for a failure to treat a Congressional staffer with dignity and respect,” the Army said in a statement. “That finding is currently under review to determine what, if any, further action will be taken.”

The Army did not provide additional details about the nature of the incident or the congressional staff member who was involved. Gonsalves could not be reached for immediate comment.

In July, Gonsalves was nominated for a third star by the Army but that nomination has stalled as the investigation plays out.

Allegations of misconduct by general officers have become an embarrassing scourge for the military, with several missteps garnering headlines.

Recent cases include that of Maj. Gen. Wayne Grigsby, who was fired as commander of the 1st Infantry Division and forced to retire this summer due to an inappropriate relationship with a junior officer on his staff.

In Europe, Maj. Gen. Joseph Harrington was removed as head of U.S. Army Africa when texts surfaced of a flirtatious relationship with the wife of an enlisted soldier. And the U.S. Navy is now investigating more than 60 admirals in the so-called “Fat Leonard” scandal, according to the Washington Post, in a case that is now one of the largest corruption probes in military history.

Gonsalves relinquished command of 4th ID in late August after leading the division for two years. During that time, 4th ID played a key role in Army efforts in Europe, where a brigade of Fort Carson soldiers recently completed a 9-month tour and stood up a new mission command element in Poland, in a push to fortify NATO’s eastern flank.

Meanwhile, the Army said it will name a head for U.S. Army Europe in the coming weeks. The current commander, Lt. Gen. Ben Hodges, was slated to retire by September, but his tenure has been extended while a replacement is found. He is expected to relinquish command on Dec. 15, the Army said.

“Many factors come into play in filling vacancies of this type. These factors include a thorough Army and DoD vetting and recommendation process,” the Army said in a statement.

The USAREUR post requires formal appointment by the president and confirmation by the Senate.