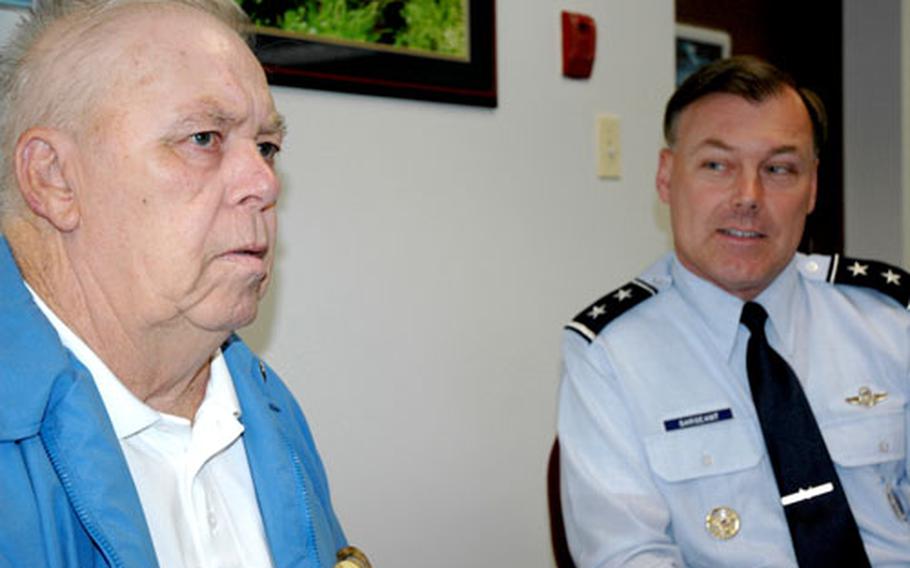 Robert Patrick &#8220;Pat&#8221; Sargeant learned that lesson during the Korean War. When he answered &#8220;Staff Sgt. Sargeant,&#8221; the Air Force general calling showed up in person 10 minutes later to see who was playing games.

&#8220;I never really got to know what the war was about until now,&#8221; Pat Sargeant said Tuesday, after spending more than three weeks touring Seoul, Panmunjom and other parts of the country. &#8220;The South Koreans have really got back on their feet. They&#8217;ve done a wonderful job.&#8221;

Sargeant signed up for the Air Force in 1949 and got orders related to the Korean War soon after. He said he was never told in detail about where he was going or what Korea was like. He could pick it out on a map, but that was about it.

During the war, Sargeant flew with the 6th and 37th Troop Carrier squadrons in the 5th Air Force as a radio operator. Their daily missions went from points in Japan to Busan, delivering supplies and paratroopers and returning with wounded men. He never saw much of South Korea, just barren hills and dirt roads and men waiting for rides in C-119s.

Those images were among the first of South Korea for Steve Sargeant, who grew up looking through his father&#8217;s collection of wartime photographs and wearing out his Air Force jacket. Now the younger Sargeant is on his third tour in South Korea in the past 16 years. Even in that time, the general says, the changes in infrastructure, housing and commercial buildings have been remarkable.

For the elder Sargeant, it&#8217;s also been a historic one. He remembers when there was only one bridge crossing the Han River in Seoul; now there are 28, according to his son. During the war, it was easier to make out aerial landmarks than it was to understand the military and political struggles on the ground, Pat Sargeant remembered. This visit, more than 50 years later, puts that in perspective, he said.