General: Russian forces tied down in Ukraine — for now 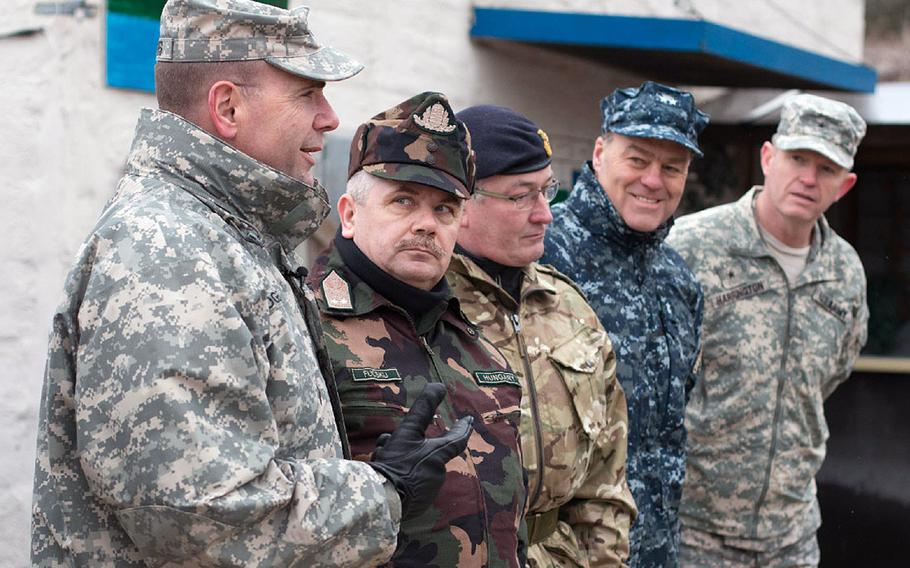 WASHINGTON — The Russian military isn’t capable of carrying out major interventions in the Baltic States or other neighboring countries while it’s tied down in Ukraine, according to the top U.S. Army general in Europe.

For the past year, Moscow has been sending forces and equipment into Ukraine to grab territory and support pro-Russia insurgents.

Thousands of Russian troops, tanks, heavy artillery and other weapons, have moved across the border and helped rebel forces inflict heavy casualties on the Ukrainian army.

In March 2014, Russia annexed Crimea. The Kremlin is now pushing for political autonomy for the regions of Donetsk and Luhansk, the strongholds of Moscow-backed insurgents.

Russia’s actions have stoked fears in neighboring countries worried that they too are in Russian President Vladimir Putin’s sights.

But the commander of U.S. Army Europe doesn’t believe Russia is about to launch a similar operation in other countries.

“This is not the Red Army of the ’80s,” Lt. Gen. Ben Hodges told reporters at a Tuesday breakfast in Washington. Despite recent modernization efforts, “they do not have the capacity yet to do what they’re doing in Ukraine and up in the Baltics at the same time. I think probably three or four years [from now] they will have the capacity. But they don’t have the capacity to do that now, so I’m not worried about that sort of thing.”

But Hodges noted that people in the Baltics, many of whom lived under Russian domination during the Cold War, aren’t so confident.

“If you are from that region you’ll have a completely different view of the seriousness and the credibility of the threat than if you … live in north Florida, where I’m from,” he said.

To reassure jittery NATO allies in Eastern Europe, the U.S. military has been carrying out rotational deployments and training exercises in Estonia, Lithuania, Latvia and Poland. The effort will expand to Bulgaria and Romania later this month. The activities are part of Operation Atlantic Resolve, an ongoing assurance mission.

Commanders in Europe are in the process of deciding where to forward-station heavy weapons and equipment that rotating U.S. forces will use for training exercises with Eastern European allies. The gear includes more than 1,000 vehicles, including 220 “fighting vehicles” such as tanks and armored personnel carriers, according to Hodges.

Much of the gear is being brought over by the Army’s 1st Armored Brigade, 3rd Infantry Division, based at Fort Stewart, Ga. About 3,000 troops from the unit are deploying to Eastern Europe for training exercises with Baltic and Polish forces. When they depart in June, they’ll leave their heavy rolling stock behind in the European theater.

Three basing options are under consideration, according to Hodges. One would be to keep them in Germany, where the U.S. military has a long-standing presence.

Hodges doesn’t see much value in storing them there.

“That’s a huge investment with really not much strategic effect. Nobody [in Eastern Europe] would even know they were there,” he said.

A second option, which Hodges favors, would be to forward base them in Eastern Europe. Hodges believes there would be a much greater strategic payoff if they’re stationed on the territory of allies bordering Russia.

“Every single country … from Estonia down to Bulgaria wants it; in fact they all offered to host the entire thing,” Hodges said.

A third option would be a “hybrid” course, keeping a lot of the gear in Germany and the rest in Eastern Europe.

Hodges expects Air Force Gen. Philip Breedlove, the commander of U.S. European Command, to make a decision “in the next few weeks.”

If a decision is made to put them in Eastern Europe, Coleman Barracks in Mannheim, Germany, will be used as an “interim site” to store the equipment while infrastructure improvements are made in host countries.

When it comes to Ukraine, the Obama administration is weighing whether to send weapons to Ukrainian government forces to help them fight the Russian-backed separatists. During his confirmation hearing in February, Secretary of Defense Ash Carter suggested that he supports such a move. Thus far, U.S. military support has been limited to nonlethal equipment, such as body armor, night-vision goggles, and radars.

Hodges noted that the Ukrainians are at a “disadvantage” in the face of Russian forces and equipment, but stopped short of calling for arming them.

The U.S. military has a plan to train Kiev’s forces. The training of three Ukrainian national guard battalions by American soldiers was supposed to begin this month, but it was postponed as the U.S. waited to see whether last month’s ceasefire agreement would hold.

As the fighting continues, Hodges anticipates the training will go forward next month, although he hasn’t received orders to that effect.