‘General’ returns on loan to Korea 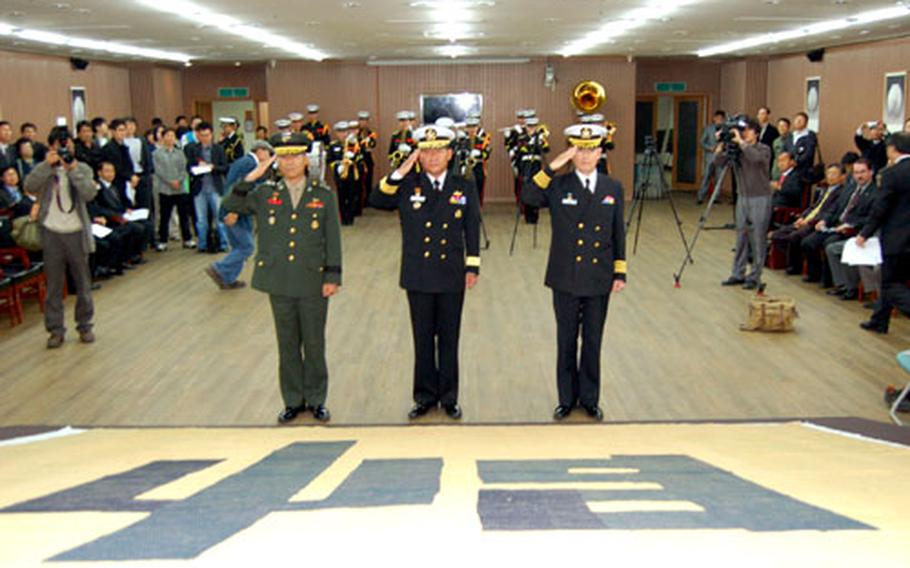 SEOUL &#8212; Officials from the South Korean navy and the Korean Cultural Heritage Administration officially welcomed home the &#8220;General&#8221; on Monday after 136 years on foreign soil.

Made of hemp cloth about 13 feet by 14 feet, with the Chinese letter for &#8220;General&#8221; stitched in black, the former Korean battle flag was captured by U.S. forces in 1871 and later displayed at the U.S. Naval Academy.

The flag was returned to South Korea on Sunday as a loan from the academy and was unveiled to the press during a brief ceremony at the National Palace Museum of Korea.

After being examined and given a preservation treatment, the flag will go on public display in March.

&#8220;This flag is a greatly important relic to Koreans. The war broke out in 1871 and became a critical turning point in our modern history,&#8221; said Chae Su-hee, spokeswoman for the Korean Cultural Heritage Administration.

The flag was captured by U.S. naval forces after a failed diplomatic mission to the Joeson Dynasty turned into armed conflict.

Korean Gen. Uh Je-yeon, along with 350 of his troops, died in the battle. Only three Americans were killed.

While the U.S. forces crushed Korean defenses, an information paper provided by the cultural-heritage group said, the United States considered it an empty victory, because Korea remained closed to diplomatic ties with America.

According to a Korean Cultural Heritage Administration press release, the group requested that the flag be returned permanently to Korea, but U.S. Naval Academy officials told the organization that U.S. law concerning the matter would need revision, as well as the approval of the U.S. president and Congress.