General: Pre-Afghan election approach paying off, but at a cost 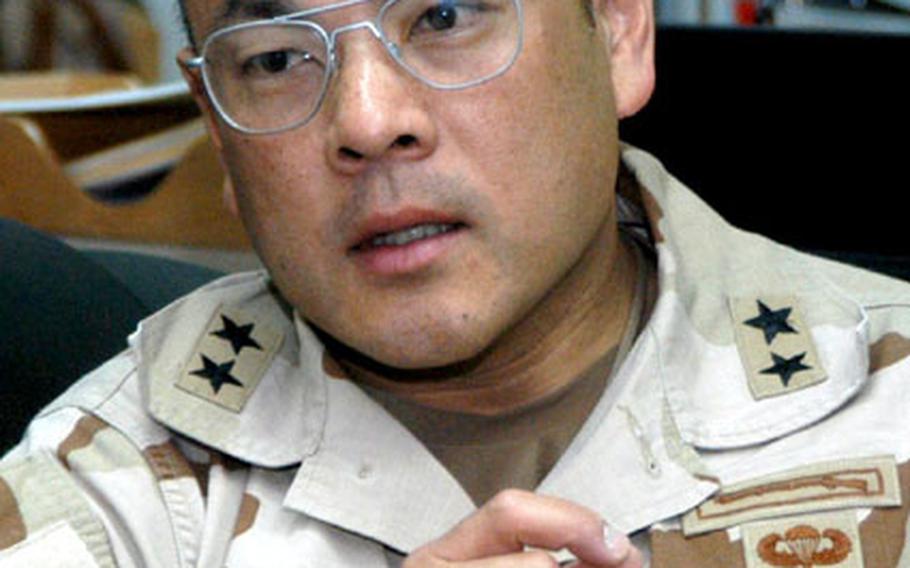 BAGRAM AIR BASE, Afghanistan &#8212; A more aggressive U.S. effort to find and kill Taliban and other insurgents before they can disrupt upcoming elections is the reason that U.S. casualties in Afghanistan have jumped to their highest level since the war began, according to Maj. Gen. Jason Kamiya, who has headed U.S.&#8211;led coalition military efforts since March.

&#8220;Last year, what we saw through our analysis, the enemy was holding his reserve in sanctuaries just prior to the election,&#8221; said Kamiya, commander of Combined Joint Task Force-76, headquartered at Bagram. &#8220;I wanted to rob him of that capability.&#8221;

But the push before the Sept. 18 elections also has taken a toll on U.S. servicemembers&#8217; lives. Since January, 75 U.S. servicemembers have died, according to icasualties.org, a Web site that compiles a list of dead U.S. servicemembers from U.S. Defense Department news releases. The number of dead is up from 52 in all of 2004, the second most lethal year for U.S. troops in Afghanistan. Since military operations began in October 2001, 229 troops have died.

This month, 15 were killed, primarily in roadside bombings.

June saw the greatest number of U.S. casualties. Three Navy SEALs were killed in an ambush, and all 16 troops aboard the Chinook sent to rescue them were killed by a rocket-propelled grenade. In all of June, 27 U.S. servicemembers died.

Kamiya said he believes the more aggressive strategy is effective, based not only on the higher numbers killed, but also on the fact that the fighters are getting younger &#8212; 14 to 16 years old in some cases. That shows, Kamiya said, that the number of older, more experienced fighters is dwindling. Furthermore, he said, payments for working against the United States have gone up, and there&#8217;s been intelligence that some madrassas &#8212; religious schools which often teach holy war &#8212; have been closed so that those young jihadists can go out and fight.

O&#8217;Hara said three suspected Taliban fighters this month blew themselves up trying to place improvised explosive devices in the road, another indicator more inexperienced men are being used.

According to Afghan officials quoted in media reports, fighters are coming into the country from across the Pakistan border, and al-Qaida was focusing again on Afghanistan, sending in a unit of fighters from Iraq to teach locals new tactics.

The Afghan National Army soldiers and police who fight alongside the Americans have suffered increased casualties as well. More than 40 Afghan soldiers have been killed since March, according to media reports, and more than 50 policemen were killed in June and July.

The more aggressive approach is only part of the strategy to forestall violence before elections in which some 5,000 candidates are vying for some 400 spots in national and provincial legislative bodies, Kamiya said.

His task force has also been spending millions of dollars building schools and other infrastructure, timed to be finished shortly before the elections, advertised as broadly as possible and credited to Afghanistan&#8217;s fledgling federal government, as a way to boost hope and interest in the elections, he said.

The projects also employ local Afghan men, especially younger ones, trying to turn them into craftsmen instead of insurgents.

Mohammed Omar, the one-eyed cleric who led the Taliban through the U.S. invasion and has eluded capture, recently vowed to disrupt the elections, according to news reports, although he said polling places would not be bombed. He wanted to avoid killing civilians, he said.

Attacks are expected to continue, O&#8217;Hara said, but in a more manageable way than they otherwise would have been without the focus on killing insurgents in their staging areas.