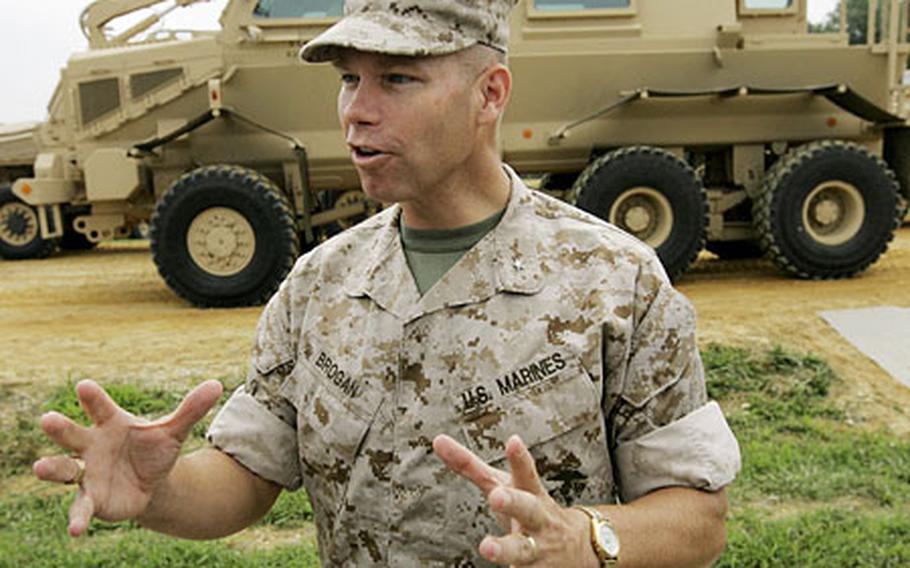 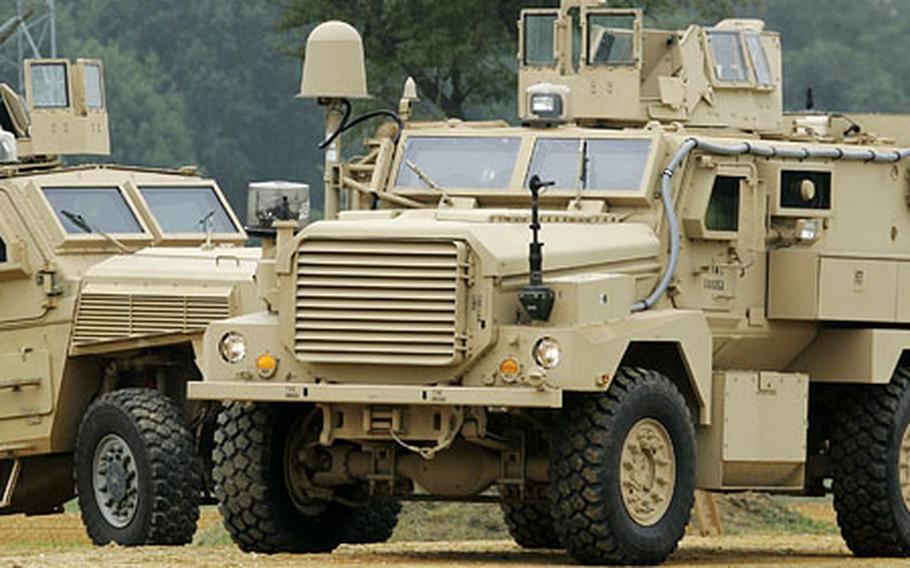 A Category I mine-resistant ambush-protected (MRAP) vehicle, is driven on a test course during a media demonstration, Friday at Aberdeen Proving Ground, Md. (AP Photo)

ABERDEEN, Md. &#8212; Media reports about blast-resistant vehicles are making them &#8220;symbolic targets,&#8221; said the head of the organization tasked with purchasing the vehicles for all branches of the service.

Brogan declined to talk about how many vehicles would end up in Iraq and how well they withstood certain roadside bombs.

&#8220;You have to understand that as we field these things, because of what you all are doing and how much you are touting how much they protect our troops that these are becoming symbolic targets, and that in itself is not a good thing,&#8221; Brogan said at the end of a question-and-answer period with the press.

Brogan declined to answer a follow-up question, and with that the news conference ended.

Friday&#8217;s event was held at Aberdeen Proving Ground in Maryland. Reporters were invited to take pictures of and ride in the vehicles.

The MRAPs being tested at Aberdeen have undergone various improvements over the past couple years that have made the vehicles more &#8220;survivable,&#8221; said Col. John P. Rooney, commander of U.S. Army Aberdeen Test Center.

&#8220;I can tell you with great confidence that these vehicles are going to save thousands of lives,&#8221; Rooney said.

The event was scheduled before Stars and Stripes and other media outlets reported that the Defense Department had revised the estimated number of MRAPs expected to be in Iraq by the end of this year from 3,500 to 1,500.

At first, a Defense official explained that the reason for the decrease is the Defense Department does not have as many manufacturers for the vehicles as it initially hoped.

But Pentagon Spokesman Geoff Morrell later said production was not the issue, rather it takes time to outfit the vehicles with the necessary gear and ship them to Iraq.

The extra gear is installed at a Space and Naval Systems Command Center in Charleston, S.C., said SPAWAR spokesman Steven A. Davis.

Most of the equipment installed, &#8220;Allows users to communicate internally within the vehicle, communicate externally with other vehicles and identify enemies and/or friendly forces,&#8221; Davis said in an Aug. 13 e-mail to Stars and Stripes.

Asked Friday if more vehicles were being produced than SPAWAR could handle, Brogan said no.

Brogan declined to say how many MRAPs that SPAWAR is equipping with gear now and how many it will be able to do so when MRAP production hits its peak.

He also explained that he did not want to talk about how many MRAPs are going to Iraq because he does not want the enemy to know how soon the vehicles will be downrange and where they will be.