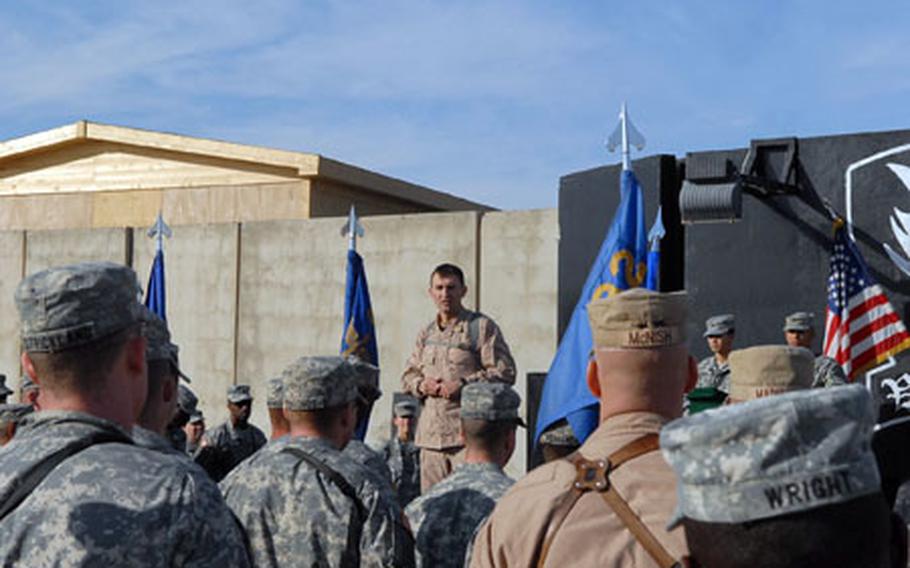 TIKRIT, Iraq &#8212; The apparent downing of four American helicopters in Iraq since Jan. 20 has U.S. military officials saying they will adjust to the possibility that insurgents are more able to attack aircraft.

In Baghdad, Maj. Gen. William Caldwell, chief U.S. military spokesman in Iraq, said Sunday that it appears that the three Army helicopters and one civilian aircraft were shot down.

Caldwell said the losses apparently were due to &#8220;some kind of anti-Iraqi ground fire&#8221; but added that investigations into the incidents had yet to be completed.

The Associated Press reported it was the first time that a senior figure in the U.S. Iraq command had said publicly that all four helicopters had been shot down.

Some U.S. commanders in the field say they have begun to revise their methods in face of the potential trend. But they declined to offer specifics.

Col. A.T. Ball, commander of the 25th Infantry Divison&#8217;s Combat Aviation Brigade based in Camp Speicher in northern Iraq, said that any recent success insurgents have had in attacking helicopters should not be overstated.

With 1.5 million hours of flight time in support of the American mission in Iraq, &#8220;the number of successful shoot-downs (of American military aircraft) are very low,&#8221; he said.

According to the latest numbers from the Brookings Institution&#8217;s Iraq index, more than 52 American military helicopters have been lost since May 2003, with about half of those shot down by enemy fire.

The latest crash occurred Friday near Taji, about 15 miles northwest of Baghdad. Two soldiers were killed while conducting operations, officials said. Hours after the crash, a militant group calling itself The Islamic State of Iraq claimed responsibility for downing an Apache helicopter.

A man claiming to be an eyewitness told the New York Times that gunmen hid by a manufacturing plant near Taji, a hub for helicopter traffic around Baghdad, and managed to shoot down one of two low-flying Apaches that approached just after sunrise.

The other recent crashes include a Black Hawk north of Baghdad and another military helicopter, believed to be an Apache, lost during a raid on insurgent forces in the southern province of Najaf. The downed civilian aircraft belonged to the security firm Blackwater USA.

According to John Pike, of GlobalSecurity.com, a military information Web site, U.S. forces should be concerned of the latest crashes because of &#8220;newer more modern and effective anti-aircraft missiles.&#8221; Helicopter countermeasures are probably effective against the 1960s era SA-7, but &#8220;their effectiveness against the 1980s era SA-18 is less certain,&#8221; he cautions.

In Tikrit, Ball said Friday&#8217;s attack, if it unfolded as related by the eyewitness, seemed to be a &#8220;complex attack,&#8221; with insurgents lying in wait and concentrating their fire on the aircraft. But he did not believe insurgents were intensifying their focus on helicopters. &#8220;They have been trying to do this all along, they just haven&#8217;t been successful,&#8221; he said.

American forces would not suffer the same fate as the Soviets in Afghanistan, who faced fighters who became skilled at shooting down Soviet helicopters, Ball said. The centralized Soviet military did not allow field personnel to adapt to changing conditions or emerging threats, he said. The U.S. Army on the other hand, &#8220;is decentralized and commanders are encouraged to adapt and morph.&#8221;

&#8220;The danger when you have these shoot downs is to be knee-jerk about it,&#8221; said Lt. Col. Frank Tate, commander of the 2nd Battalion, 25th Combat Aviation Brigade. &#8220;In the meantime we make immediate adjustments, to equipment, tactics, procedures until we have all the facts.&#8221;

Investigations into crashes are conducted by a kind of CSI team of examiners who weigh a multitude of factors in pinpointing the cause. It is still too early to fully attribute the recent helicopter losses to an improved or better equipped enemy, he said.

Helicopters are central to any campaign, but more so in Iraq, because of all the young soldiers being killed by roadside bombs, said Lt. Col. Michael Fleetwood, commander of the 3rd Battalion, 25th Aviation Regiment.

Fleetwood&#8217;s company of Chinook helicopters ferries equipment, soldiers and supplies throughout Multi-National Division-North over an area slightly larger than the state of Pennsylvania. But the value of a helicopter is more than material in a fight; they also carry symbolic importance, he said. &#8220;I think (insurgents) have always want to shoot down an aircraft especially if they can videotape it and exploit it,&#8221; he said. &#8220;But we&#8217;ve made it very difficult (to shoot them down).&#8221;