General gets earful from Okinawa governor 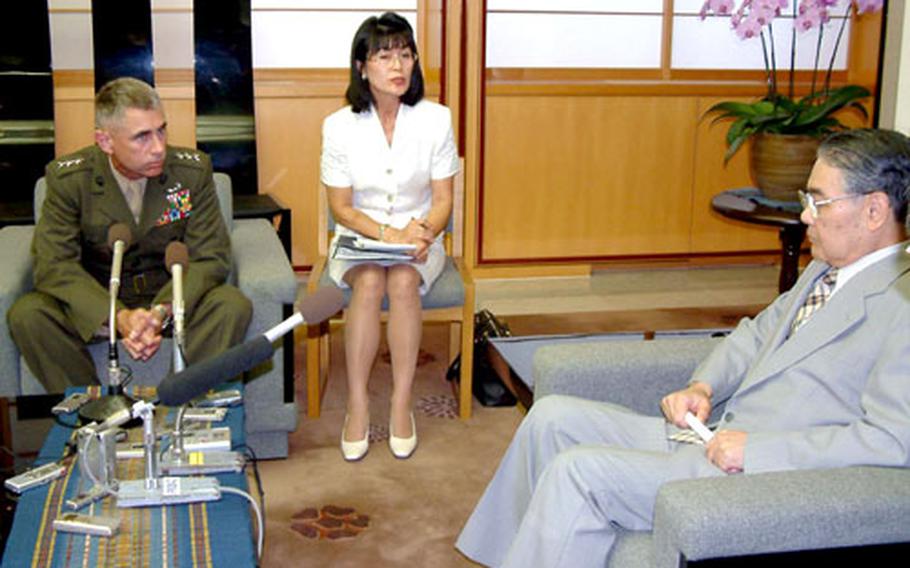 &#8220;I feel bad that I have to bring up nothing but harsh and unpleasant issues to you for your first visit,&#8221; Inamine said as the media cameras clicked and whirred.

&#8220;The ultimate desire of Okinawan people is to reduce the presence of the military, not only the base land but also the number of troops stationed on the island,&#8221; Inamine said. &#8220;We also hope that training conducted on the island will be minimized, and, if possible, held outside Okinawa &#8212; or outside Japan.

&#8220;I understand that it is a very important and emotional issue with the people of Okinawa,&#8221; Blackman responded. &#8220;And I understand that many Okinawans do share a concern with regard to the U.S. forces here. But, frankly, that has to take place on a government-to-government level.&#8221;

U.S. bases cover about one-fifth of Okinawa&#8217;s main island. U.S. and Japanese officials are in the middle of a process to return about 21 percent of that property.

Reducing the troop level is not planned.

&#8220;I have been repeating and pressing the same points to successive area coordinators ... about the sentiment of Okinawan people toward the military,&#8221; Inamine said, acknowledging that Marine commanders have &#8220;given consideration to this sentiment.&#8221;

Blackman served on Okinawa in the 1980s.

He said every time a servicemember commits a crime or is involved in an accident, the resentment to the presence of the troops grows.

&#8220;I often refer to this situation as a dot and line,&#8221; he said. &#8220;For instance, when an accident involving a servicemember occurs, it is an isolated accident&#8221; which U.S. commanders may consider &#8220;as a dot. But, for people of Okinawa, it is one of many accidents that have happened in the past 58 years, and all these accidents are connected in a long emotional line.&#8221;

U.S. troops have been on Okinawa since a bloody 84-day battle in 1945. The island prefecture was returned to Japan in 1972.

&#8220;I am committed to doing everything that we can to reduce the accidents and incidents,&#8221; Blackman said. &#8220;Those who fail to conduct themselves as they should ... we will deal with them and hold them accountable.&#8221;

He said he understood Inamine&#8217;s concern and praised Okinawans&#8217; hospitality.

He said the U.S.-Japan Security Treaty is &#8220;integral to preserving the security and, frankly, prosperity, of this region of the world.&#8221;