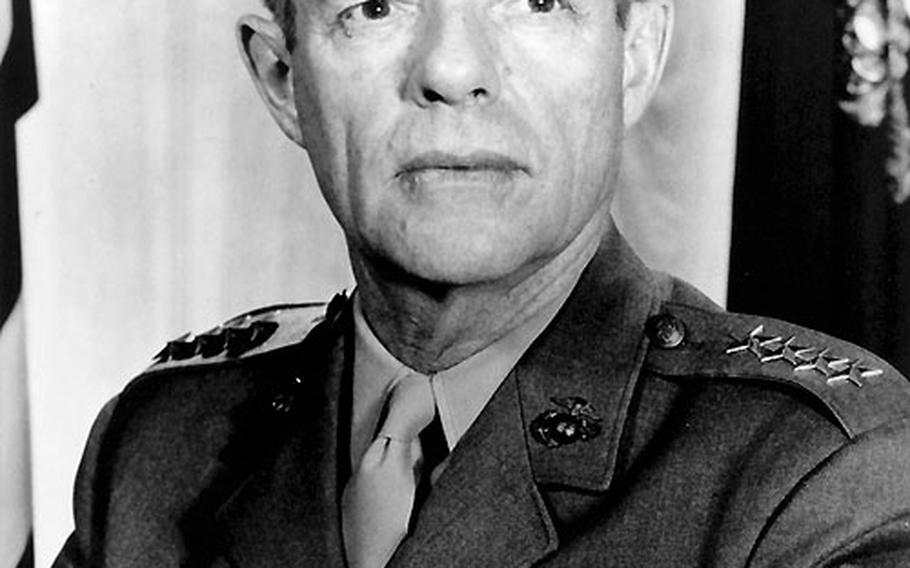 ARLINGTON, Va. &#8212; The 23rd Commandant of the Marine Corps, retired Gen. Wallace M. Greene Jr., died Saturday of cancer at the age of 95, according to a Marine Corps press release. He will be buried April 3 at Arlington National Cemetery with full military honors.

The Vermont native served as commandant from 1964 to 1967. He graduated from the U.S. Naval Academy in Annapolis in 1930, was commissioned as a 2nd lieutenant and served throughout the United States, including the Marine Barracks in Washington, Navy Yard, Portsmouth, New Hampshire and two years aboard the USS Tennessee.

In 1937, Greene joined the 4th Marine Regiment in Shangai, China. Two years later, he served with the 1st Marine Division at Guantanamo Bay, Cuba. In 1941, he participated in commando training in Britain, and in 1943, took part in the planning and execution of the invasion of the Marshall Islands. In 1944, he was the operations officer for the 2nd Marine Division for the Saipan and Tinian operations.

After graduation from the National War College in 1953, Greene became special assistant to the Joint Chiefs of Staff for National Security Affairs. In 1955, he served as assistant division commander of the 2nd Marine Division, and in 1956, became commanding general of the Recruit Training Command at Parris Island, S.C., followed by commander of Marine Corps Base, Camp Lejeune, N.C.

He returned in 1958 to Headquarters Marine Corps in Arlington and served as operations officer and then deputy chief of staff for Plans. He was promoted to lieutenant general in January 1960 and named chief of staff. Gen. Greene retired Dec. 31, 1967, and lived in Northern Virginia.

He is survived by his daughter, Vaughn E. Greene, and his son, retired Marine Lt. Col. Wallace M. Greene III.

In lieu of flowers, donations may be sent to: Catholic Charities of Arlington, 200 North Glebe Road, Arlington, Va. 22203.