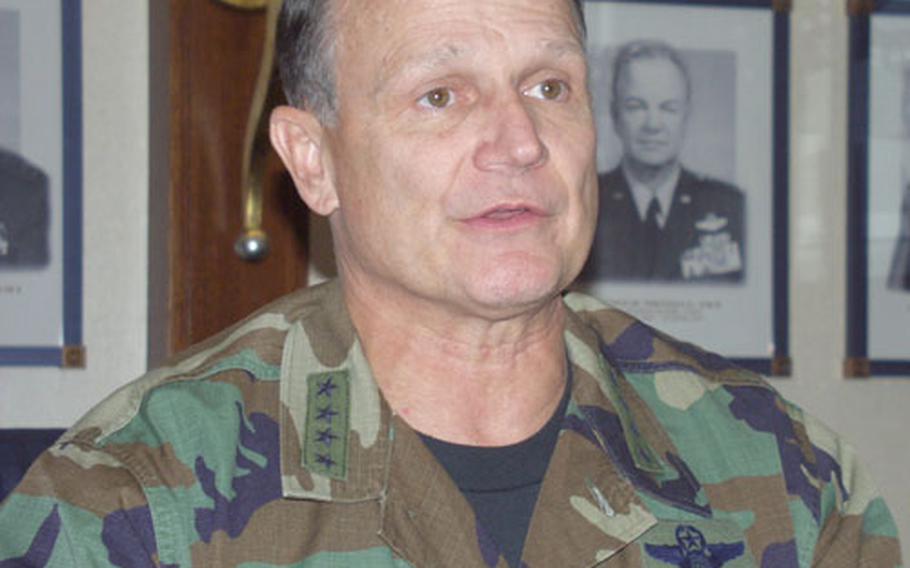 RAMSTEIN AIR BASE, GERMANY &#8212; As Gen. Gregory S. Martin moves on from his command of U.S. Air Forces in Europe and NATO Allied Air Forces North on Tuesday, he leaves Europe with ideas for the future.

In a glimpse of what may lie ahead, the nearly four-year commander included servicemember issues and family concerns in remarks Friday at Ramstein Air Base.

Challenges of the future include solidifying partnerships with other nations, transforming the forces, USAFE&#8217;s role in fighting terrorism, and continuing change while maintaining retention and high morale.

&#8220;But we have to realize there is some hard elbow grease that we have to apply to the problem. We have to be sensitive to the status of these issues and we have to work them every day.&#8221;

Martin&#8217;s next assignment is at Wright-Patterson Air Force Base, Ohio, where he will command the U.S. Air Force Materiel Command.

Gen. Robert H. Fogelsong, former Air Force vice chief of staff, will be the man to face these problems as Martin&#8217;s successor. Martin said he has faith Fogelsong can meet the challenges.

The challenges presented by anti-Western ideas may be Fogelsong&#8217;s toughest problem, Martin said.

He explained that nodes of terrorists are everywhere, and even if places seem safe, servicemembers must always remain alert.

Another huge challenge is the integration of the Eastern Europe countries into NATO, Martin said.

&#8220;That relationship must be nurtured and developed in a meaningful way for these people or you might find that we will see a fracturing of the European continent,&#8221; he said.

He said family issues such as housing, education, and time away from home remain at the tips of everyone&#8217;s tongues when deciding whether to move troops into Eastern Europe, with their families or without them.

Regardless of the transformation, Martin said, the Air Force will always have the need for a base to support the movement of people and equipment for missions within the NATO alliance or U.S. missions outside of NATO.

For this reason, Martin sees Ramstein as a critical base that will remain open because of its importance to the military. That should give families some peace of mind amid the uncertainties of transformation, he said.