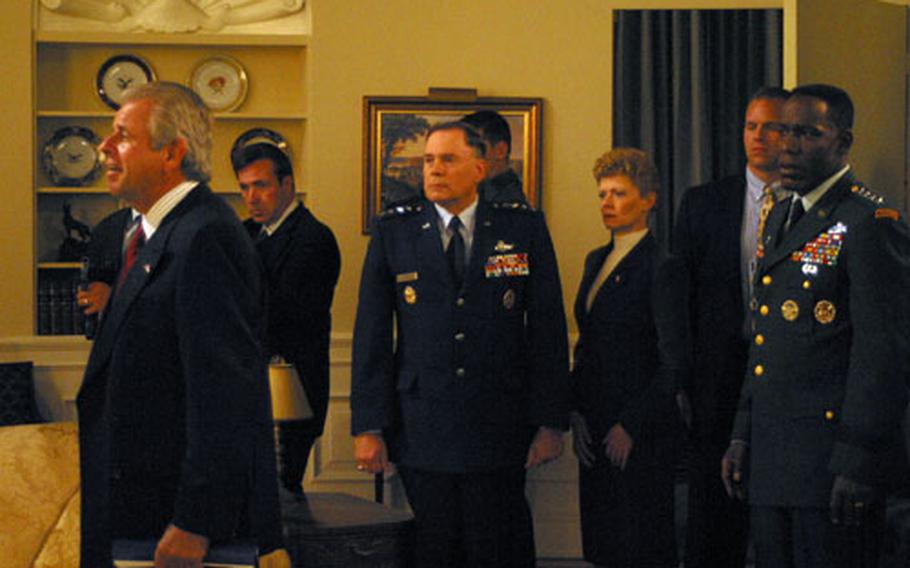 Air Force Chief of Staff, General John Jumper, plays himself, and actor William Devane plays the president during the shooting of a scene in the Oval Office on an episode of Stargate SG-1. The episode starring the chief of staff will air on the Sci-Fi Channel March 19. (Courtesy of Air Force Entertainment Liaison Office)

Air Force Chief of Staff, General John Jumper, plays himself, and actor William Devane plays the president during the shooting of a scene in the Oval Office on an episode of Stargate SG-1. The episode starring the chief of staff will air on the Sci-Fi Channel March 19. (Courtesy of Air Force Entertainment Liaison Office) 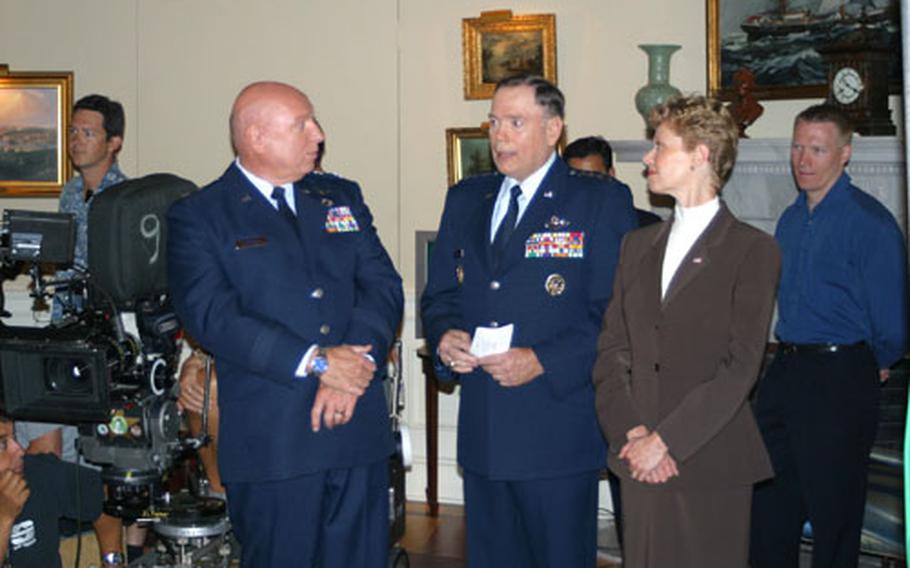 Air Force Chief of Staff, General John Jumper, on the set of Stargate SG-1 will play himself in an episode of the series alongside actors Don Davis and Colleen Winton. (Courtesy of Air Force Entertainment Liaison Office)

Of course, if Jumper has actually been assigned that third one, the Air Force no doubt keeps the evidence locked up in the file along with photos of the long-rumored Area 51&#8217;s &#8220;visitors from outer space.&#8221;

But servicemembers who are stationed overseas will have to wait to view the four-star&#8217;s performance &#8212; while Air Force Radio and Television Station (AFRTS) carries &#8220;Stargate: SG-1,&#8221; the military channel is still on Season 6.

The &#8220;Stargate: SG-1&#8221; series is based on a 1994 movie of the same name that starred Kurt Russell and James Spader, and now stars Richard Dean Anderson, formerly of MacGyver fame.

Supposedly based at the Air Force&#8217;s base at Cheyenne Mountain, Colo., the show&#8217;s plots revolve around a mysteriously indestructible portal called the Stargate, which is a time-space travel machine that instantly transports objects or people anywhere in the universe.

The show&#8217;s producers first approached the Air Force about using Jumper as a character in January 2003, according to Doug Thar, the Air Force&#8217;s films, documentary, and special effects coordinator.

The Air Force&#8217;s relationship with &#8220;Stargate: SG-1&#8221; actually goes back almost seven years, when producers first approached the Air Force to help make sure scripts and characters &#8220;accurately reflect the Air Force,&#8221; Thar said in a Wednesday interview in the Pentagon.

The Air Force reviews the script for every &#8220;Stargate: SG-1&#8221; episode, and suggests necessary changes, such as the time a writer had given an airman character the Army rank of sergeant major, Thar said.

The Air Force has also provided the series with aerial footage of fighter jets; an honor guard for a funeral scene; and even a C-130 transport for use as a ground prop, Thar said.

Both sides benefit from the partnering, Thar said.

Jumper is not the first Air Force leader to appear on the long-running series. Former Air Force Chief of Staff Gen. Michael Ryan appeared in an episode in Season 4 back in the late 1990s.

Jumper originally agreed to be filmed last April. But the war in Iraq interfered with the original plan, and the general did not have time to travel to Vancouver until last August, Thar said.

Jumper was originally scheduled to appear in three scenes, but writers were so pleased with his performance that they wrote him into a fourth, Thar said.

In his first appearance, Jumper, who plays himself, has the grim task of giving the president bad news: &#8220;Mr. President, a short time ago, our space-based radar detected three [alien] vessels emerging from outer space,&#8221; Jumper says.

But Thar, who spent the day on the set with his boss, said that said Jumper never complained.

The Air Force chief was not paid for his appearance, Thar said.

Jumper was on leave Wednesday and unavailable for comment on his acting experience.

But apparently, the four-star prefers his Air Force duties to Hollywood&#8217;s lure.