Gen. Jones has his hands full as he takes over as EUCOM and NATO chief 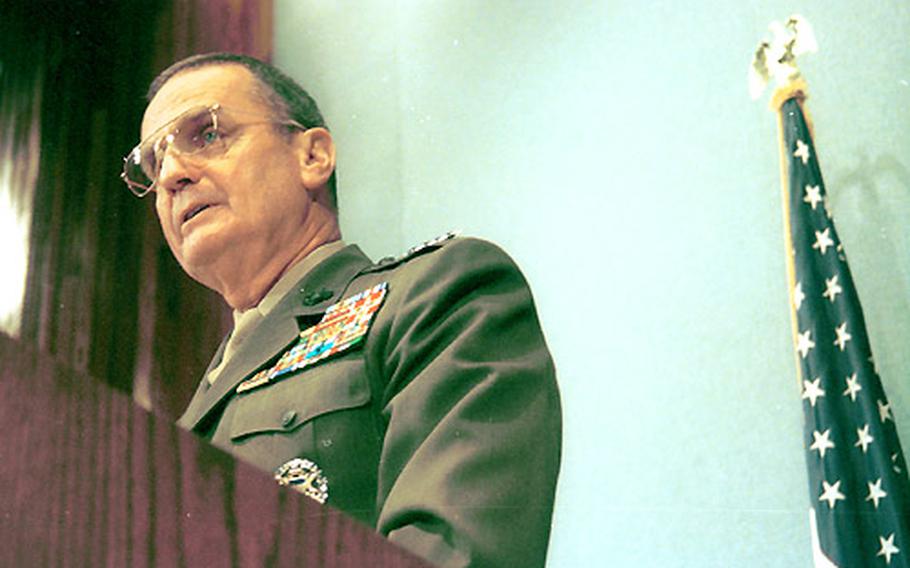 It was nearly 12 years ago when then-Col. James Jones led a task force built around his 24th Marine Expeditionary Unit through Turkey and into Northern Iraq.

Dubbed Operation Provide Comfort, the near-forgotten footnote to the 1991 Persian Gulf war marked the first time U.S. forces squared off with Saddam Hussein after the Iraqi Army was driven from Kuwait.

&#8220;After the war ended, when some million Kurdish refugees were huddled freezing in the mountains on the Turkish border, the Turks were afraid to let them in their country and we didn&#8217;t want to let them starve,&#8221; Deputy Defense Secretary Paul Wolfo-witz reminded members of a think tank in Washington, D.C., in October.

&#8220;Jim Jones and his Marines faced the Iraqi army and, without firing a shot, were able to move them out of the northern third of their country and to create a sanctuary that is still largely observed to this day.&#8221;

With U.S. war planners eager to use Turkey as a second front for any invasion of Iraq, the experience is sure to be among those that now Gen. Jones will draw from as he takes the helm of both U.S. and NATO forces in Europe over the next two days.

Continuing beyond what has traditionally been the ultimate job for any Marine officer, Jones turned over command of the 175,000-strong Marine Corps to Gen. Michael Hagee on Monday.

Slated to relieve Air Force Gen. Joseph Ralston in a Thursday afternoon ceremony at U.S. European Command&#8217;s Patch Barracks headquarters in Stuttgart, Germany, Jones will become the command&#8217;s 13th top general in its 51-year history. He will be the first Marine to hold the post.

On Friday, the two officers will again face each other as Ralston passes leadership of NATO to Jones in Mons, Belgium.

Jones takes over both jobs at pivotal times.

If there is war with Iraq, Jones will be responsible for the conflict&#8217;s northern and western flanks, as well as oversight of key logistics efforts.

With about 100,000 soldiers, sailors, airmen and Marines, EUCOM&#8217;s area of responsibility is far bigger than just Europe itself, encompassing most of Africa and several key countries in the Middle East as well.

Iraq neighbors Turkey, Syria and Israel, for example, all fall under EUCOM&#8217;s purview.

From the beginning, those missions have been flown from Incirlik air base in Turkey.

While the NATO ally continues to publicly debate whether Turkey will support a new war against Iraq, U.S. military inspection teams were allowed to begin surveying bases and staging facilities inside Turkey this week. War planners hope to position as many as 80,000 troops there to open a northern front against Iraq, according to reports.

&#8220;Turkey is going to be a key consideration for Jones,&#8221; said Steven Everts, a senior analyst Center for European Reform, a London-based think tank. &#8220;Their big issues are what is the post-Saddam plan and what will happen with the Kurds?&#8221;

Meanwhile, the Army is moving forward with plans to overhaul how the units are manned in Europe. One of the main options under consideration is replacing the current system of accompanied tours, where individual soldiers are assigned to units already in Europe, with a rotation of entire units into Europe without family members.

That&#8217;s exactly the model used by Jones&#8217; Marine Corps in places like Okinawa, where most combat units rotate into the Japanese island every six months from the United States. The Marines are based there primarily to standby should war erupt in Korea.

It&#8217;s the need for that kind of expeditionary mind-set that Jones&#8217; assumption to the head of EUCOM underscores, said Richard Burt, who served as the top diplomat to Germany under both the Reagan and elder Bush administrations.

&#8220;The strategic message here is that the Europeans need to enhance their own power projection capabilities,&#8221; said Burt.

Even as NATO prepares for another round of expansion over the next year, for the alliance to remain relevant it must become more prepared to launch operations beyond its borders, said Burt.

Everts agrees and the first place that may be put to the test is after any war with Iraq.

&#8220;While I don&#8217;t think we&#8217;re going to see tanks under a NATO flag rolling towards Baghdad, [I] do think there will be significant NATO involvement after the war is over in stabilization operations.&#8221;