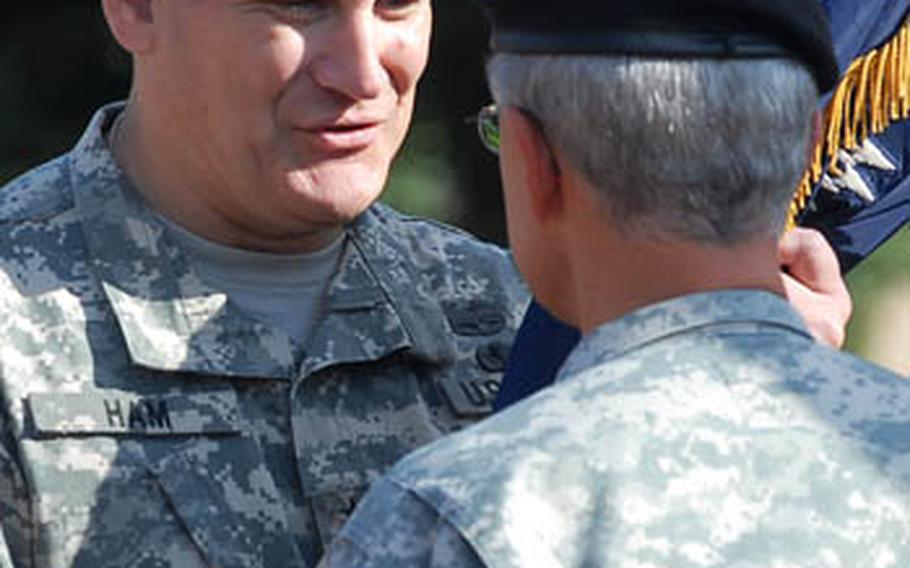 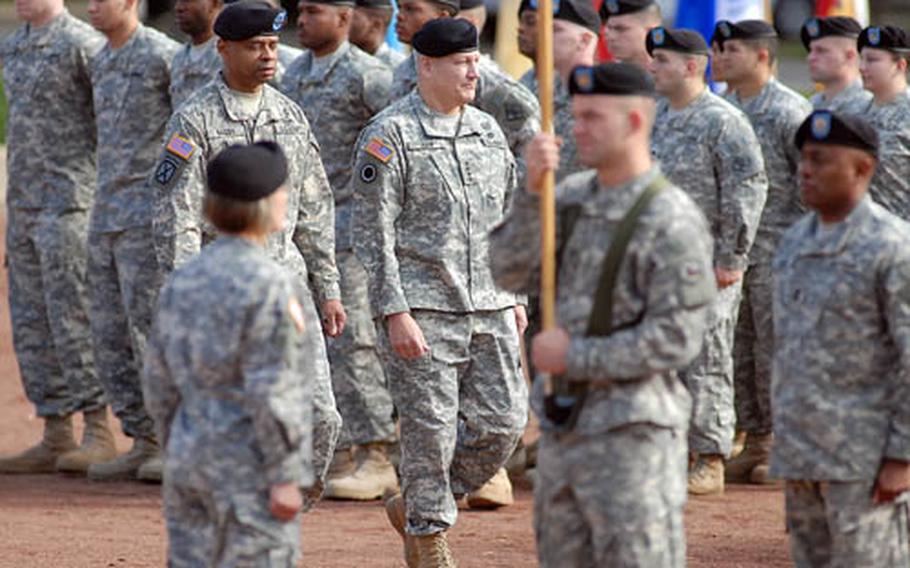 HEIDELBERG, Germany &#8212; In March, he briefed the press on what defense officials did after the Air Force mistakenly shipped four fuses for Minuteman nuclear warheads to Taiwan.

In April, he discussed Iran&#8217;s role in sending arms to Afghanistan and Iraq, and the importance of the U.S. having two aircraft carrier strike groups in the Persian Gulf.

Not bad for a guy who started his Army career as a grunt with the 82nd Airborne Division.

Gen. Carter Ham, U.S. Army Europe&#8217;s new commander, was an enlisted man for a year and among the first group of enlisted soldiers to attend college and then become officers through the "Green to Gold" program in 1974. It was a long time ago, he said, but "it gave me a good perspective."

On Monday, Ham told some of his core beliefs to those who were gathered at Campbell Barracks for his assumption of command ceremony.

"I believe our highest priority is that soldiers are prepared" if they need to deploy, getting tough but safe training, he said.

Ham said he believed wounded soldiers must get the very best care; that families deserved the best schools and services possible; and that one of the U.S. military&#8217;s strengths is "the diversity in our ranks."

"I believe," Ham said, "our soldiers, civilians and families represent the very best of America."

Ham, USAREUR commander for a little more than a week, said he knew that changes in the command brought about by Army transformation also brought uncertainty.

Ham also spoke in German at length, reflecting perhaps, his previous European tours, including commander of the 1st Battalion, 6th Infantry in Vilseck; senior observer/controller at the Combat Maneuver Training Center in Hohenfels; and chief of staff for the 1st Infantry Division.

Before the ceremony, he told a group of news reporters that he remembered arriving in Vicenza, Italy, 31 years ago as a "kind of scared second lieutenant &#8230; with a very pregnant wife."

"Never in my wildest imagination did I think I&#8217;d be standing here today," Ham said.

But Gen. John Craddock, commander of the U.S. European Command said: "I don&#8217;t think there could have been a better choice, a more perfect fit."

Ham, Craddock said in his speech, "understands what makes soldiers and families tick. &#8230;"

Gen. Kenneth Hunzeker, V Corps commander, also had praise for Ham, whom he said he&#8217;s known and admired for 11 years.

Ham was commander of the Multinational Brigade-North in Mosul, Iraq, when, on Dec. 22, a suicide bomber killed 22 people, including 14 American troops and four American civilian contractors, inside a mess tent on Forward Operating Base Marez in Mosul.

"It was the worst day of my life," Ham said on Monday when asked about it. "Hands down."

Just days after the bombing, Ham discussed what he called the "terrible and gut-wrenching loss" with CNN. When asked if force protection could have been better, Ham said intelligence-based assessments had been made daily to counter threats.

"But clearly in this instance, I failed to identify some shortcoming that allowed this to occur," Ham said.

His previous job before coming to USAREUR was as director of operations for the Joint Staff.

That meant Ham was supposed to know everything that was going on with all the operational forces, to brief the Joint Chiefs and the American public through the press.

That job, he said Monday, gave him a context for how the forces in Europe fit into the global picture. "I think Europe for many years was primarily a force provider," he said. "Now I think there&#8217;s an increasing awareness that Europe is important for many reasons."

Ham is the 35th commander of U.S. Army Europe since 1942 and is expected to be its last. Next July, as V Corps is officially inactivated, the command is to be reborn as Seventh Army.