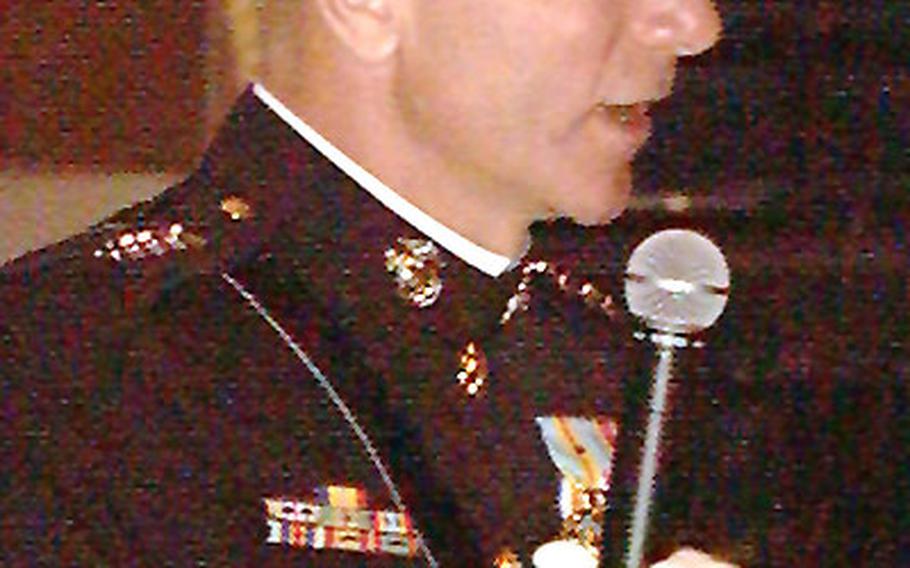 Several ice scupltures, including this one of the Marine&#39; Corps&#39; eagle, globe and anchor, were used to decorate the reception following the Passage of Command ceremony. (Sandra Jontz / S&S)

The general&#8217;s comments were light-hearted right from the start, when he chose not to stand behind a podium for his official remarks to a crowd of roughly 3,200 who had gathered in the academy&#8217;s Alumni Hall.

Monday&#8217;s pomp and circumstance started with a mini-concert performed by the U.S. Marine Corps Drum and Bugle Corps, also known as the Commandant&#8217;s Own, and the formation of the Honor Guard by Marines from the famous &#8220;8th and I Barracks&#8221; in Washington.

Rumsfeld lauded Jones as a great leader for the way he transformed the Marines.

He applauded Jones for activating the 4th Marine Expeditionary Brigade (Anti-Terrorism), for integrating Navy and Marine Corps aviation and putting Corps aircraft on every naval aircraft carrier, and initiating a bond between the Corps and the U.S. Special Forces Command.

&#8220;With this superb background, I know he will build, shape and continue transform the Marines of the future,&#8221; Rumsfeld said.

Hagee made no mention of a controversy last week when he announced he had stopped wearing three awards because his service record does not contain supporting documentation.

Instead, he was jubilant as he addressed the crowd, which included members of Congress, the Joint Chiefs of Staff, and &#8220;most importantly,&#8221; his family.

Until November, Hagee commanded 45,000 Marines at Camp Pendleton, Calif., as the commanding general of the 1st Marine Expeditionary Force. Monday, he took over as leader of a total force of more than 212,000 active duty and Reserve Marines.

Hagee received a loud roar when he introduced the class of 1968 &#8212; the year in which he graduated in the top 10 percent of his class at the academy.