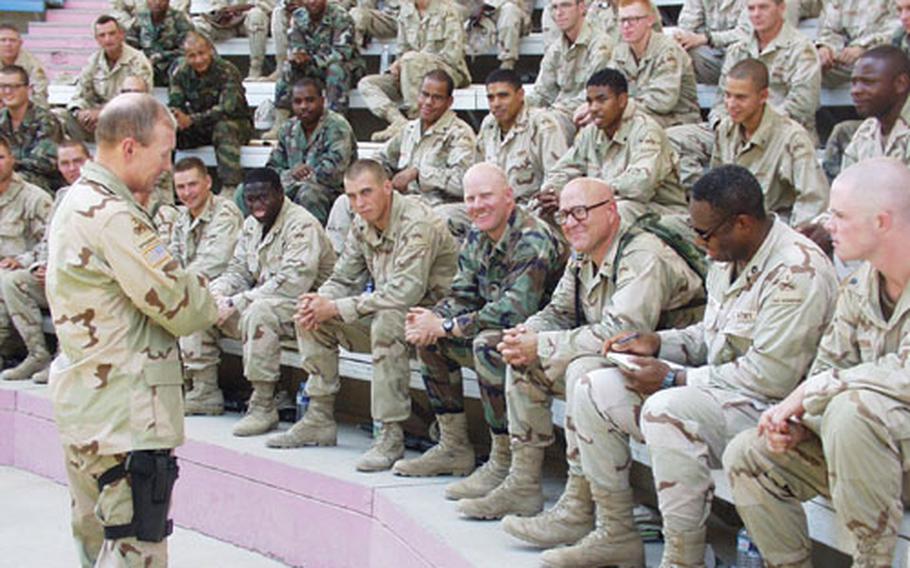 Gen. Martin E. Dempsey, commander of the Wiesbaden, Germany-based 1st Armor Division, talks in Baghdad on Aug. 9 to the "Bandits," the 1st Battalion of the 37th Armor. The temperature in the outdoor auditorium — which was partially shaded — was over 13O degrees. (Lisa Burgess / S&S)

Every night, the Bandits go to sleep in their hot, stuffy tents to the sound of small-arms fire. Tracers make their way in the skies above.

And when the Bandits leave their compound on patrols, raids or supply runs, sometimes they don&#8217;t come back.

So it was no surprise to Dempsey that one of the first questions asked during his visit was &#8220;Sir, who is attacking us?&#8221;

Right now, it&#8217;s former Saddam loyalists and criminals who are angry at U.S. troops&#8217; attempts to interfere with their lawlessness. But all that&#8217;s about to change, he said.

Dempsey is warning his troops to get ready for an enemy &#8220;that wants to make a big, big splash, like dropping the Palestine,&#8221; a major hotel where many Westerners live.

In an environment where one or two soldiers are attacked with improvised bombs every day, such an action seemed less likely to be aimed at civilians.

Then came the Aug. 19 bombing of the United Nations headquarters in Baghdad &#8212; the single worst postwar attack in Iraq, and one that took the lives, not of U.S. soldiers, but civilians.

On Thursday, the top U.S. military commander in the Persian Gulf, Army Gen. John Abizaid, the head of the U.S. Central Command, told Pentagon reporters that terrorism the &#8220;number one security threat&#8221; in Iraq.

But for U.S. commanders such as Dempsey, who are on the ground every day in Iraq, an attack like the one on the U.N. complex was simply a matter of time.

Dempsey said the biggest threats to the coalition are, in order of seriousness, former Saddam Hussein loyalists, common criminals and terrorists.

&#8220;When Saddam Hussein left, he emptied his armories, and he emptied his jails. He did it on purpose, so the people of Baghdad would wish for his presence as a leader.

U.S. troops are also focusing on training a new Iraqi police force, one that should be 16,500 men strong by next spring, Dempsey said. The court and prison systems are also coming back, in a more democratic and just form than under Saddam.

As the regimists give up or are captured or killed, and criminals are starting to get pulled off the street, the threat to both coalition forces and Iraqis is already beginning to shift, Dempsey said.

Most of the 1st AD deployed to Iraq on May 1, and will remain there through April or May 2004. Dempsey took command of the division in July and will pin on his second star in October.

By the time the division is scheduled to leave Iraq, Dempsey said, two of its main goals are to defeat the remaining loyalist members of the regime and &#8220;neutralize&#8221; terrorist forces.

By &#8220;neutralizing,&#8221; Dempsey said he meant &#8220;stopping [the terrorists&#8217;] ability to conduct mass attacks&#8221; against U.S. military forward operating bases; the Baghdad Palace complex, where U.S. civil administrator L. Paul Bremer and other coalition officials live and work; and the Al Rashid Hotel, where troops and other U.S. officials live.

He said he is also determined to protect Baghdad landmarks such as the Palestine and Sheraton Hotels, which house Western charity workers and journalists. Other so-called &#8220;soft targets,&#8221; which generally cannot be protected using traditional military means, such as guard towers, high walls and extensive armor are on his watch list.

Instead of being last on the list, terrorists are becoming the most deadly threat, Dempsey said.

Even after the 1st AD goes home, the job will remain, however, Dempsey said.