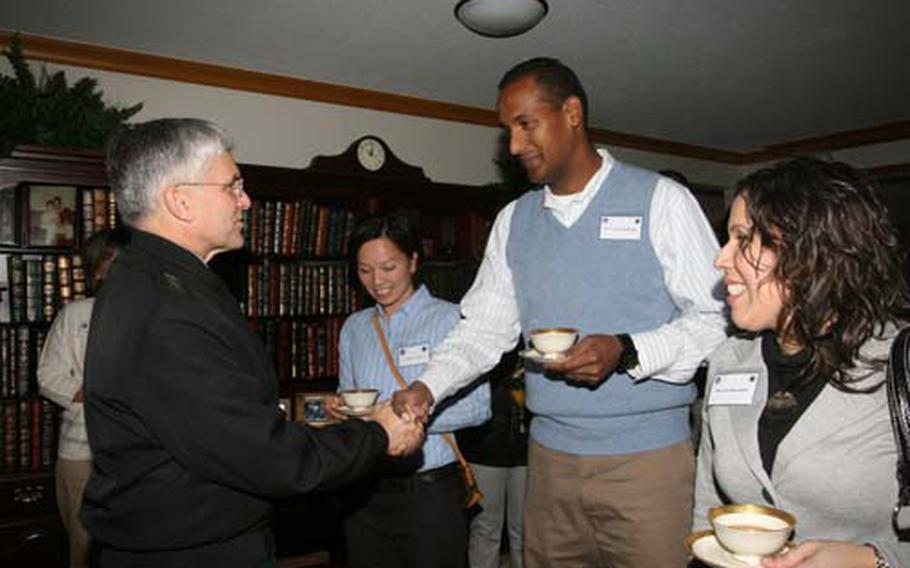 CAMP ZAMA, Japan &#8212; Ending the Army&#8217;s reliance on stop loss to maintain troop levels in war zones is a priority now, even though the practice of keeping soldiers beyond their enlistment won&#8217;t officially end for nearly two more years, the Army&#8217;s chief of staff said Friday during a tour of bases in Japan and South Korea.

By October 2010, the Army will be able to deploy "at a sustainable rotation ratio" without leaning on stop loss, Gen. George Casey said during an interview at Camp Zama.

"For us to get there, we need to &#8230; start weaning ourselves off that as soon as possible," he said. "We must start it sooner rather than later."

Faced with shrinking budgets and a range of global threats, the Army also must maintain its conventional warfare capabilities while sustaining "the world&#8217;s best counterinsurgency force," Casey said.

He also discussed efforts to grow the ranks, expand time between deployments and incorporate training changes.

"We have to deploy offensive, defensive and stability operations and be effective across the full spectrum," he said. "That&#8217;s what we owe the country during this uncertain future in the 21st century.

On Thursday, he spent time with 2nd Infantry Division soldiers at Yongsan Garrison in South Korea, the first stop on a weeklong tour that also will take him to the Middle East.

Casey visited U.S. Army Japan and I Corps (Forward) leaders Friday and also ate breakfast with spouses of deployed soldiers. Later, he went to Tokyo for a meeting with Gen. Ryoichi Oriki, the Japan Ground Self-Defense Force chief of staff.

In a recent essay for Foreign Affairs, Defense Secretary Robert Gates wrote that the Defense Department "must set priorities and consider inescapable tradeoffs and opportunity costs."

On the eve of a new administration, Casey said the Pentagon&#8217;s new "balanced" approach to national defense should have little effect on soldiers based in the Pacific.

The move will increase time at home with families and give units a larger window to meet "full-spectrum training" needs, Casey said.

"That will allow us to rekindle some of these conventional skills they haven&#8217;t been able to train on," he added.

At Yongsan Garrison, Casey lauded training in South Korea for its focus on more traditional types of fighting. After watching an after-action review of the recent Warfighter exercise, he said it&#8217;s important soldiers maintain the skills necessary for a conventional war.

"No one else in the Army is really doing that right now," Casey said.

Right now, the Army&#8217;s 12-month tours to Iraq and Afghanistan are followed by, on average, a year back home.

Casey said there&#8217;s a new energy level at U.S. Army Japan since the activation of I Corps (Forward), which took place a year ago Friday at Zama.

"We have great capabilities here for the United States, and frankly, for Japan as well," he added.

Casey also touted improvements in quality of life for families Armywide, saying spending on programs had increased from $1.4 billion in 2007 to $1.7 billion this year.

"This is the year we deliver on the covenant," Casey said, referring to the Army Family Covenant, a collection of promises made by Army officials to improve quality of life for families and signed a year ago at garrisons worldwide.

Stars and Stripes reporter Jimmy Norris contributed to this report.