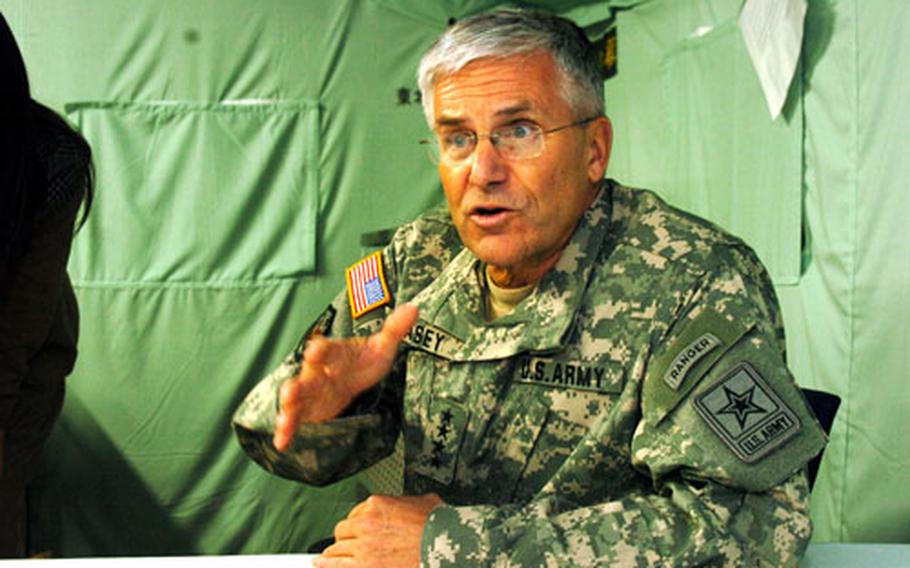 Gen. George Casey, 36th Chief of Staff of the Army, talks about the future of the Army on Saturday at Camp Sendai, Japan. Camp Sendai is Casey’s birthplace; it was the host of Yama Sakura 53, a bi-lateral training event between the Army and the Japanese Ground Self Defense Force. (Photos by Christopher B. Stoltz / S&S)

Gen. George Casey, 36th Chief of Staff of the Army, talks about the future of the Army on Saturday at Camp Sendai, Japan. Camp Sendai is Casey’s birthplace; it was the host of Yama Sakura 53, a bi-lateral training event between the Army and the Japanese Ground Self Defense Force. (Photos by Christopher B. Stoltz / S&S) 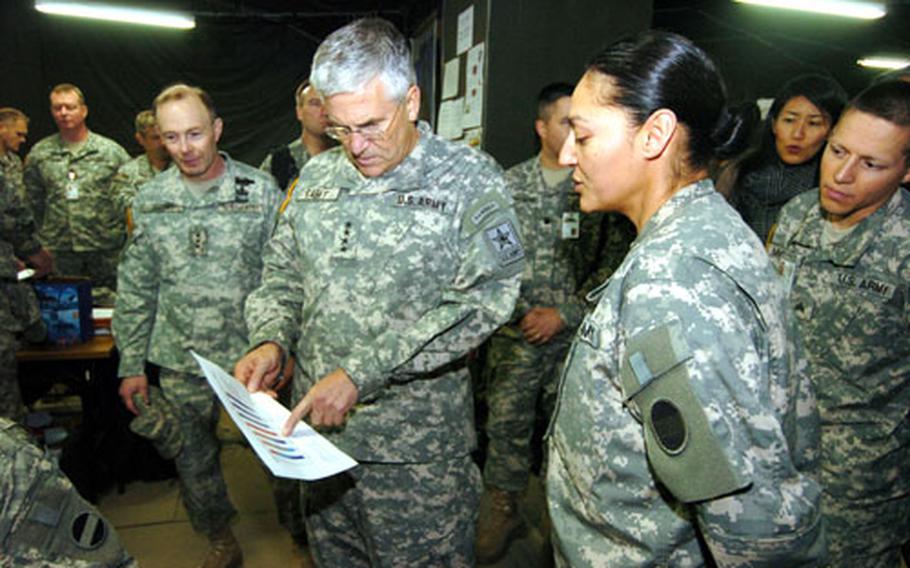 CAMP SENDAI, Japan &#8212; Stressing the need for stability and continued support from Congress and the American people, Army Chief of Staff Gen. George Casey said Saturday that the Army is not broken or hollow and is working to restore balance.

During a visit to Camp Sendai in Japan, Casey&#8217;s birthplace and the site of this year&#8217;s Yama Sakura exercise, the general sat down with Stars and Stripes to address the current state of the Army, stop loss, soldier mental health and the threat of terrorist-controlled weapons of mass destruction.

After more than six years of war, what sort of effects have you noticed on the soldiers, their families and the Army as a whole?

&#8220;I&#8217;ve been doing this job now for eight months, and in the first four or five months my wife and I traveled all over. &#8230; One of the things I did see was the cumulative effect of almost seven years of war on our soldiers, on our leaders, on our families and really on our institutions and our systems. A good example (of this) is Walter Reed, when you had five years worth of casualties coming into an arcane disability evaluation system, and it just backed up until it broke. And unfortunately, there&#8217;s a lot of those kinds of things happening all over the Army.

&#8220;We&#8217;re on a track to come down from the 20 brigades that are in Iraq by July, and that&#8217;s important because the surge sucked all the flexibility out of our system. &#8230; We&#8217;ll come off the 15-months policy for boots on the ground. I&#8217;m not sure exactly when, but we&#8217;ll be able to come off that and then we&#8217;ll gradually start building up more time at home for our soldiers. And I think that will help substantially reduce the overall stress of the repeated operations.

&#8220;The families (are) the most stressed part of the force, and so we have made great efforts here to increase what we&#8217;re doing for families. You may have read or heard about the Family Covenant that we issued to highlight the strong partnership between the leadership of the Army and Army families, and we have put our money where our mouth is. And there is $1.4 billion in this year&#8217;s budget for soldiers and families. That&#8217;s about twice what we&#8217;ve put in previously.&#8221;

You told Congress on Sept. 27, 2007, that the Army has been stretched so thin by the war in Iraq that it cannot adequately respond to another conflict, one of the strongest warnings from a military leader that repeated deployments to war zones in the Middle East have hamstrung the military&#8217;s ability to deter future aggression. Since then, what has been done to fix the problem and is the Army able to launch an attack against another aggressor?

&#8220;What has to happen is that we have to increase our size &#8212; and we&#8217;re doing that. The demand needs to stabilize, and I think that will happen here over the coming months. But it will take us three or four years to put ourselves back in balance, and it will take the continued support of Congress and the American people to ensure that we get the resources we need to do that.&#8221;

How concerned are you that terrorists will acquire and use weapons of mass destruction?

&#8220;That&#8217;s the thing that keeps me up at night. I worry about that. I know from my time in Iraq that there are terrorist organizations like al-Qaida actively seeking weapons of mass destruction, and there is no doubt in my mind that if they get one, they will use it against a developed society.

Is the Army going to phase out the &#8220;stop loss&#8221; practice of keeping soldiers beyond their enlistment, or is the goal of keeping troops in Iraq and maintaining the current troop levels more important?

&#8220;We plan to gradually phase out our reliance on stop loss. &#8230; But as I said, it will be some months before we are able to start doing that, because right now the surge has sucked all the flex out of the system.

With soldiers fighting among people and cities in Iraq and Afghanistan, is there an emphasis on cultural understanding of who and what we&#8217;re facing in the war on terror?

&#8220;Absolutely, and we have come light years with our training on the cultural side. I visited each of the combat training centers in the U.S. since I&#8217;ve been back because I wanted to see how we were doing and how well we were replicating the environments that we were sending our soldiers into.

&#8220;I was a little skeptical going into it but I was very pleasantly surprised with how well we&#8217;re doing with training in general and the improvements we&#8217;ve made on the cultural side.

&#8220;The other thing that is helping us is soldiers that are going back for the second or third time are more and more culturally aware.

&#8220;This is another good opportunity for us training here with the Japanese, and having our soldiers and our leaders understand what it&#8217;s like operating in an Asian society.&#8221;

During a hearing this past week, Congress cited that a recent CBS news investigation found that the suicide rate among veterans is twice that of civilians. It is becoming clear that some soldiers returning from Iraq and Afghanistan are struggling to deal with their wartime experiences. What is the Army doing to assess and aid soldiers&#8217; mental health before it becomes too late?

&#8220;We&#8217;ve done a couple things. First of all, in July we instituted a chain-teaching program on post-traumatic stress disorder and traumatic brain injury. That meant every soldier would be taught about it by his chain of command. &#8230; The purpose of that was two-fold. One was to educate the soldier and the leaders about it, and the fact of the matter is if you diagnose it and get treatment it is very recoverable, except for some of the more severe cases. The second is to reduce the stigma, and we treat post-traumatic stress and traumatic brain injuries as injuries, because that&#8217;s what they are. We have to reduce the stigma so that people can get the treatment and so they can recover fully.

&#8220;The other thing we&#8217;re doing is that earlier last year we instituted a post deployment health re-assessment. We were doing assessments about 90 days after they got back. But what we were finding was that some of the symptoms of post-traumatic stress didn&#8217;t exhibit themselves until about six months after they got back. So we are doing a re-assessment and that is helping us identify more. I think since Sept. 11, 2001, we&#8217;ve had more than 12,000 soldiers identified and treated for post-traumatic stress or traumatic brain injury.&#8221;

You were born here in Sendai &#8212; how has the experience been coming back to Japan?