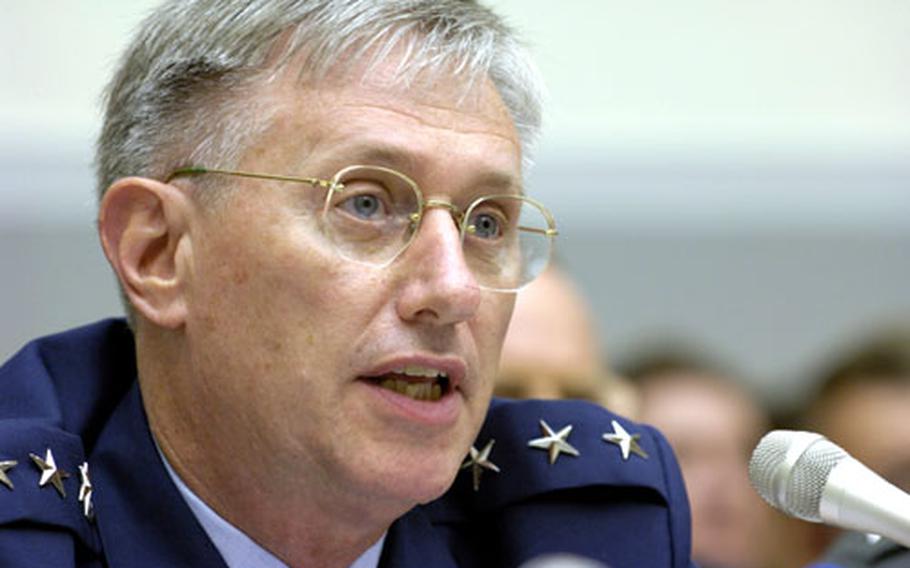 President Bush has nominated Lt. Gen. Roger A. Brady to become the next U.S. Air Forces in Europe commander.

If approved by the Senate, Brady, who currently serves as deputy chief of staff for personnel at Air Force headquarters at the Pentagon, also would be promoted to general.

&#8220;The men and women who partner with NATO, (U.S. European Command), and all our friends in Europe have added to a great legacy of service under Gen. Tom Hobbins. Once confirmed, it will be a great privilege to join that team,&#8221; Brady wrote in a statement e-mailed Friday to Stars and Stripes.

The announcement &#8212; made by the Department of Defense late Thursday &#8212; comes as Hobbins prepares to retire after 38 years in the Air Force, the last two of which he spent in his current position at Ramstein Air Base, Germany.

Hobbins, who also had a two-year stint at Ramstein starting in 1998 as the director of aerospace operations for USAFE headquarters, officially will relinquish his position Dec. 10.

It is still unclear when Brady will take over.

&#8220;USAFE always has had a reputation for being an outstanding and challenging command ... It has been a privilege to serve with the most experienced, respected and combat-ready forces in the world,&#8221; Hobbins wrote in a statement e-mailed to Stars and Stripes by a public affairs officer.

A command pilot, Hobbins has more than 5,000 flying hours, primarily in fighter aircraft and was named instructor pilot of the year in 1976 while stationed at Craig Air Force Base, Ala.

As leader of USAFE, he has considered building relationships key to the command&#8217;s success, according to his statement.

Establishing enduring security relationships with foreign nations &#8220;not only helps them from a military standpoint&#8221; but also fosters &#8220;conditions that deter terrorism,&#8221; Hobbins wrote.

On Saturday, he will be inducted into the Order of the Sword &#8212; the highest honor the Air Force enlisted corps can bestow upon an individual.

It will be presented at a formal ceremony by the command&#8217;s chief master sergeants.