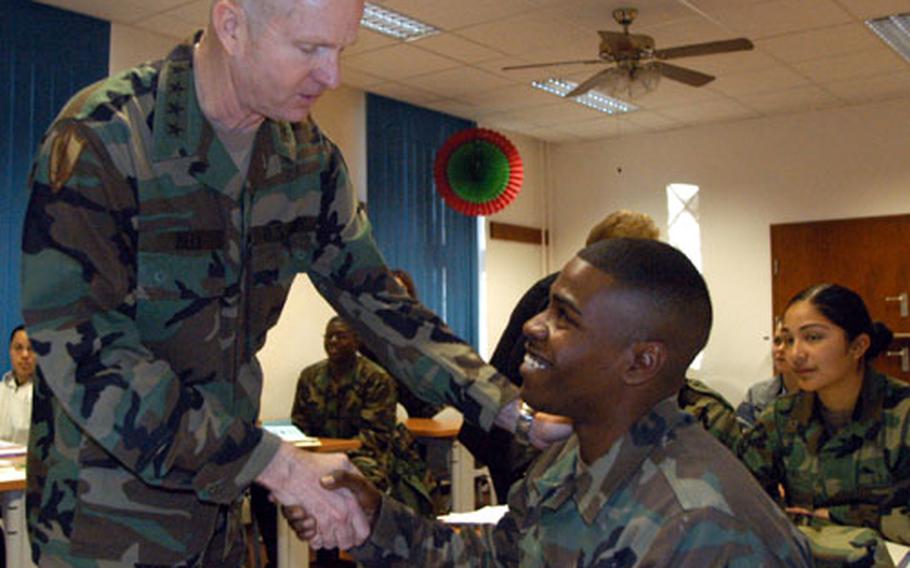 MANNHEIM, Germany &#8212; When Gen. B.B. Bell visits a military community, troops snap to attention as his entourage passes and a flurry of activity surrounds his movements.

But there is also a lot of humor, handshakes and even hugs.

Over the past 11 months, Bell and his informal team, which includes Russell Hall, director of the Installation Management Agency Europe Region, have visited 17 communities in Europe. Their goal is to visit two to three each month.

Last year, shortly after the 1st Armored Division deployed, Bell made his first community visit, a standard affair in which rear detachment officers paraded him through motor pools and barracks.

Since then, he&#8217;s made sure the daylong community tours focus on family support, such as child-care centers, youth services and medical clinics.

At times, Katie Bell would jokingly correct her husband, fix his hair or interrupt if she saw something of interest.

Her friendliness softened the military visit, allowing the people they met to open up. At one point, she hugged the wives of deployed soldiers. About one-quarter of the troops assigned to Mannheim are currently in Southwest Asia.

During a closed-door meeting with rear detachment commanders, Bell spoke bluntly on a list of topics, such as the importance of caring for new soldiers, the rest and recuperation program and the reintegration of soldiers returning from Iraq.

Troops returning home will work a mandatory week of half-days to reintegrate, followed by up to a month of vacation time, Bell said. During the first 45 days, leaders must work on healing soldiers&#8217; spirits, rather than fixing equipment, he said.

At lunch, Bell spoke with family readiness group leaders at the Top Hat Club, and offered military spouses a chance to ask him questions.

But it was Gravens who stole the show with a heartfelt message to the soldiers&#8217; wives.