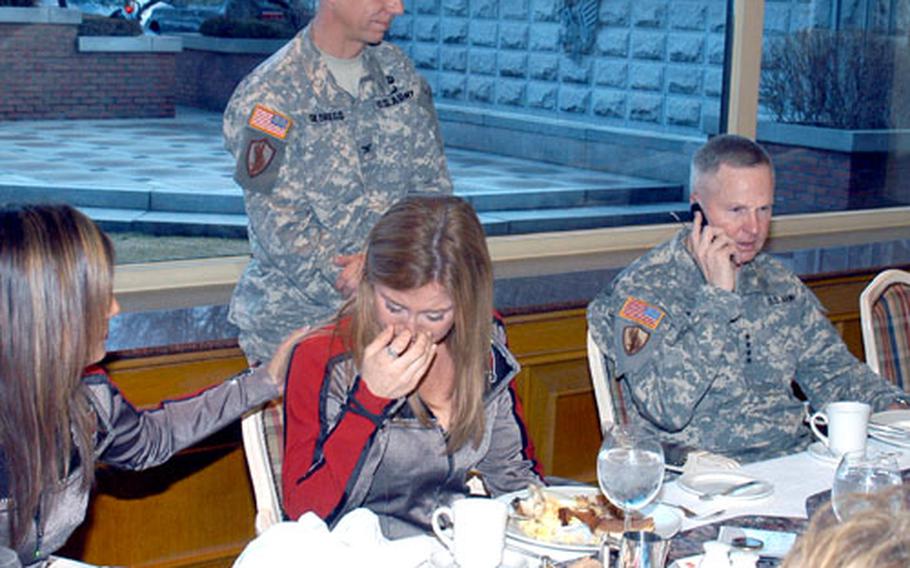 YONGSAN GARRISON, South Korea &#8212; What began as a simple ceremony to thank a group of visiting cheerleaders turned into an emotional event early Wednesday morning at the Dragon Hill Lodge.

When U.S. Forces Korea commander Gen. B.B. Bell learned that one of the Tampa Bay Buccaneers cheerleaders visiting South Korea had a brother who was wounded in Iraq, he grabbed his cell phone and called the soldier at Fort Carson, Colo.

While Bell spoke to Sgt. Cole Gainey, his sister, Aubrey and many other cheerleaders began crying.

&#8220;Those in the military, particularly those who serve in combat and those who are wounded in combat are the greatest contributors to their country,&#8221; Bell told the brother according Army officials. &#8220;I&#8217;m very proud and thank you for your service.&#8221;

The NFL cheerleaders have been in South Korea since Saturday giving a series of performances and appearances as part of the Morale Welfare and Recreation program.

The cheerleaders finished their trip to South Korea with an autograph session and performance at Suwon Air Base. They were scheduled to return to the United States on Thursday.