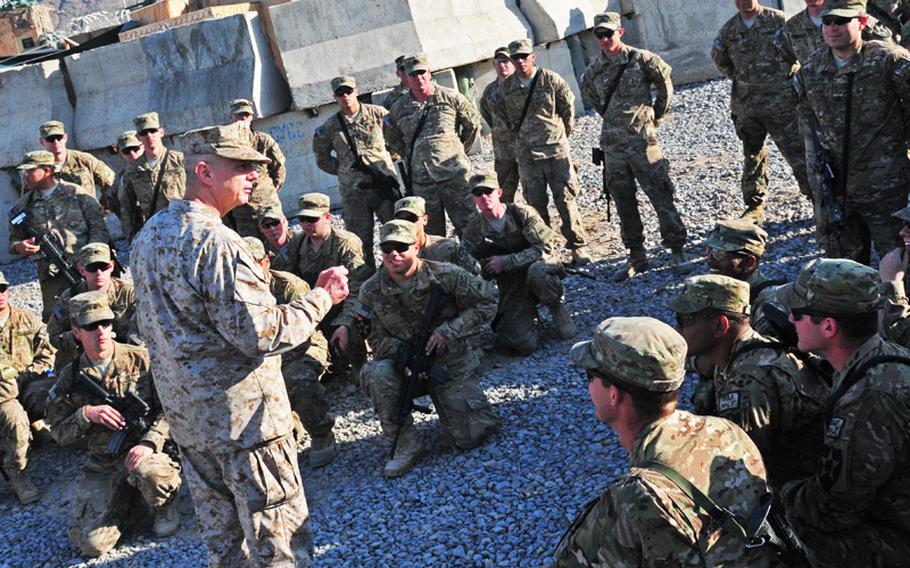 WASHINGTON &mdash; The top American commander in Afghanistan has submitted military options to the Pentagon that would keep 6,000 to 20,000 U.S. troops in the country after 2014, The New York Times reported Wednesday.

A senior military official told the Times that Gen. John Allen offered Defense Secretary Leon Panetta three plans with troop levels of 6,000, 10,000 and 20,000. Each included a probable risk factor &mdash; the lower the number of troops, the higher the likely risk factor, the Times cited an unnamed official as saying.

The official, who the Times said spoke on the condition of anonymity because he was not authorized to discuss the options, stressed that a more important factor in the success of any post-2014 American mission was how well an Afghan government known for corruption could deliver basic services to the population.

The options provide the president different levels of U.S. military power to counter expansion of terrorist groups and advise the Afghan military, which has limited air power, logistics or ability to evacuate and treat its wounded, the Times noted.

With 6,000 troops, officials told the Times, the mission would largely be Special Operations commandos hunting down insurgents. There would be limited logistical support and training for Afghan forces. With 10,000 troops, the United States would expand training; with 20,000 troops, the Obama administration would add some conventional Army forces to patrol in limited areas.

It was unclear whether President Obama had studied the options, the Times reported officials as saying, although they added he was expected to discuss them at the White House next week when Afghan President Hamid Karzai visits.

The NATO combat mission is set to end Dec. 31, 2014, when the Afghan Army and the police are to have full responsibility for their country&rsquo;s security. But, the Times noted, the Obama administration has been debating the size and mission of a residual American force.

The help is sorely needed. According to a recent assessment that covers April through September 2012, the Pentagon found that just one of the Afghan Army&rsquo;s 23 brigades could operate without air or other military support from the United States or its NATO partners.

The Times reports that defense officials are saying that Allen&rsquo;s recommendations did not include options for the pace of withdrawals of the remaining 66,000 troops in Afghanistan, although American officials say he wants to keep a large majority &mdash; perhaps as many as 60,000 &mdash; through the end of the fighting season next fall; military officials anticipate that the White House will seek a more rapid withdrawal.

Allen&rsquo;s recommendations come as he and Panetta are soon due to leave their jobs. Allen is to be replaced in February by Gen. Joseph F. Dunford Jr., and Panetta is expected to step down after Obama nominates a successor. Panetta&rsquo;s successor is less clear; former Republican Sen. Chuck Hagel&rsquo;s name has been the most prominent, though other Pentagon officials&rsquo; names have also circulated.

Allen, who is under investigation for a series of e-mails he exchanged with a socialite in Tampa, Fla., Jill Kelley, is to become the NATO supreme allied commander in Europe, but his nomination is delayed as the investigation continues.

Pentagon officials told the Times on Wednesday that he had long planned to leave Afghanistan in February, and that the inquiry had not accelerated his departure.