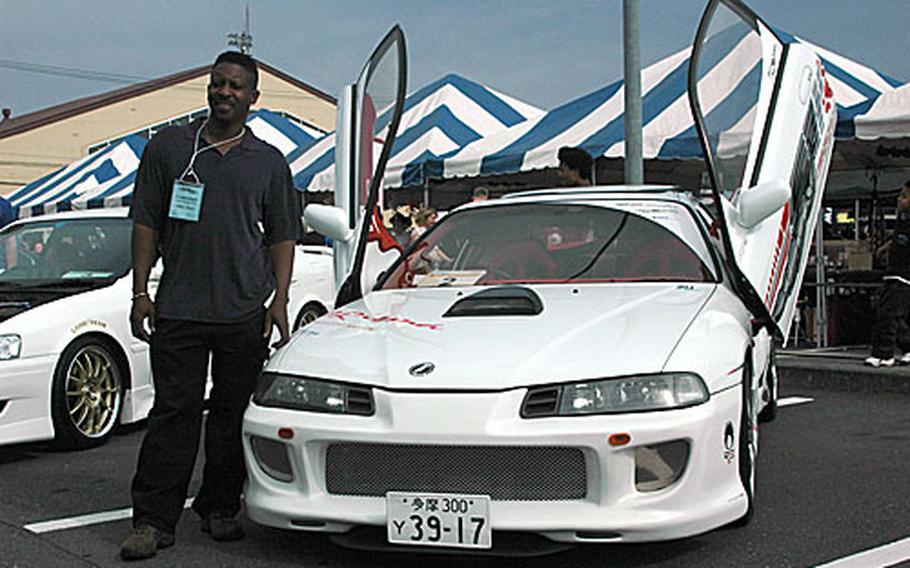 YOKOTA AIR BASE, Japan &#8212; On the far side on the Yokota Auto Hobby Car Show, past the live bands, past the professional racing cars and motorcycles, and even past the arts and crafts show taking place at the same time, was a small parking lot where the true gear heads were.

It was in this lot where nine competitors from Yokota and one from Camp Zama proudly displayed their custom-tuned cars Sunday, the representation of years of hard work and thousands of dollars spent.

Although this competition was billed as one for the private, i.e. amateur, tuner, it was clear that each car had been carefully worked on by someone with years of experience.

Walking along the row of cars, one gets a feel for just how much work has gone into each machine.

Senior Airman Scott Thomas&#8217;s 1992 Nissan Cefiro looks nothing like the car that he started with. Sporting a black-with-red-fleck paint job, a custom body kit and polished rims, the car has been transformed.

Thomas also had on display photos of how the car, originally marketed to the Japanese business commuter, had looked throughout the tuning process.

Thomas, who said he was grateful for the help of his friends, said that during the 5&#189; months that he worked on the car during whatever free time he had, his goal was to make it appeal to both American and Japanese car enthusiasts.

But while having a car that just looks nice is fine for some people, it wasn&#8217;t good enough for this group. Beneath each of the painted and polished hoods were finely tuned and carefully modified high performance engines.

Two other GTR owners in the competition who race their cars on tracks in Japan, Staff Sgt. Josh Sistar and Paul Castillo, explained that adding horsepower and tweaking the engine to maximize performance really pays off when they are head-to-head on the track.

Until then, Sistar can be happy knowing that his efforts won&#8217;t go unnoticed, winning the top spot in Sunday&#8217;s show.