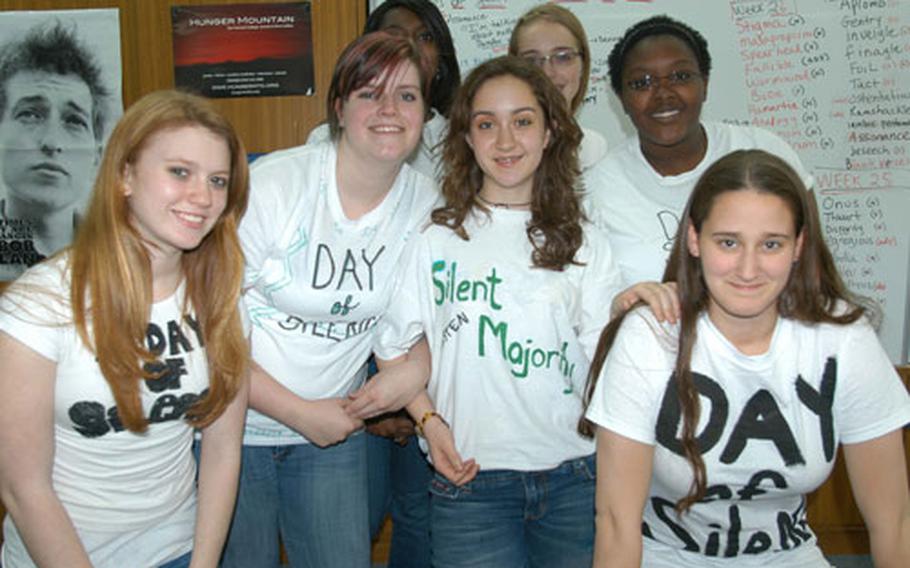 About 30 students participated in “National Day of Silence” Friday at Robert D. Edgren High School at Misawa Air Base, Japan. Though the event was spearheaded by the school’s Gay-Straight Alliance, many students showing their support for tolerance were not part of the club. Pictured, left to right, are Kari Barnes, Amanda Meyer, Morgan Hines, Sarah Zediker, Morgan Potter, Jasmyne Channel and Heather Steele. (Jennifer H. Svan / S&S)

MISAWA AIR BASE, Japan &#8212; In four short months, the Gay-Straight Alliance at Robert D. Edgren High School has made a name for itself &#8212; despite its name.

After riding out controversy that swirled around the club&#8217;s formation, GSA members have devoted the second half of the school year to raising money and awareness for various causes.

A spring bake sale next to the commissary raised $700 in three hours for educational programs that promote tolerance in middle schools.

In March the club helped sponsor &#8220;V-Day,&#8221; a theatrical performance to raise community awareness of violence against women and children. That event raised $160 for the national V-Day organization.

Most recently, GSA spearheaded Edgren&#8217;s participation in Friday&#8217;s &#8220;National Day of Silence,&#8221; a movement started at the University of Virginia in 1996 to prevent bullying in schools. This year the event was dedicated to Lawrence King, a California middle school student who was shot and killed in February, allegedly because he was gay.

At Edgren the event drew participation beyond the GSA circle, with about 30 students wearing T-shirts and toting white boards or pen and pad to communicate in classrooms and hallways.

&#8220;Ethnic, religious, sexual differences is no reason to single someone out and treat them differently,&#8221; Heather Steele, a senior and National Honors Society member, jotted in a notebook.

GSA members Samantha Cannon and Stephanie Wehrung, both seniors, say the second half of the school year has gone smoother than anticipated. After wrangling for their club&#8217;s survival until December, they didn&#8217;t expect the hullabaloo to go away.

No one has openly protested against the group, but some have cast their disapproval other ways.

While GSA students sold brownies and cake, an adult approached the bake sale table and asked &#8220;is this legal?&#8221; Wehrung said.

Another time, Kuntz received an anonymous complaint about her e-mailing a V-Day announcement to all three Department of Defense Dependents Schools on Misawa. The individual took umbrage with Kuntz and her writing in the announcement that DODDS teachers, among other groups, had collaborated on the event.

&#8220;We had representatives from every single school (participate in V-Day), but somebody felt offended to be affiliated with GSA,&#8221; she said.

But many teachers, according to Kuntz, have rallied behind GSA. &#8220;We have had an incredible amount of support,&#8221; she said.

Teresa Giustino, the school psychologist at Edgren and Cummings Elementary School, is a backer.

The club &#8220;has allowed students to take on leadership roles in their advocating for social awareness since this forum is essentially student led,&#8221; she wrote in an e-mail to Stars and Stripes. &#8220;The GSA is not about sexual orientation, it&#8217;s about showing compassion and having the courage to do so. It&#8217;s about promoting human dignity.&#8221;

Despite the club&#8217;s success, a stigma still persists because of GSA&#8217;s name, say Kuntz and students, one that&#8217;s especially hard to shake in a conservative military community.

The club has 12 members, a good number for a small school, Kuntz said. But one student dropped out, fearing club affiliation might hurt a parent&#8217;s career.

Steele asked that if her name was used in this story that it be made clear she wasn&#8217;t a GSA member. She said she was worried about losing babysitting jobs.