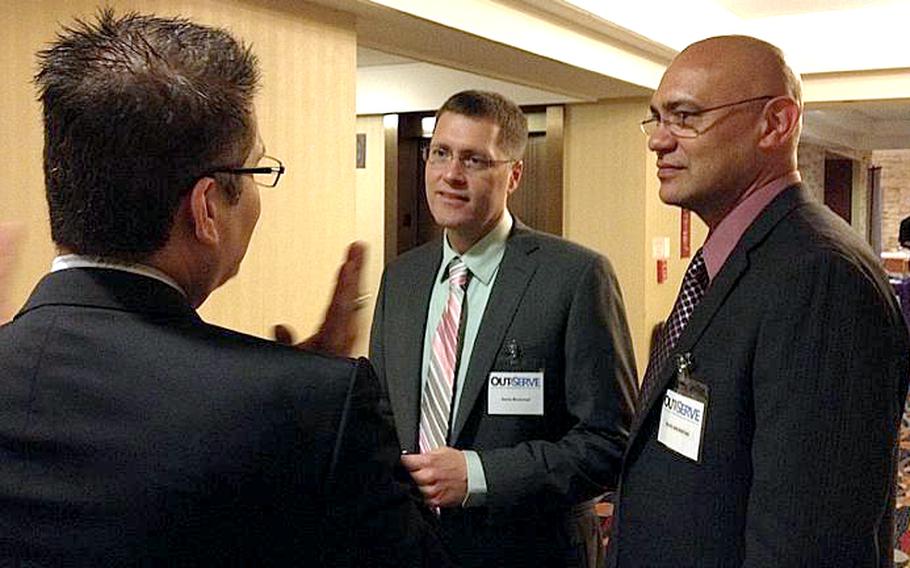 WASHINGTON &mdash; When Master Sgt. David Brunstad told commanders about his husband, he worried that their reaction would be either anti-gay or overly politically correct and cautious.

Instead, he said, the first thing his commander said was: &ldquo;It&rsquo;s a shame that you two won&rsquo;t be able to get any military benefits.&rdquo;

Since last September when the repeal of &ldquo;don&rsquo;t ask, don&rsquo;t tell&rdquo; allowed gay troops to serve openly for the first time in U.S. history, rights advocates have shifted their work toward what they see as complete equality for those troops and their families.

Currently, they are not eligible for the same medical coverage, housing stipends and other military benefits available to straight married couples.

On Monday, the active-duty gay rights advocacy group OutServe launched a two-day conference focused on those family issues. The goal, organizers said, is to highlight the inequalities gay troops still face and push for changes, either through Congress or the courts.

For Brunstad, a 17-year Air National Guardsman, the repeal of &ldquo;don&rsquo;t ask, don&rsquo;t tell&rdquo; meant relief that a slip-up wouldn&rsquo;t cost him his job. But he and his husband, Darin, still face a host of headaches navigating the military system.

Darin can receive life insurance payouts but not education or medical benefits, and still has trouble accessing military family support programs. If David were to be killed on duty, Darin couldn&rsquo;t take possession of his remains, even the two have been together for 19 years and were married in New Hampshire six months ago.

&ldquo;To me, it&rsquo;s also a dignity thing,&rdquo; David said. &ldquo;When I have to fill out any forms or paperwork, I have to check off that box that says I&rsquo;m single. But I&rsquo;m legally married.&rdquo;

Defense Secretary Leon Panetta has pinned that on the federal Defense of Marriage Act, which prohibits the federal government from recognizing same-sex marriages and awarding any benefits to those couples.

Last week, conservative House lawmakers worked to strengthen that law, even as President Barack Obama publicly stated for the first time that he supported legalizing gay marriage across the country.

Rights groups are hoping to dismantle DOMA, or at least find ways to work around it in the immediate future. Several pending court cases seek to overturn the law, and bills pending in the House and Senate would also undo the same-sex marriage exclusion.

But officials admit those moves will likely take years to develop. In the interim, they&rsquo;re pushing for gay military families to share their stories and help sway public opinion in their favor.

&ldquo;A lot of people just aren&rsquo;t aware that servicemembers and veterans aren&rsquo;t getting the recognition they&rsquo;re due because of this law,&rdquo; said Adam Bink, director of online programs for the Courage Campaign. &ldquo;We need to be highlighting this law as nothing more than a measure that takes away [troops&rsquo;] rights.&rdquo;

Aubrey Sarvis, executive director of the Servicemembers Legal Defense Network, said officials there hear complaints from commanders and fellow servicemembers about the inequitable benefits and inconsistent policies for same-sex couples. That kind of public pressure, he said, shows the issue affects all of the military, not just one small subset.

Conference attendees were scheduled to spend most of Tuesday lobbying lawmakers to repeal of the Defense of Marriage Act and to pressure the Pentagon for ways to provide more assistance to same-sex military couples.