Gators and Hooters in the mountains of Afghanistan 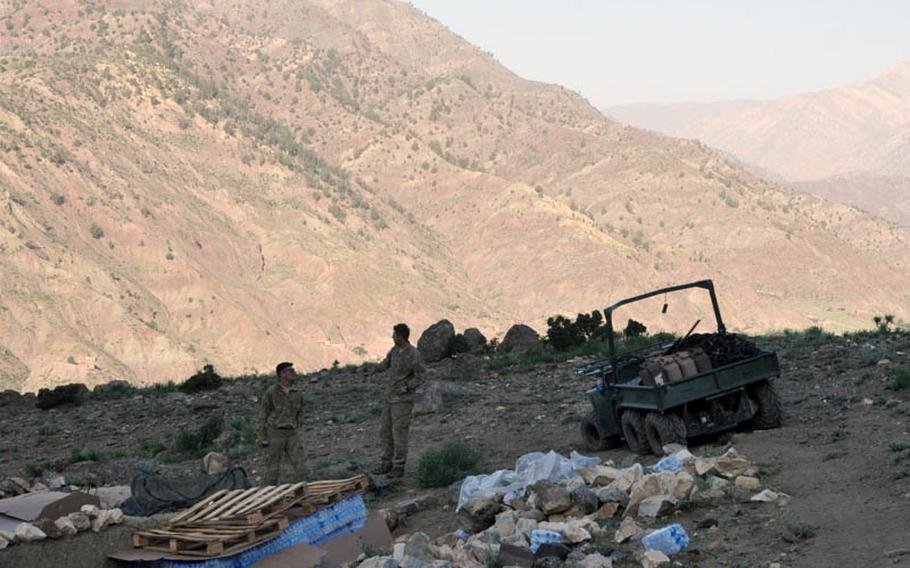 Buy Photo
First Lt. Roderic O'Connor, left, and Sgt. Aaron Welch stand near a Gator that would cause its share of problems during their platoon's mission to the Azra district of Logar province in mid-June. (Martin Kuz/Stars and Stripes)

Buy Photo
First Lt. Roderic O'Connor, left, and Sgt. Aaron Welch stand near a Gator that would cause its share of problems during their platoon's mission to the Azra district of Logar province in mid-June. (Martin Kuz/Stars and Stripes) 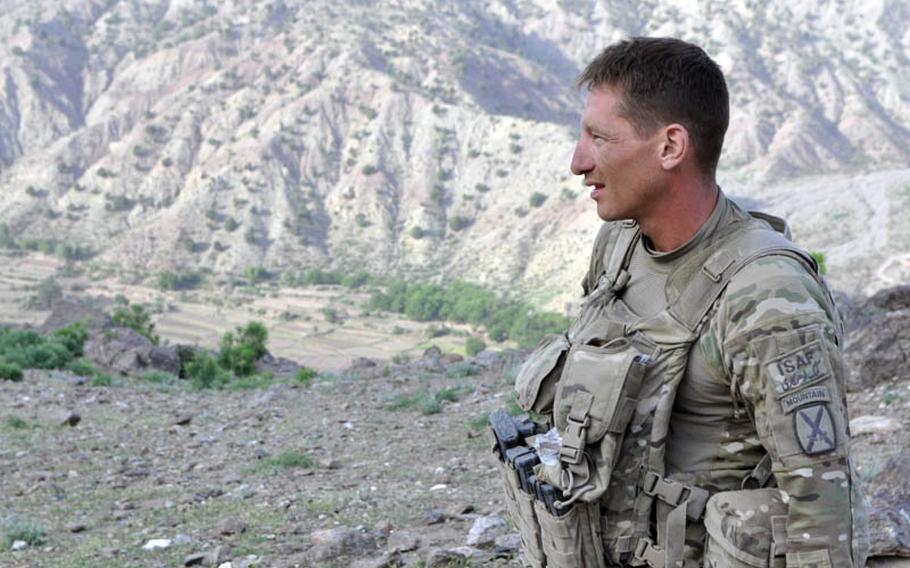 Buy Photo
Sgt. Frank Cuchina is shown during a mid-June mission in the Azra district of Logar province, far from the Hooters restaurant he used to manage in Melbourne, Fla. (Martin Kuz/Stars and Stripes) 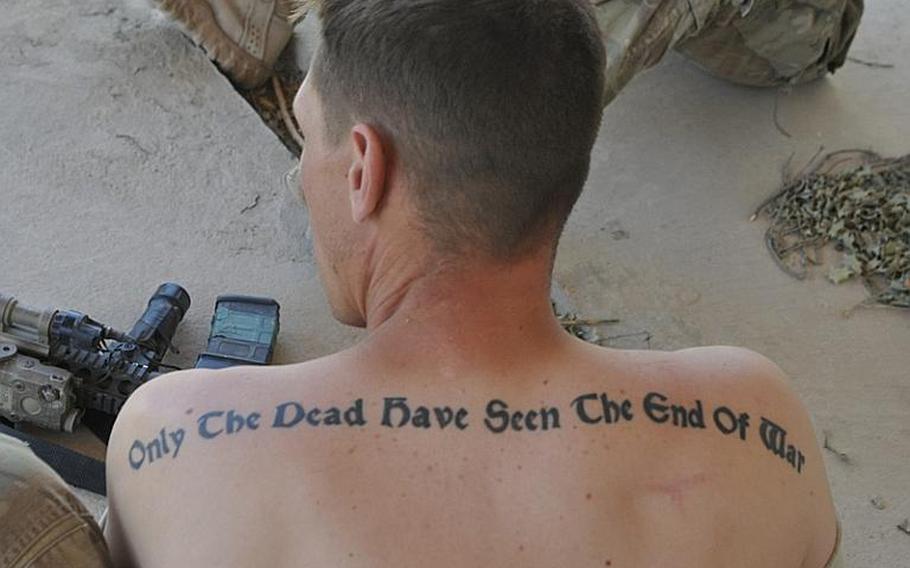 Buy Photo
During down time on a mid-June mission in the Azra district of Logar province, Sgt. Frank Cuchina showed off the quote he has tattooed across his shoulders. (Martin Kuz/Stars and Stripes)

KUZA CHAWATRA, Afghanistan &mdash; The Gator trouble began even before its six knobby tires hit the ground on a mid-June morning in this mountain valley village 15 miles west of the Pakistan border.

The all-purpose vehicle and about two dozen soldiers had arrived by Chinook in the Azra district of eastern Logar province, an area considered Taliban country. But as Sgt. Aaron Welch tried to drive down the helicopter&rsquo;s rear ramp, the Gator&rsquo;s roll bar snagged on the ceiling.

I saw Welch&rsquo;s lips move, and though the Chinook&rsquo;s rumble made it impossible to know what he said, I&rsquo;m almost certain it wasn&rsquo;t something you&rsquo;d hear on &ldquo;Barney and Friends.&rdquo;

After a bit of maneuvering, Welch, of Coeur d&rsquo;Alene, Idaho, extricated the Gator, only to confront another problem.

The helicopter had deposited the soldiers in a farm field ringed by a stone retaining wall. The field stands four or five feet above the land bordering it, a drop he feared might cause the Gator to flip.

Exasperated, he told other soldiers with his platoon, part of the Headquarters and Headquarters Company of the 10th Mountain Division&rsquo;s 4th Brigade Combat Team, to raze one corner of the wall.

As they worked, Welch tried to find humor in the dilemma. To no one in particular, he declared, &ldquo;We come in peace ... and to destroy your field.&rdquo;

The soldiers did their best to rebuild the wall after Welch steered the Gator down the improvised dirt ramp. But the owner of the property was unhappy with their handiwork.

&ldquo;You ruined my field and my wall,&rdquo; he said through an interpreter to a group of soldiers who spoke with him later in the morning. When one attempted to apologize, the man waved his hand as if swatting a fly and walked away while muttering in Pashtun.

I&rsquo;m almost certain it wasn&rsquo;t something you&rsquo;d hear on &ldquo;Barney and Friends.&rdquo;

Reaching the landing zone where helicopters would pick them up required troops to wade across a fast-flowing stream about 12 feet wide. Despite what the name might suggest about its nautical prowess, the Gator made it only two-thirds of the way.

With Welch at the wheel, the vehicle bottomed out in five feet of water, killing the engine within seconds. After unloading several ammunition boxes from its payload, a few soldiers debated what to do with the disabled vehicle.

Welch favored blowing it up to prevent insurgents from salvaging its parts. But someone pointed out the explosion might divert the stream into nearby fields and cause flooding. Then Welch received word over his radio from a higher-up to abandon the vehicle. End of discussion.

Sgt. Frank Cuchina, a member of Welch&rsquo;s platoon, didn&rsquo;t follow the usual enlist-after-high-school path into the Army. He joined in 2006 after a decade of managing a Hooters restaurant in Melbourne, Fla., where he lives.

The decision to forsake what many (male) soldiers would consider a dream job wasn&rsquo;t difficult for the 35-year-old Cuchina.

&ldquo;It got old,&rdquo; he said. &ldquo;Chicken wings, girls with &mdash;&rdquo; Here he spoke of what I&rsquo;ll call ample physical attributes.

Tattooed across his shoulders is a quote often attributed to Plato: &ldquo;Only the dead have seen the end of war.&rdquo; He jokingly refers to it as &ldquo;my PTSD tattoo.&rdquo;

&ldquo;Being a Hooters manager is sort of like being the mayor. You&rsquo;re popular. I got to see a couple Super Bowls, the Daytona 500,&rdquo; said Cuchina, who previously deployed to Iraq and has survived four IED explosions. &ldquo;But being in Afghanistan &mdash; there&rsquo;s nothing quite like it.&rdquo;

As for the temptations offered by the shapely staff where he once worked, Cuchina offered a perspective that comes with age: &ldquo;Put it this way &mdash; I married a Hooters waitress. Probably explains why I&rsquo;m divorced.&rdquo;