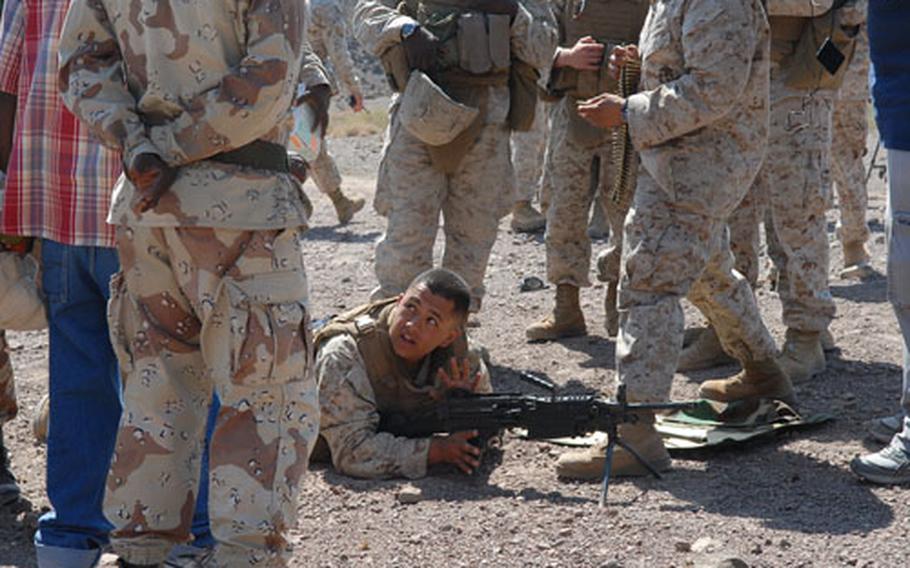 Lance Cpl. David Jaime, 21, of Santa Maria, Calif., demonstrates to the gathered members of the Djiboutian air force how to use a squad automatic weapon at a joint exercise on Dec. 2 near Arta, Djibouti. (Zeke Minaya / S&S)

Lance Cpl. David Jaime, 21, of Santa Maria, Calif., demonstrates to the gathered members of the Djiboutian air force how to use a squad automatic weapon at a joint exercise on Dec. 2 near Arta, Djibouti. (Zeke Minaya / S&S) 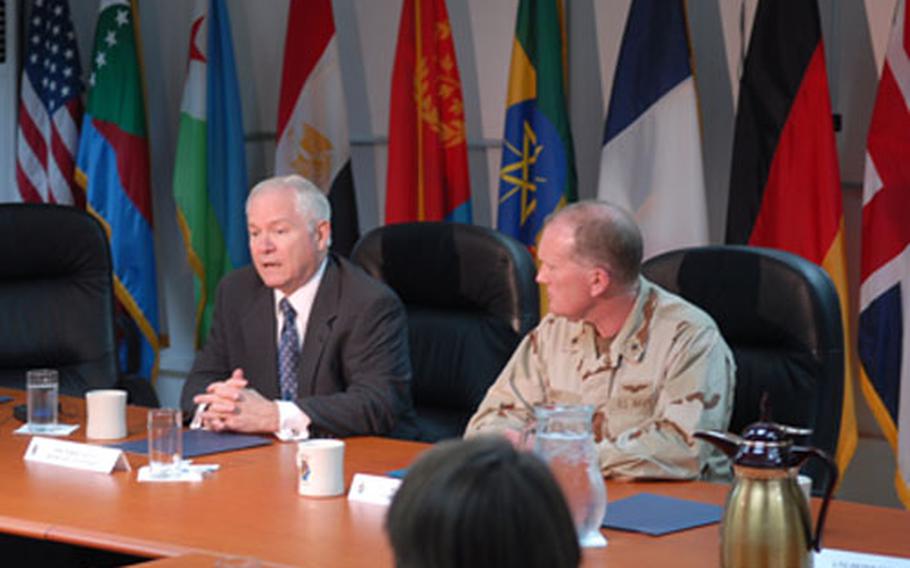 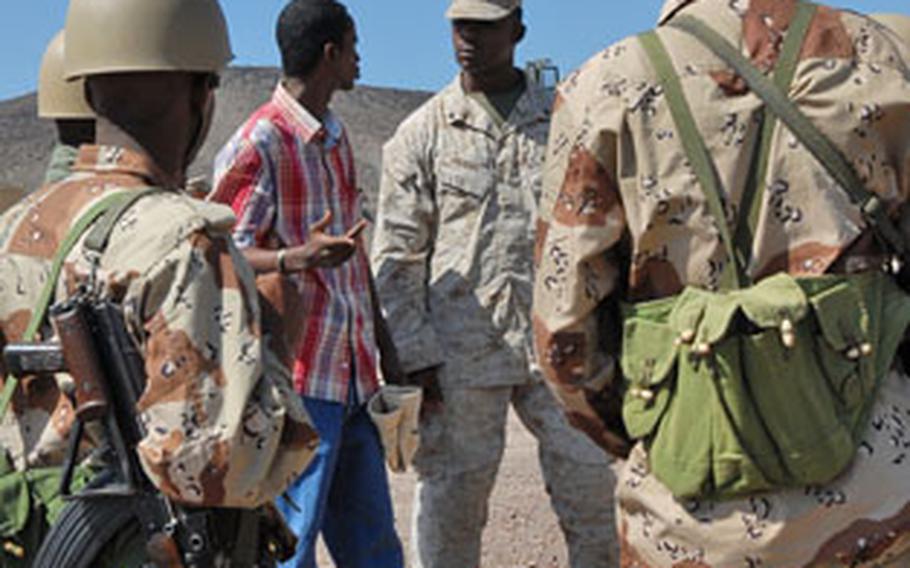 CAMP LEMONIER, Djibouti — Defense Secretary Robert M. Gates visited this small but key nation Monday to promote the U.S. military mission in the Horn of Africa, which hopes to deny anti-American extremism from gaining a foothold. The mission aims to encourage economic development and build closer ties to local leaders and communities.

Gates’ meeting with Djiboutian leaders was closed to the media and afterward he took only a few questions from reporters. He said that the efforts of Combined Joint Task Force-Horn of Africa would provide a model for the newly established Africa command.

“I think it’s a good model for AFRICOM, and also a mix of activities that I think we should be doing more as a way of preventing problems from developing,” Gates said.

AFRICOM was launched on Oct. 1 and is slated to be fully operational by 2008. The new command is presently headquartered in Germany while it searches for a permanent home in Africa.

After leaving Djibouti, Gates made his third trip to Afghanistan since becoming the Pentagon chief a year ago. He was planning to hold talks on Tuesday with Afghanistan’s President Hamid Karzai at a time when his government has complained about U.S. and NATO strikes that have killed civilians.

The Horn of Africa Task Force approach to combating terrorism is the use of “soft power,” advocated by Gates in a speech last week at Kansas State University. According to media reports, he said the counterterrorism fight needed to evolve “beyond the guns and steel of the military” to include more diplomacy and economic development.

This kind of preventative counterterrorism is a mission the force has undertaken by building schools and drilling wells, conducting joint training exercises with local militaries, and providing health care and supplies.

The heightened U.S. outreach in heavily Islamic African countries also comes at a time when some say the American image in the Muslim world has been badly bruised by protracted conflicts in Iraq and Afghanistan. Some experts also see China and its sprouting economy as a major economic rival to American foreign investment interests in the region.

U.S. military leaders in Djibouti say the Horn of Africa Task Force is not concerned with China or any other anterior motives and is focused on fighting extremist doctrines — most notably radical Islam — before they take root.

“The Horn of Africa is ripe for exploitation by terrorists; within its vast regions of under-governed areas there is a free flow of the instruments of war,” according to a U.S. media presentation given to visitors at Camp Lemonier. The members of the task force counter these conditions by “waging peace,” according to the presentation. Over its 13-nation area of responsibility, CJTF-HOA has conducted several humanitarian missions, including the drilling of 20 wells, flood relief in Ethiopia and recovery efforts in Kenya.

In an isolated patch of arid Djiboutian countryside Sunday, U.S. Marines were applying the Task Force mission as they gathered at a makeshift gun range to keep their marksman skills sharp.

The Marines of the 3rd Low Altitude Air Defense Battalion were joined by a handful of members of the Djiboutian air force.

“Americans are very open, very open-minded, if you ask any question they will try and help you,” he said.

The U.S. military hopes such interactions will yield benefits for both sides. The Horn of Africa Task Force was formed in late 2002 and has been based since May 2003 in Djibouti, at Camp Lemonier, a former French Foreign Legion barracks. The impoverished nation of Djibouti, roughly the size of the state of Massachusetts with a population that hovers around half a million, offers American forces a strategically central location, near Yemen and critical shipping lanes in the Red Sea and Gulf of Aden.

Currently there are about 2,000 personnel attached to the Task Force-Horn of Africa.

Second Lt. Sung Park, of Virginia, said he did not know much about Djibouti before arriving a few months ago with the rest of the 3rd LAAD. “I had to look it up,” he said. But he makes it a point to remind his Marines of the importance of their mission.

“We remind our Marines of the big picture. We remind them that they are making a difference.”