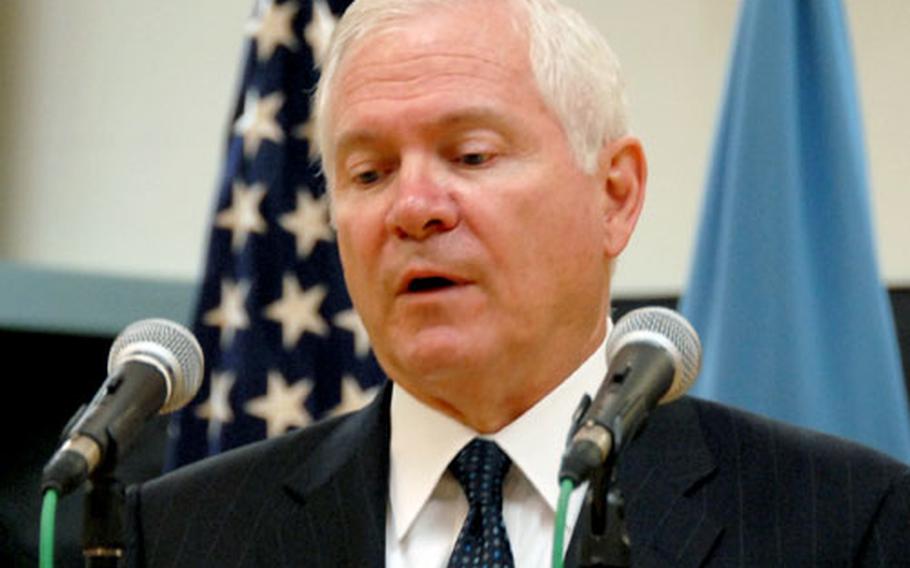 SEOUL &#8212; U.S. Secretary of Defense Robert Gates said Tuesday that the United States will maintain its current level of troops in South Korea, despite speculation that an Apache helicopter battalion based there might be deployed to the Middle East.

He said no decision has been made, nor will one be made soon, about sending the Apaches.

Any change in U.S. troop strength on the peninsula will be made after fully consulting with South Korean defense officials, though there will be fluctuations in personnel and units as the 8th Army transforms, he said.

"We will keep our commitments made at Camp David and we will ensure that we maintain at least the same capabilities that we have here and perhaps be able to enhance them," he said.

Gates said he met earlier Tuesday with South Korean Defense Minister Lang Sang-hee and talked about a broad range of issues, including South Korea&#8217;s international peacekeeping efforts in Lebanon and other countries.

Gates said the meeting was "comprehensive and very friendly," adding that he told Lee that he supports extending tours in South Korea from one to three years and letting servicemembers bring their families.

"I told the minister I was in full support of this, but because it would require additional facilities, we would need to look at this as a long-term plan," he said.

Bell, a vocal supporter of normalizing tours, said last weekend that he envisions the normalization of tours taking place within 15 years.

Gates said he wasn&#8217;t aware of North Korea helping countries with nuclear development capabilities, after the discovery of a nuclear project between North Korea and Syria.

"I think we are dealing with the consequences of the proliferation effort that we saw with Syria in those six-party talks, and I think that&#8217;s the appropriate venue," he said.