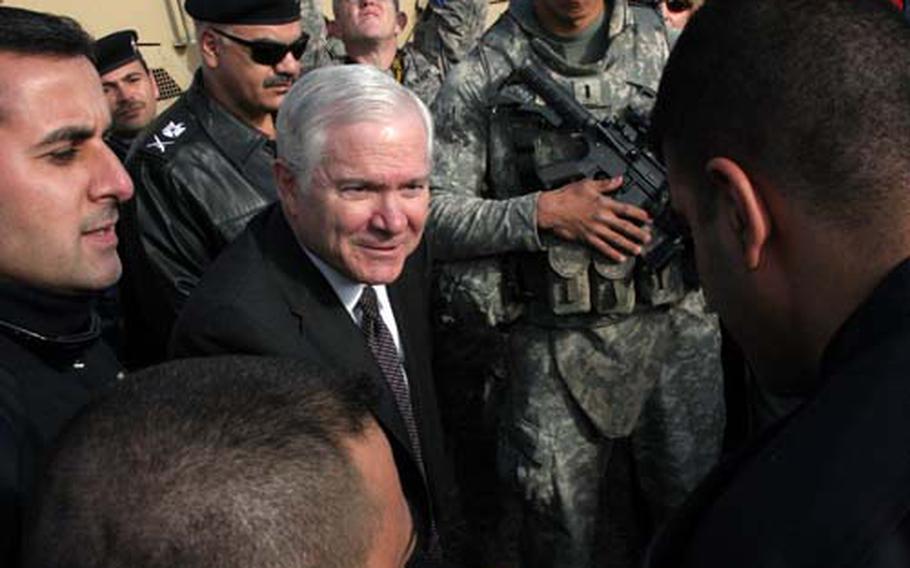 &#8220;I wouldn&#8217;t be a bit surprised to see agreements between ourselves and the Iraqis that continues a train, equip and advise role that continues beyond the end of 2011,&#8221; Gates said, speaking to soldiers and airmen gathered at Forward Operating Base Warrior. &#8220;They realize that they&#8217;re probably not going to be ready.&#8221;

Before Gates&#8217; July visit to Baghdad, Iraqi officials had expressed interest in obtaining F-16s. But U.S. officials said at the time they were still discussing which aircraft would be most appropriate for the Iraqi force, depending on its ability to pilot and maintain the vehicles.

In Afghanistan earlier this week, Gates had similar conversation regarding helicopter assets. Gates said that U.S. trainers of the Afghan National Army Air Force in Kabul told him: &#8220;You can&#8217;t teach somebody to maintain or fly a helicopter in six months or 12 months.

&#8220;And I think in both countries, that kind of a role is very likely to continue beyond the end of our combat operations.&#8221;

On Friday, the fifth day of his overseas trip, Gates also met with Iraq Prime Minister Nouri al-Maliki in Baghdad and briefly stopped in Irbil, the capital of the Kurdistan region, to meet with Kurdish President Masud Barzani.

FOB Warrior houses roughly 4,000 people, mostly airmen and soldiers. About 300 of them peppered the Pentagon chief for about 45 minutes with a range of tough questions, including how whether the military would have to confront Iran over its nuclear ambitions, and why the U.S. was still at war eight years after September 11.

Gates said he understood that Americans were tired of war, but that in his mind the right focus on the &#8220;second&#8221; war in Afghanistan was just beginning.

&#8220;I think it&#8217;s a mistake to look at Afghanistan as sort of one eight-year war,&#8221; said Gates. &#8220;We had a war in 2001, 2002 which we essentially won. The Taliban was kicked out of Afghanistan, al-Qaida was kicked out of Afghanistan [or] many of the killed, and then things were very quiet in Afghanistan until about the end of 2005, when the Pakistanis created this opening for the Taliban on their side of the border. And the level of violence, beginning in the spring of 2006 has just increased significantly.&#8221;

The secretary also said that because Iran was not living up to promises made this fall, the international community would likely impose further sanctions, but did not hint at any potential U.S. military action.

Israeli defense leaders have pressed Gates and the Obama administration for a quicker timeline toward a military response, but Gates said he felt there was still time for sanctions to work, especially given the domestic political opposition emerging after this fall&#8217;s elections.

One airman at the outdoor townhall, held in a small gravel courtyard lined by T-walls and assault vehicles, asked what the strategic future of the Air Force would be, beyond nuclear deterrence and intelligence surveillance.

&#8220;We probably are going to undertake a new long-range strike capability for the Air Force,&#8221; Gates said. The initiative would come out of the Pentagon&#8217;s four-year defense review due at the end of this year and would look at &#8220;a family of capabilities, both manned and unmanned.&#8221;

One soldier on his last day of deployment, Lt. Felice Terrigno, 29, of Bridgeton, N.J., missed his morning flight home so that the secretary could personally pin a Purple Heart to his chest.