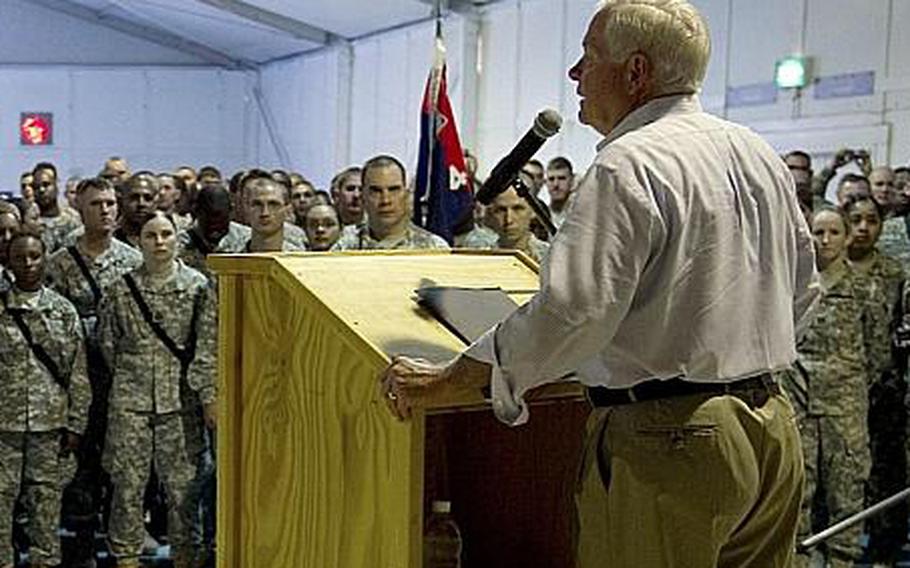 CAMP RAMADI, Iraq &mdash; Defense Secretary Robert Gates launched into a brutal assessment of the military&rsquo;s health care system, Tricare, this week, calling it a constant source of complaints from troops and badly in need of financial reform in the face of rapidly increasing cost estimates to the federal government.

Gates for months has called on Congress and the Defense Department to head off the potentially explosive costs facing military health care in coming decades for millions of young servicemembers who have served in Iraq and Afghanistan. Health care cost the department $19 billion in 2000, but is estimated to reach $50 billion in fiscal 2011 and $65 billion by 2015, according to Gates.

One of the reasons behind the deficit is that Tricare has not increased premiums in nearly 15 years since its creation in 1996. Active-duty personnel and their families should not have to pay higher health care premiums to finance those reforms, Gates told a gathering of several hundred soldiers at Camp Ramadi in Anbar province. Rather, he suggested possibly charging higher premiums and co-pay fees to those retired personnel using the system who have access to private health care plans through their employers.

Pentagon planners have pushed for those premium increases for years, but veterans groups and many members of Congress &mdash; both Republican and Democratic &mdash; have strongly opposed such a move. Congressional budget planners have removed the idea from the Pentagon&rsquo;s annual budget proposal multiple times over the last decade. The Defense Department did not include the rate hikes in their fiscal 2011 plan.

&ldquo;In terms of people on active duty, I would be surprised to see any significant changes in their costs at all,&rdquo; he said.

Complaints and concerns about the Tricare system are frequently raised in troop meetings with top military leaders and it was a young soldier who asked Gates about the state of military health care reform in the question-and-answer session.

&ldquo;I get briefings at the Pentagon all the time about how popular Tricare is and how everybody&rsquo;s happy with it,&rdquo; Gates responded. &ldquo;Well, I tell you, I&rsquo;ve been on this job going on four years and I&rsquo;ve visited a lot of folks, a lot of facilities, a lot of ships, a lot of air bases and I have yet to find somebody stand there and tell me this is a great system.

&ldquo;Instead I hear all kinds of stories about bureaucratic hassles, about difficulty in finding a primary caregiver, having to wait in line a long time [and] having to drive a considerable distance to see a specialist.&rdquo;

At Fort Bragg in June, one soldier asked visiting Adm. Mike Mullen, chairman of the Joint Chiefs of Staff, if the installation was adequately prepared to handle the expected influx of thousands of more troops and families coming with the base realignment plan.

Her daughter already endured a six-month waiting list at the on-base military hospital to get treatment for a rare disease. Instead, the mother had to seek private, and much more expensive, off-base health care.