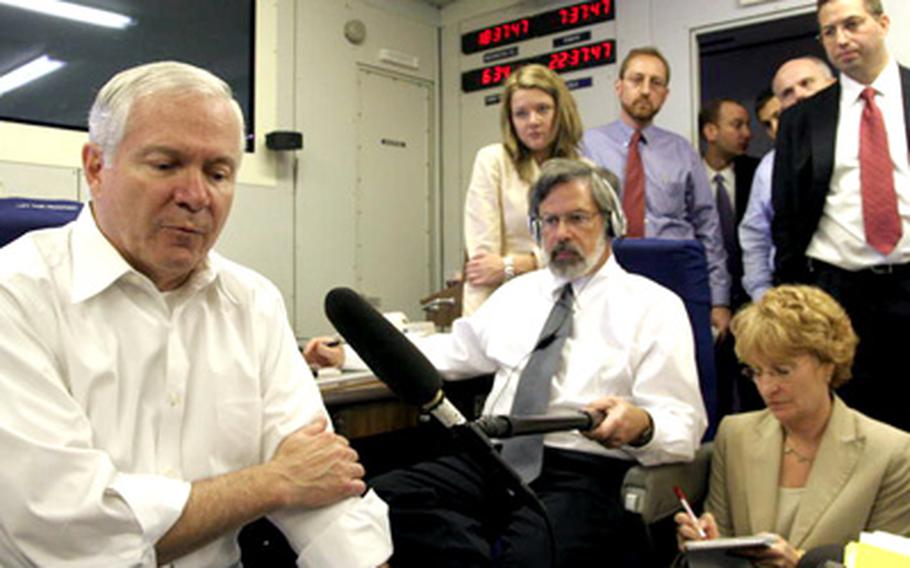 Secretary of Defense Robert Gates speaks to reporterstraveling with him aboard the E4-B "Doomsday" plane enroute from Honolulu to Tokyo on Monday. (Kevin Baron / S&S)

ABOARD A MILITARY AIRCRAFT &#8211; President Barack Obama should not wait for a clear resolution to the post-election complexities in Afghanistan before making his decision on the administration&#8217;s war strategy, Defense Secretary Robert Gates said on Monday.

Speaking to reporters on his plane shortly after attending a change-of-command ceremony in Hawaii, Gates volunteered his reaction to remarks made over the weekend by White House Chief of Staff Rahm Emmanuel and spokesman Robert Gibbs.

Those officials, as well as NATO Secretary General Anders Fogh Rasmussen, indicated they wanted to wait until questions of Afghan leadership legitimacy were settled, possibly after Afghan election results were finalized by a runoff vote, before making a strategy decision.

The U.S. and its international partners will have to work with any Afghan government going forward, he said.

&#8220;The reality is, even though the president has further significant decisions in front of him, we already have 68,000 American troops on the ground in Afghanistan and almost 40,000 troops from other countries,&#8221; Gates said. &#8220;They&#8217;re not all just staying in their tents while we await the outcome of the election. They&#8217;re out doing operations. They have a mission.&#8221;

His spokesman, Geoff Morrell, later added, &#8220;The legitimacy question goes beyond who is declared the victor of the elections. Does this government, whoever&#8217;s in charge, have the full faith and confidence of the Afghan people? And that&#8217;s a question that&#8217;s not going to be made overnight.&#8221;

The secretary said he did not expect a final strategy decision from Obama for some time, given that he and the chairman of the Joint Chiefs of Staff, Adm. Mike Mullen, were traveling overseas this week, and Secretary of State Hillary Rodham Clinton was traveling into next week.

But time is not on the administration&#8217;s side, Gates added. With winter on the horizon, he expressed concern that Afghan citizens would not be able to make it to the polls in inclement weather for a runoff vote.

The secretary was confident that virtually all of the countries already committing troops for election security would keep their forces in place.

Gates is on his way to meet with NATO defense ministers in Slovakia this week, and is first stopping in Tokyo and Seoul, South Korea. He will bring no specific request for troops or economic assistance, he said, but did say he would look for those countries to share in the burden of Afghan success.

&#8220;This is an alliance issue,&#8221; he said. &#8220;It should not be looked upon as exclusively the responsibility of the United States to respond. And so I think having a discussion about that, and the fact that this is a continuing shared responsibility makes it entirely appropriate to have that conversation in Bratislava before decisions are made by the United States.&#8221;

Gates said he and Mullen had sensed a &#8220;renewed commitment&#8221; from their NATO military and civilian counterparts this year, and hoped the alliance would reassess the state of the Afghanistan war.

Previewing his Tokyo arrival, the secretary said he would welcome any contribution to war, economic or military, from Japan or South Korea. He hoped the Japanese would view their mission of refueling coalition ships helping the Afghanistan war effort as a contribution to international partners, not just the United States.