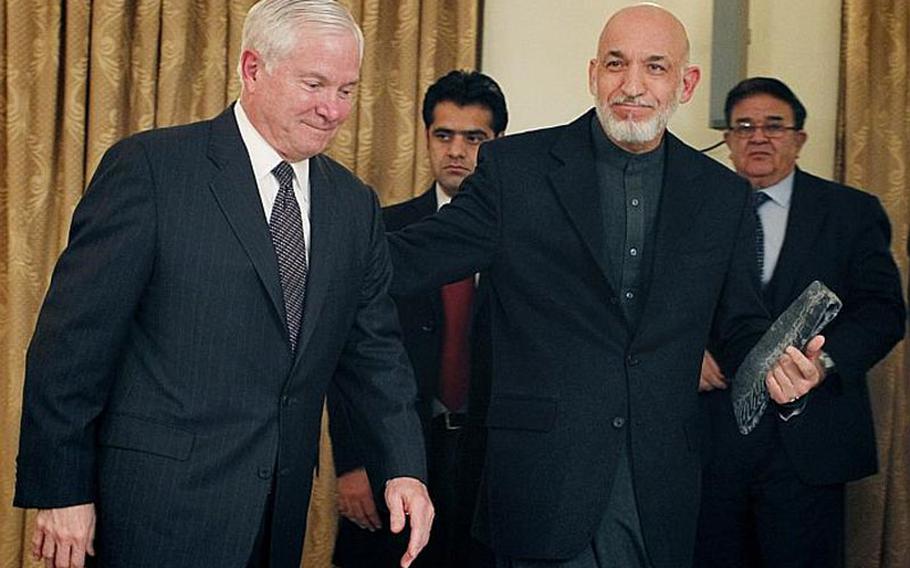 In this file photo, Defense Secretary Robert Gates is escorted by Afghan President Hamid Karzai after a joint press conference at the presidential palace in Kabul during a past visit. (Musadeq Sade/AP)

KABUL, Afghanistan &mdash; Pakistan is increasingly tackling terrorist havens on its side of the border with Afghanistan and growing cooperation between the two countries and U.S. forces is a key development, Defense Secretary Robert Gates said Wednesday.

Gates, on a three-day visit to Afghanistan, met Wednesday evening with Afghan President Hamid Karzai following tours of the battlefield Tuesday and Wednesday morning, where he met with U.S. troops.

The Afghan forces, Gates said at a news conference following the meeting, had made great strides not just in expanding, but in the &ldquo;increased quality of our partners,&rdquo; a show of confidence in the wake of last week&rsquo;s killing of six U.S. soldiers by an Afghan police officer who turned his weapon on his American trainers.

Gates said he was returning to Washington &ldquo;convinced that our strategy is working and will be able to achieve key goals&rdquo; of handing control over to Afghan forces so that they can take the lead throughout the country by 2014.

The defense secretary said increasing cooperation between Afghanistan, Pakistan and U.S.-led coalition forces was encouraging. It was important to recognize that Pakistan has had nearly 140,000 troops fighting insurgent and terrorist forces in the country&rsquo;s northwest over the past 18 months, he said.

&ldquo;There is a common understanding that these safe havens are a threat to both governments, Afghanistan as well as Pakistan,&rdquo; Gates said. &ldquo;There is a growing coordination of military operations on both sides of the border, Afghan forces, Pakistani forces and ISAF (International Security Assistance Force). It is a very important, positive development.&rdquo;

He said his army and police were making improvements but stressed that they would require help from the international community for some time.

Gates added that turning over security control to Afghan forces is dependent on Afghans receiving proper training and &ldquo;the proper equipment to do the job.&rdquo;

Karzai noted that the Afghan National Army and police were equipped only with lighter weapons, while they will ultimately require heavier equipment &mdash; armored vehicles and proper air power.

The news conference was also an opportunity for Karzai to add some levity to another area of tensions after the recent release by Wikileaks of secret diplomatic cables revealed that U.S. officials, particularly Ambassador Karl Eikenberry, viewed Karzai as erratic and unreliable.

Asked directly about this at the news conference, Gates said the revelations of the documents were &ldquo;extraordinarily embarrassing&rdquo; for the United States, but &ldquo;America&rsquo;s best partners and friends &mdash; and I include President Karzai &mdash; have responded in an extraordinarily statesmanlike way.&rdquo;

The U.S. was deeply grateful, he said, and would not forget it.

Praising his own relationship with Karzai, Gates said he&rsquo;d been meeting for four years with Karzai and didn&rsquo;t think either would be embarrassed to have any of those conversations made public.

Karzai later joked about a discussion he had with Gen. David Petraeus, the top U.S. commander in Afghanistan, over getting armored vehicles for Afghan forces.

Karzai then turned to Petraeus and asked in mock concern: &ldquo;Is that secret?&rdquo;

&ldquo;Well, you shouldn&rsquo;t share things like that with presidents,&rdquo; Karzai said with a smile. &ldquo;We are Wikileaks.&rdquo;