Gates: History will reveal what the U.S. achieved during Iraq war 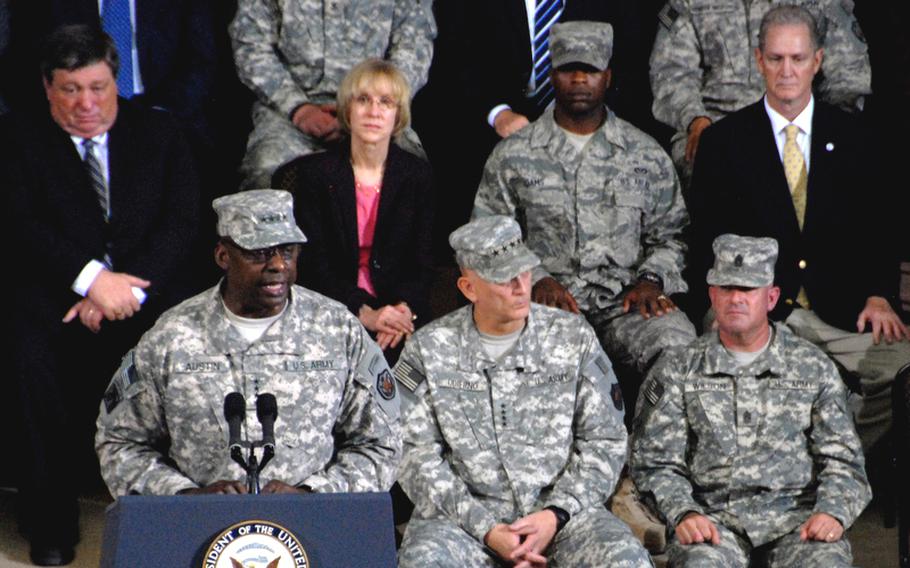 Buy Photo
Gen. Lloyd Austin acknowledged that Iraq still faces steep challenges, including a recent rise in violent attacks around the country. Austin pledged to work with both the government and the military to address the difficulties. "We will face these challenges together," Austin said. (Teri Weaver/Stars and Stripes) 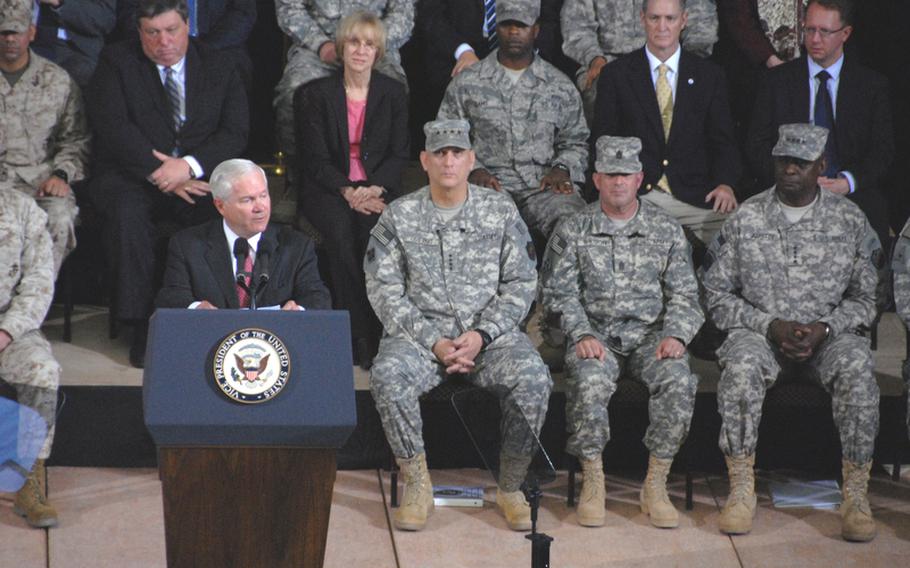 Buy Photo
Secretary of Defense Robert Gates attended Wednesday's ceremony, praising Gen. Lloyd Austin, the new top military officer in Iraq. Gates spoke directly to the troops serving in Iraq, acknowledging that much of the attention back home is focused on Afghanistan. "You should know," Gates said, "your work here going forward is critical for the future of this part of the world and the national security of the United States." (Teri Weaver/Stars and Stripes) Buy Photo
Vice President Joe Biden on Wednesday called on Iraqi leaders to settle the six-month government impasse. "The Iraqi people voted in large numbers across communities," he said during the change-of-command ceremony at al-Faw palace that put Gen. Lloyd Austin in charge of U.S. troops. (Teri Weaver/Stars and Stripes) 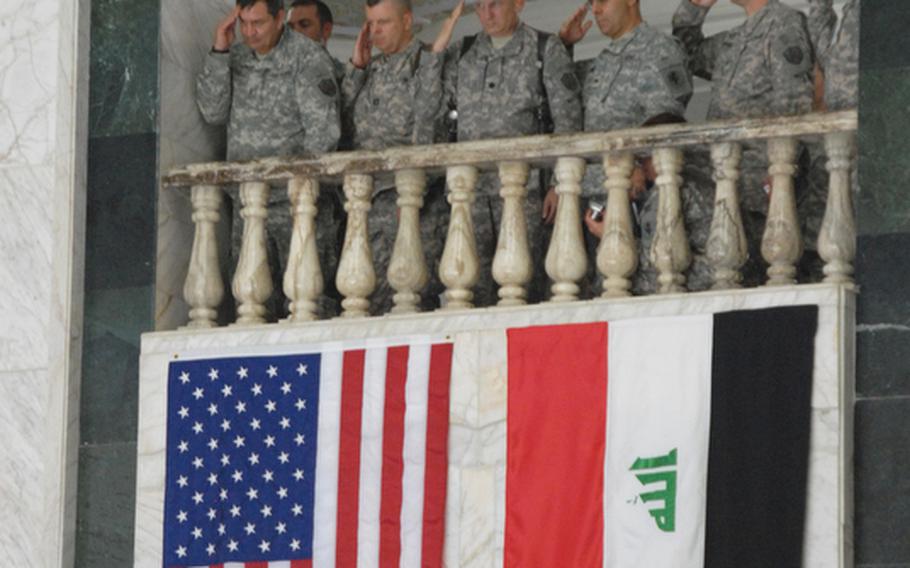 BAGHDAD &mdash; Defense Secretary Robert Gates said Wednesday that history will determine whether more than seven years of war in Iraq was worth the cost, even as he acknowledged that U.S. invasion of the country will always be controversial.

&ldquo;I believe ... [and] our men and women in uniform believe, we have accomplished something that makes the sacrifice and the bloodshed not to have been in vain,&rdquo; Gates said.

&ldquo;The problem with this war, I think, for many Americans, is that the premise on which we justified going to war turned out not to be valid,&rdquo; he said. &ldquo;Even if the outcome is a good one from the standpoint of the United States, it&rsquo;ll always be clouded by how it began.&rdquo;

But on Wednesday, less than 24 hours after President Barack Obama sat in the Oval Office and formally announced the end of combat operations, the focus was on the recent gains that made possible a ceremony signaling the end of Operation Iraqi Freedom and the beginning of Operation New Dawn. Gates was joined by Vice President Joe Biden, Joint Chiefs chairman Adm. Mike Mullen, outgoing war commander Gen. Ray Odierno, new commander Gen. Lloyd Austin and others in the gaudy, chandeliered rotunda of Saddam Hussein&rsquo;s al-Faw palace, now the U.S. military headquarters in Iraq.

The U.S. is no longer at war in Iraq, Gates said during a visit to Camp Ramadi earlier in the day. He reiterated that there is much work for about 50,000 U.S. troops still here. That work includes overseeing police training and providing intelligence to the Iraqi government and security forces through 2011, when all U.S. troops are scheduled to leave.

Facing that new deadline, U.S. officials are publicly pressing Iraqi leaders to form a government. Six months of negotiations between major factions after a razor-thin election result have proven fruitless.

Until now, U.S. officials have played a daily role as mediators and advisors but publicly have said they wanted Iraqis to form a government on their own timeline.

&ldquo;I strongly urge them to match the courage their citizens have shown by bringing this process to a close and forming a government,&rdquo; Biden said at the change-of-command ceremony.

Added Odierno: &ldquo;It is time for Iraq to move forward.&rdquo;

Odierno received lengthy standing ovations from servicemembers eagerly snapping photographs before and after a fiery farewell address that signaled the end of his five years in Iraq.

After praising and thanking his Iraqi counterparts, and encouraging those troops who serve under him, Odierno snapped off his call sign one last time: &ldquo;Lion Six, out.&rdquo;

Odierno&rsquo;s next post will be in Virginia as the head of Joint Forces Command, where he&rsquo;s been asked to carry out Gates&rsquo; plan to close the command and provide savings to an unwieldy defense budget.

The transition in Iraq, Obama said in his Tuesday speech, fulfills a key 2008 campaign promise, and allows the military to better focus on the mission in Afghanistan. Under Obama, the U.S. shrunk its force in Iraq by more than 96,000 troops and closed hundreds of bases across the country.

When a U.S. soldier in Ramadi asked Gates whether he expected a military presence here after 2011, Gates said no formal requests have been made and any extension of the U.S. presence would require the agreement of the yet-unformed Iraqi government.

&ldquo;We&rsquo;d obviously be willing to look at that,&rdquo; Gates said. &ldquo;I don&rsquo;t know what informal conversations have taken place, but certainly on a formal level, and certainly within any authority, there have been no discussions. And we are planning on being out of here at the end of 2011.&rdquo;