Gates gives thanks for new MRAPs 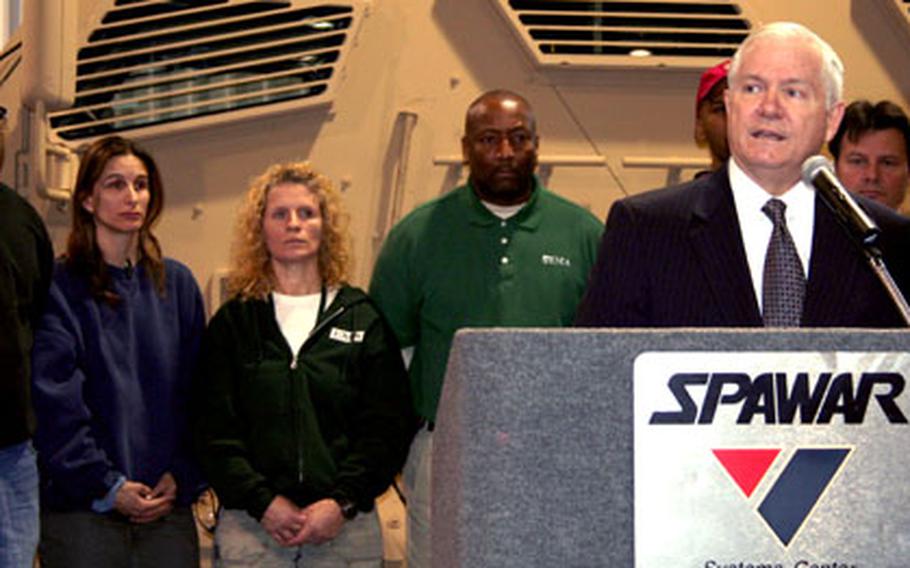 Defense Secretary Robert Gates thanks workers Friday at the Space and Naval Warfare Systems Center in Charleston, S.C., where Mine Resistant Ambush Protected vehicles are outfitted with communications and other gear. (Jeff Schogol / S&S)

Defense Secretary Robert Gates thanks workers Friday at the Space and Naval Warfare Systems Center in Charleston, S.C., where Mine Resistant Ambush Protected vehicles are outfitted with communications and other gear. (Jeff Schogol / S&S) 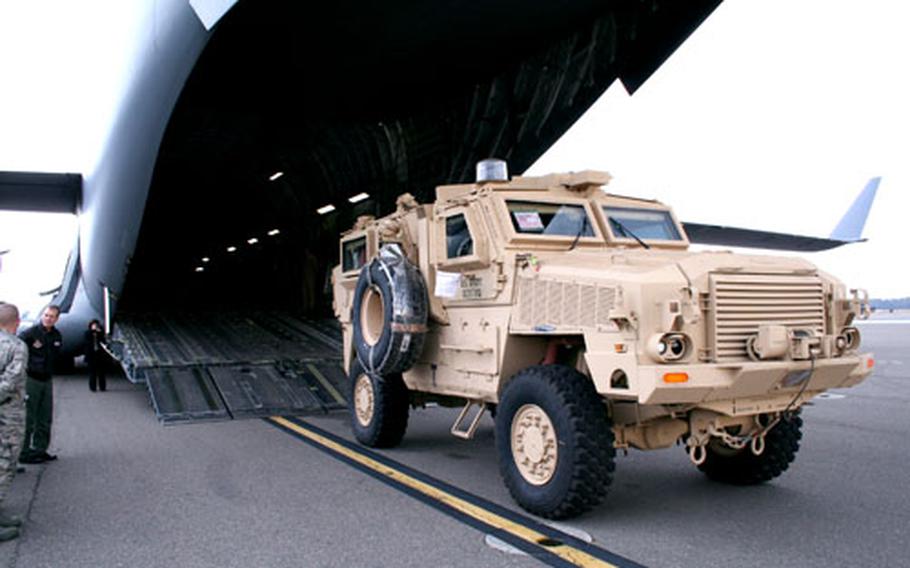 A Mine Resistant Ambush Protected vehicle is loaded on a C-17 aircraft in Charleston, S.C., before heading downrange. (Jeff Schogol / S&S)

The e-mail, which was passed on to Gates, is from a sergeant major who described the vehicles as &#8220;just lovely,&#8221; Gates said.

If it sounds odd for a sergeant major to use the word &#8220;lovely,&#8221; that&#8217;s because Gates admitted to using some poetic license in describing the servicemember&#8217;s enthusiasm for the vehicles.

&#8220;He was actually considerably more colorful than that in his comments,&#8221; said Gates in a speech Friday.

Gates spoke at the Space and Naval Warfare Systems Center in Charleston, S.C., where MRAP vehicles are outfitted with radios, jammers and other gear before being shipped downrange.

He thanked the workers there for their efforts to save the lives of U.S. troops.

&#8220;You have my appreciation and my respect, but more importantly, the thanks of countless moms and dads, husbands and wives, and sons and daughters of U.S. troops deployed abroad,&#8221; Gates told the workers.

Gates said Friday that the need for MRAP vehicles will not go away in the near future, telling reporters after his speech that the number of explosively formed penetrator attacks in Iraq this month has already equaled the total number for December.

One type of MRAP vehicle &#8211; the RG-31 &#8211; has also proven to be well suited for duty in Afghanistan, so a number of the vehicles might be deployed there, officials said.

As part of an effort that began last year to get as many MRAP vehicles downrange as quickly as possible, about 2,225 vehicles have been delivered to the U.S. Central Command theater of operations, of which about 45 have been fielded to U.S. troops in Afghanistan and 1,463 to troops in Iraq, officials said.

He explained MRAP vehicles need to be fitted with additional equipment after they arrive in theater and that troops must train on them before they go to their intended units.

&#8220;This is something that really went right, and it involved like I just said, everybody doing the right thing, from the president to Congress on down,&#8221; Gates said.