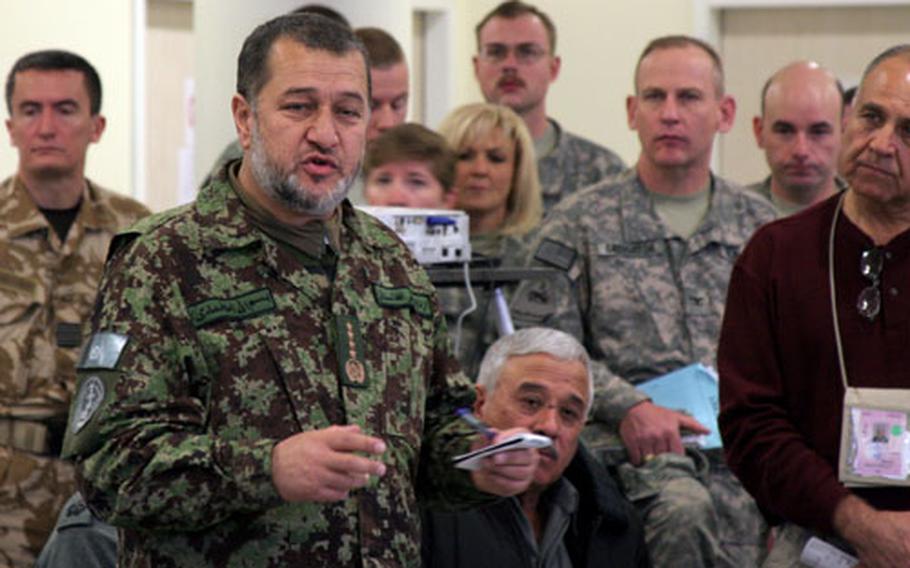 The secretary assured the hastily gathered delegation before he departed the country that the U.S. would remain committed to Afghanistan well beyond the July 2011 date the Obama administration has set to begin transferring security control and withdrawing American troops.

&#8220;While we hope and expect to begin transferring security responsibility by July of 2011, we will have a large number of forces here for some period beyond that,&#8221; he said, before leaving for Iraq and the second leg of his trip. &#8220;This is a relationship forged in blood.&#8221;

Lt. Gen. David Rodriguez, commander of the new ISAF Joint Command, had organized a trip to Kandahar for leaders from ISAF, the Afghan National Army, the Afghan National Police and other government officials &#8220;to discuss the game plan&#8221; there ahead of the arrival of more than 35,000 U.S. and international forces arriving beginning this month, according to Geoff Morrell, the secretary&#8217;s spokesman.

But the party was delayed by the same bad weather that forced the secretary to alter his own in-country travel plans this week.

&#8220;This is the first time in Afghan history that foreign military forces are here to help Afghanistan,&#8221; Gates said, wearing a Department of Defense logo bomber jacket, standing before a semi-circle of a few dozen generals, government ministers and their staff. &#8220;And we all intend to be your partners for a long time into the future,&#8221; he added.

Gates had scheduled a Wednesday visit to Forward Operating Base Frontenac in Kandahar, but was unable to leave Kabul for the duration of his two-night stopover.

Sitting next to Ambassador Eikenberry, Gates listened as Muhammadi thanked the secretary for the U.S. commitment, calling the Obama administration&#8217;s strategy decision a &#8220;golden chance for Afghanistan,&#8221; he said.