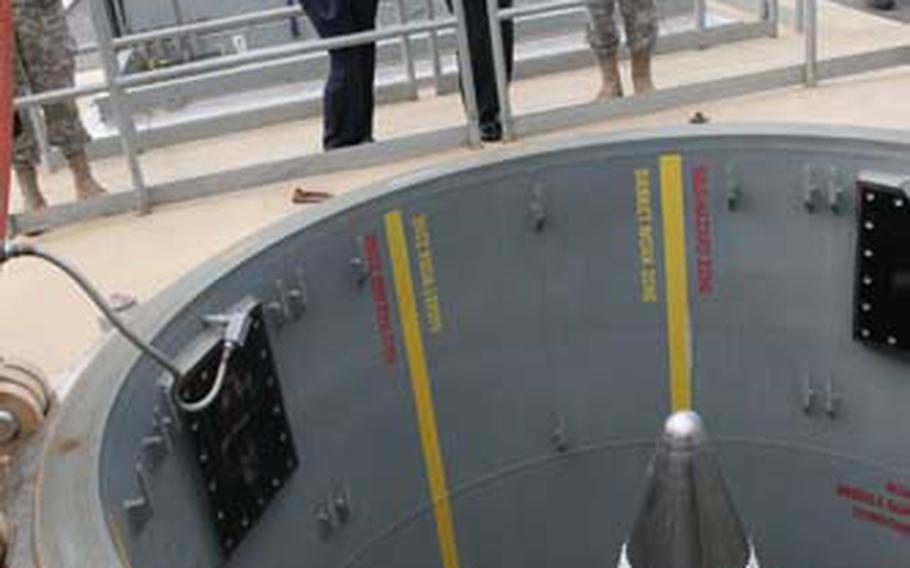 In the whipping wind of the interior of America&#8217;s 49th state, which is potentially within range of North Korea&#8217;s long-range missiles, Gates made perhaps his strongest case for U.S. missile defense programs since the Obama administration has come to office.

&#8220;I would say that if there were a launch from a rogue state, such as North Korea, I have good confidence that we would be able to deal with it,&#8221; he said.

&#8220;Knowing that we have the capability, and that it becomes more effective with each passing day, should be a source of comfort to the American people.&#8221;

Following last week&#8217;s nuclear and missile tests conducted by the North Korean government and several reports that a long-range Taepodong-2 missile was moved to a launch pad near China, Gates continued to downplay Pyongyang&#8217;s rhetoric and actions as unsurprising.

The secretary, wrapping up a six-day trip through Singapore and the Philippines, continues to say that despite the Kim Jong-Il government&#8217;s proclamations, their weapons pose no nuclear threat to the United States.

The Pentagon had scheduled Gates&#8217; silo visit before North Korea&#8217;s tests began. The secretary wanted to visit with troops stationed in the &#8220;Last Frontier&#8221; state for the first time, and gain support for his first Obama administration budget, according to the Pentagon press secretary, Geoff Morrell.

But by Monday, Gates&#8217; visit placed the Pentagon chief squarely in the middle of America&#8217;s first defense against the North Korean threat.

He climbed down a hatch to the base of a silo holding one of the 54-foot long, 4-foot diameter, ground-based interceptors, or GBIs.

Gates later remarked that he remembered 40 years ago he was a lieutenant at an Air Force base that had Minuteman missiles.

But in Washington, some in Congress are seriously eyeing Gates&#8217; proposal curbing the growth of U.S. missile defense arsenal.

Fort Greely eventually will hold 26 GBIs, and with four GBIs located in Vandenberg Air Force Base in southern California, Gates said that total &#8220;more than meets the need.&#8221;

The secretary frequently has said this year that the threats of &#8220;conventional&#8221; warfare coming from other global powers possessing long-range missiles did not warrant continued expansions.

On his tour through Asia this weekend, Gates said his budget choices were made based on &#8220;strategic reality&#8221; rather than perceived threats of what other states might be able to achieve.

Speaking to a town hall of 300 soldiers and airmen in a hangar at Elmendorf, he once again said that every dollar saved on an unneeded weapons procurement program was a dollar that could be spent on troops and their families.

Critics of missile defense have said the program reflects just that: an outdated and extremely costly response to Cold War threats that no longer exist.

Gates, arguing his case to the gathered troops, said U.S. arsenals are so greater than those of China or Russia he felt confident in his proposed cuts.

Elmendorf is home to some of the most advanced fighters in the world, F-22 Raptors, perhaps the most widely discussed of Gates&#8217; program cuts.

&#8220;I&#8217;m confident we have the country protected and are able to prevail wherever along that spectrum of conflict we end up fighting.&#8221;

Gates told the airmen he feels the Air Force would require a &#8220;cultural change&#8221; if, for example, the Army was going to be able to rely on the Air Force&#8217;s already expansive fleet of more than 200 C-130 cargo planes for its logistics needs rather than buying its own fleet.

Ultimately, Gates said his budget critics should focus on the worth of defense programs, rather than the dollars.

&#8220;As I told the Congress, I am a strong supporter of missile defense, but I think we need to put the money where we can actually get some value out of it&#8221; he said.

He would not guess about the prospects of his budget before Congress, but noted the expected critics were keeping quiet.