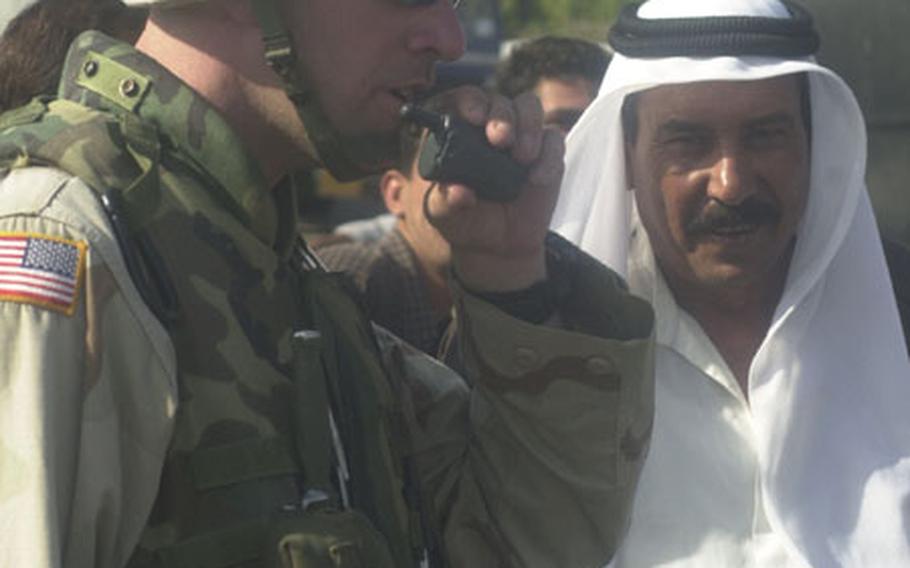 Staff Sgt. Eric Roblee talks on his radio Friday afternoon in an effort to verify that a local sheik has an appointment at Muleskinner Camp in Iraq. Roblee says he enjoys the activity at the entrance of the base. (Terry Boyd / S&S)

Staff Sgt. Eric Roblee talks on his radio Friday afternoon in an effort to verify that a local sheik has an appointment at Muleskinner Camp in Iraq. Roblee says he enjoys the activity at the entrance of the base. (Terry Boyd / S&S) 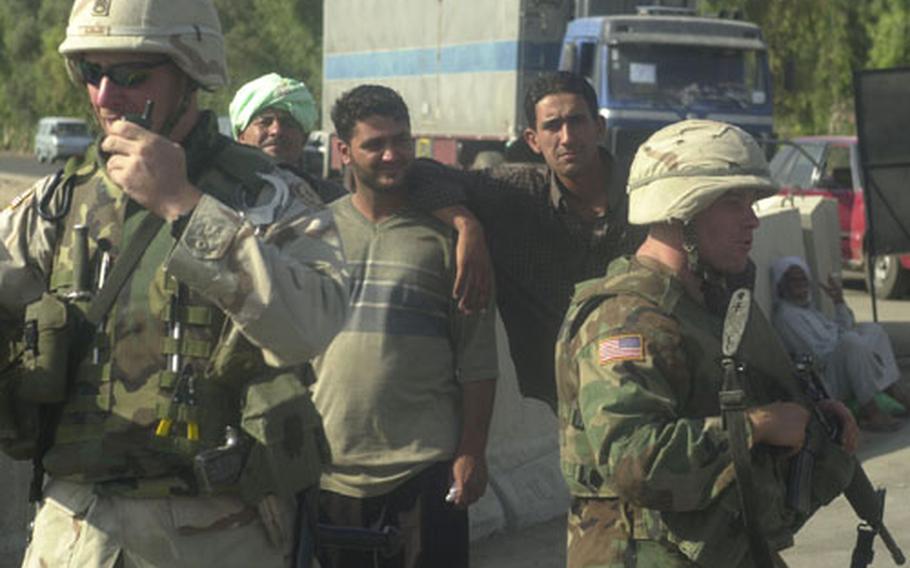 With Iraqi men relaxing in the background, Pfc. Russel Beasley, right, and Staff Sgt. Eric Roblee try to bring some semblance of order Friday afternoon to the front gate at Muleskinner Base on the southeastern edge of Baghdad, Iraq. Roblee is enjoying his time in Iraq and has been known to stop traffic to shake hands with grooms in wedding parties. (Terry Boyd / S&S)

BAGHDAD, Iraq &#8212; Staff Sgt. Eric Roblee is just about fed up with all the complaining, whining and bellyaching.

Roblee, of Headquarters, Headquarters Troop, 4th Squadron, 2nd Armored Cavalry Regiment, cannot abide what he says are whiny soldiers writing sniveling letters to Stars and Stripes for the Letters to the Editor page.

Even the soldiers in his own division, the Fort Polk, La.-based 2nd ACR, really get his goat.

Griffin, Beasley and Drange are all from the 2nd ACR&#8217;s Regimental Support Squadron, with Roblee assigned to Headquarters, Headquarters Squadron. The crew guards the main gate to Muleskinner Base, a giant former Iraqi air base and air college on the southeastern edge of Baghdad. It is now the main 2nd ACR base.

To join the Ruffnecks, soldiers must have the same dedication to the job, protecting Muleskinner. They have to dig it all the way down to the 112-degree afternoons in battle rattle. They have to &#8220;embrace the suck,&#8221; as American soldiers in Iraq tend to put it.

Though the tall, talk-a-mile-a-minute Texan leaves the sneaking suspicion he just made up the whole &#8220;Roblee&#8217;s Ruffnecks&#8221; thing on the spot, Roblee is so jazzed that no one seems to want to put a damper on it.

During a couple of hours on the gate at Muleskinner, it&#8217;s easy to see what he means. It&#8217;s a very interesting job. Missions and convoys enter and exit, alternating with contractors and crews. Abrams M1A1 tanks rumble past.

As they try to sort through the mobs trying to enter the base, they engage all kinds of Iraqis, talking with everyone from sheiks to neighborhood kids. The gate guards regularly wave at locals, with locals waving and smiling back. Roblee&#8217;s Ruffnecks even have known to stop traffic to shake hands with brides, grooms and their wedding parties rolling past Muleskinner Base.

After their duty day, the Ruffnecks&#8217; idea of fun is to imitate World Wrestling Entertainment stars while jumping off diving boards at the Muleskinner swimming pool.

&#8220;Yes, we have fun,&#8221; Roblee says. But, he adds, they never lose sight of guarding the 4,500 soldiers on the sprawling base. So far, Muleskinner is the rare U.S. base with no direct attacks, and no casualties lost to the terrorists.

So, have Roblee&#8217;s suck-it-up attitude and his group&#8217;s antics made them popular? Hardly. Roblee admits he and the Ruffnecks are in the distinct minority.

Ask other 2nd ACR soldiers, and they just shake their heads and roll their eyes.

Roblee and Griffin love the military, but definitely not the Army. They can&#8217;t wait to get back to the Marines, which has stronger camaraderie, better discipline and greater respect for rank, they say.

Griffin and Roblee are even less fond of civilian life.

Griffin, who deployed to the Philippines, Okinawa, Haiti and Liberia as a Marine, was &#8220;bored as hell&#8221; as a district manager for Taco Bell in Arkansas between leaving the Marines and coming into the Army.

Managing restaurants &#8220;was more stressful than this. And it was the same thing every day,&#8221; says Griffin, who spends much of the day perfecting his Arabic.

He wanted to come to Iraq, and volunteered to deploy even before the 2nd ACR was notified it would be deployed.

Yes, Roblee says, he misses his two kids from a former marriage, &#8220;but now I have nothing but this.