Gas rates rising 21 cents in some parts of Europe 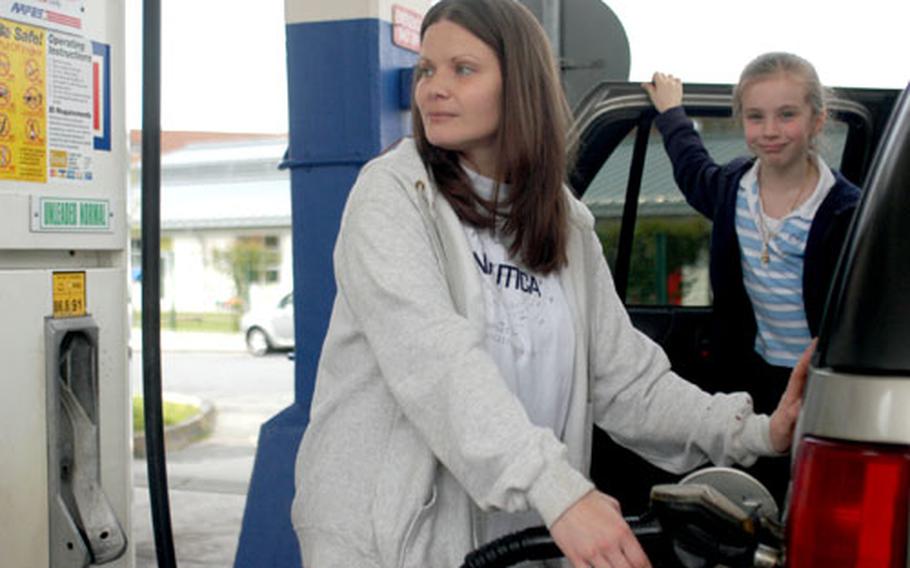 Mindy Palmquist and her daughter, Celeste, 6, add about $10 of gas to their car Thursday on the Lincoln Village Car Care Center gas station in Darmstadt, Germany. Palmquist was getting as much gas as she could before prices rise about 20 cents per gallon on May 1. (Jessica Inigo / S&S)

DARMSTADT, Germany &#8212; Gas prices are going up again, this time as high as 21 cents in some parts of Europe.

Melanie Joiner, of the Babenhausen community, spent $42 to put 19 gallons of regular unleaded gas in her Pontiac van at the Darmstadt gas station Thursday. Had she waited two days, those same 19 gallons would have cost her an extra $3.80, which she said is several bucks she&#8217;s more than happy to spend.

Maj. Dave Accetta, an AAFES spokesman, said using the current euro-to-dollar exchange rate, a gallon of normal unleaded gas at a pump on the economy in Germany would be $5.98.

Despite these savings, other drivers said AAFES is not being fair with its pricing.

AAFES paid $1.78 per gallon of regular unleaded in Germany for May and $2.20 for diesel, said Debbie Byerly, a spokeswoman for AAFES. Customer prices include other factors, such as the cost of running the coupon program.

However, prices are not based on what AAFES pays, but rather a market-based policy on the average price for gas in the States as reported by the Department of Energy.

Byerly said gas prices are going up overseas because prices in the States are on the rise.

Diesel, which is sold only through the coupon program, is going up about 11 cents a gallon in Germany, 10 cents a gallon in the United Kingdom, staying the same in Turkey, and will be 13 cents cheaper in the Netherlands. A gallon of diesel without coupons in Germany would cost $5.32 vs. $2.40 with coupons, Accetta said.

So far, this has been a year of high gas prices. Since January, AAFES&#8217; prices have gone up 34 cents a gallon for regular, 25 cents for super, 34 cents for super plus, and 23 cents for diesel.

Plus, drivers are paying more than 40 cents higher for fuel than this same time last year.