Gas prices up for sixth month in a row in Italy 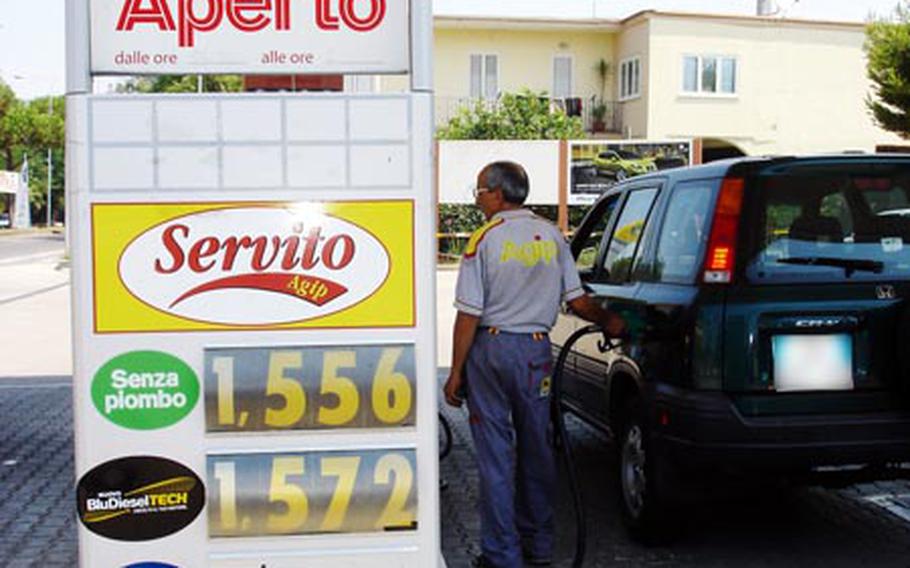 NAPLES, Italy - For the sixth month in a row, gas coupon prices across Italy have gone up. As of Friday, customers are paying $131 for a 100-liter booklet for unleaded gasoline and $155 for diesel, a Navy official said.

The price increase is spurred by the rising cost in barrel prices and the dismal U.S. dollar-to-euro exchange rate, said Bart Di Muccio, administrator for the Tax-Free Office, which runs the fuel coupon program.

The Navy&#39;s Tax-Free Office in Italy negotiates fuel purchase contracts in euros, Di Muccio said, a factor that contributes to the higher prices that servicemembers in Italy pay when compared to other parts of Europe. In Germany, for example, the cost for a gallon of regular unleaded gas is $4.16, and diesel is $5.09.

The Army and Air Force Exchange Service, which manages the fuel program in Germany and most other European countries where military bases are located, sets its prices weekly by adding the cost of running the program to the average U.S. price for fuel. It does not factor in the actual purchase cost of fuel overseas, which also is done in euros, said Lt. Col. David Konop, AAFES spokesman.

The Navy Exchange, which runs Italy&#39;s program, adds up to a 15 percent surcharge for what it pays for fuel.

But the Navy could be changing the surcharge rate, Di Muccio said Thursday.

"Taking into consideration the spiking price of oil and the weak value of the dollar to the euro, this surcharge is being reviewed," he said.

"We will make every effort to ensure the surcharge is the amount required to cover overhead costs. Nothing more, nothing less," he said, stressing the program is not for profit.

Through the coupon program, Americans and NATO personnel in Italy don&#39;t pay the tax on fuel that motorists pay at the pump; and the "tax exemption" from the Italian government amounts to $47 million this year, he said.

"They watch us very closely," Di Muccio said, "and if they thought there was any profit, they&#39;d be on us like a ton of bricks."

Each month, Di Muccio&#39;s office sets prices for fuel coupons in Italy by calculating changes in the barrel price of oil, fluctuations in the exchange rate between the dollar and the euro, and any gains or losses the Navy Exchange and AAFES incurred in the previous month&#39;s sales, Di Muccio said.

Coupons are sold at Italy-based NEX and AAFES outlets. Americans and NATO personnel don&#39;t have access to on-base stations, and instead redeem the coupons for fuel at participating Esso or Agip stations.

"We are purchasing the fuel in euros, and the overhead costs often are paid in euros," Di Muccio said.

"Please take into consideration: whilst the price of oil increases, the purchasing value of the dollar has decreased 37 percent in five years. On our side, had the dollar remained as it were five years ago, we would be paying 37 percent less."