Gas prices for Italy to drop 45 cents next month 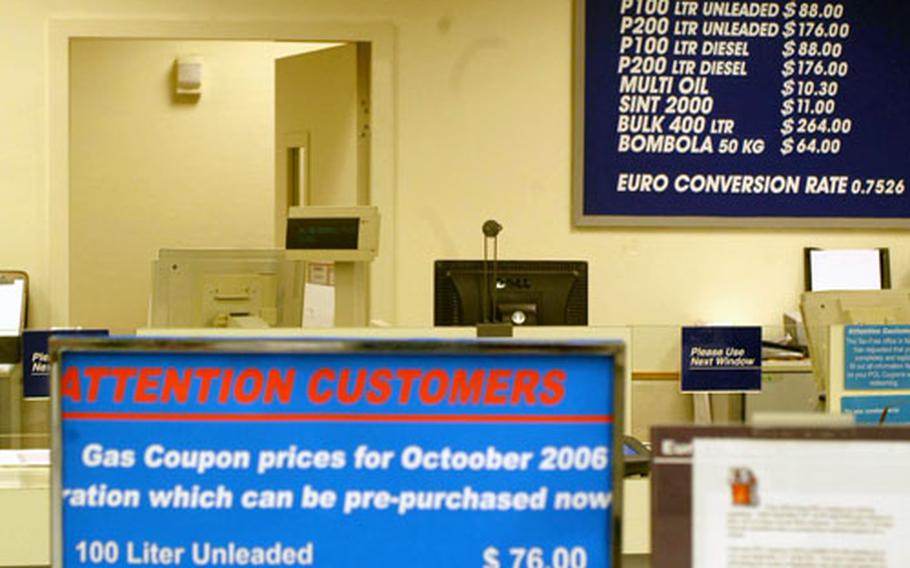 In a few days, the prices listed on a temporary sign in the foreground will replace those currently up on the big board at the Army and Air Force Exchange store at Aviano Air Base, Italy. That’s good news for customers, who will save about 45 cents a gallon in October from the prices they paid in September. (Kent Harris / S&S)

NAPLES, Italy &#8212; With fuel prices in Italy dropping 45 cents per gallon next month, Petty Officer 2nd Class Brent Stokes says his trip to Germany is back on.

The cost for gasoline coupons in Italy will drop by $12 per 100-liter booklet beginning Oct. 1.

Stokes, the flight line director stationed at Naval Support Activity Naples, had canceled his vacation in July when fuel costs were, for him, prohibitive.

The overseas price still is higher than the average pump price U.S. motorists are paying in the States.

The U.S. retail price for gasoline fell to an average of $2.38 a gallon, dropping for the seventh week in a row, according to a Reuters news report this week. Pump prices in Italy without the benefit of coupons have been about 1.30 euros a liter, or nearly $6.50 a gallon.

October coupons are now on sale at Navy Exchanges and Italy-based Army and Air Force Exchange Service locations more than a week early, a rarity.

Current coupons expire Sept. 30 and won&#8217;t be accepted after Saturday. Customers can buy new coupons now to &#8220;avoid most of the craziness&#8221; of longer lines in the weeks to come, said Jason Williams, the operations manager at the exchange at Aviano Air Base.

AAFES, which sets gas prices for Germany, the United Kingdom, the Netherlands, Turkey and the Azores, expects to announce its October gas prices by the end of the week.

There are no on-base fuel stations in Italy; motorists fill up by redeeming coupons at any Esso or Agip stations on the economy.

Each month, the Naples office of tax-free products sets prices for fuel coupons by calculating changes in the barrel price of fuel, fluctuations in the currency exchange rate and gains or losses the Navy Exchange incurs the month before.

Italy grants U.S. and NATO personnel roughly $70 million a year in tax exemptions, of which roughly $65 million is for fuel, said Bart Di Muccio, administrator of the tax-free program in Naples. The rest are exemptions for tobacco and alcohol products.

Petty Officer 2nd Class Lisa Salinas, 23, has more romantic ideas in mind for the savings. The newlywed intends to put the extra dollars toward a plane ticket for her husband, Chris, a sailor stationed in Norfolk, Va.