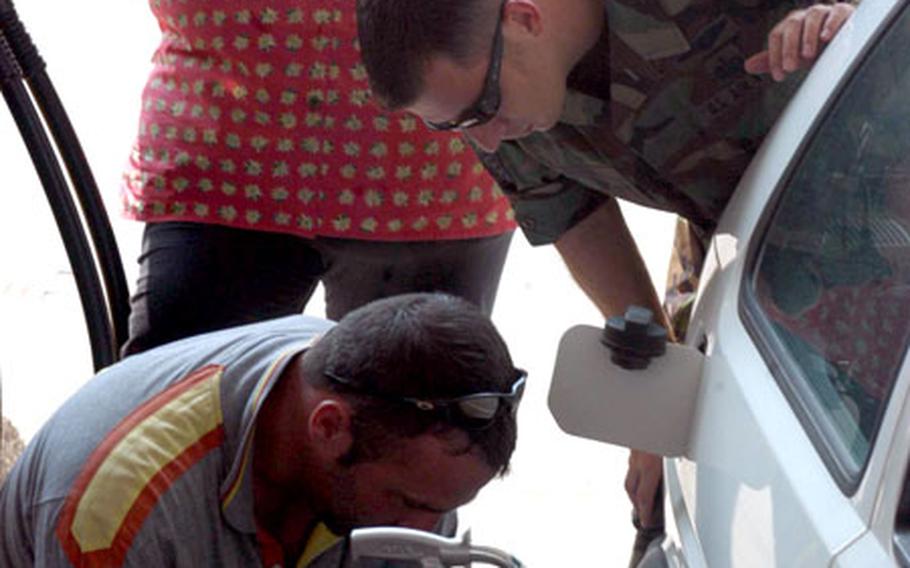 Tech. Sgt. Jason Farmer watches as Giancarlo Dall’Acqua puts some air in his tires Tuesday at the Agip station outside the gates of Aviano Air Base, Italy. Milvia Dall’Acqua waits to put gas into Farmer’s car. That gasoline will be a bit cheaper for Americans in Italy starting next month, even as pump prices rise for Italians. (Kent Harris / S&S)

The price of a barrel of oil reached an all-time high Monday. And gas prices in Italy recently climbed several euro cents a liter.

So naturally, prices that Americans pay for fuel coupons next month are going &#8230; down?

For the second straight month, coupons sold at Navy Exchange Service or Army and Air Force Exchange Service outlets will cost a bit less. Prices are set to drop from $66 for 100 liters of unleaded fuel to $63 on Friday.

Navy officials, who administer the program for American ID cardholders in Italy, couldn&#8217;t be reached for comment Tuesday. But Americans reached at the pump reacted in predictable fashion.

Farmer said he uses the coupons almost exclusively to buy gasoline. And with good reason: The price for Italians just rose to 1.267 euros at the station, which is operated by Giancarlo Dall&#8217;Acqua and his sister, Milvia.

So Americans will be paying half the listed price at the station &#8212; and that&#8217;s without taking the dollar-euro exchange rate into account.

Lia Scandola, an Italian national who works on base, filled up her tank Tuesday at the station as well. She was incredulous to find out that prices are dropping for the coupons.

He said the coupons probably account for 60 to 70 percent of his business.

And, despite what some people might think, higher prices actually mean less money for him. He said Italians appear to be driving less.

The price of a barrel of oil closed Monday above the $60 mark in on the New York Mercantile Exchange &#8212; the highest level since the commodity started trading there in 1983, according to a report in the Detroit News.

Airman 1st Class Ryan Hake said it probably wouldn&#8217;t make any difference for him &#8212; pointing at his Ducati Monster motorcycle.

Most Americans figure to save $9 in July, if they buy the full 300 liters they&#8217;re allotted. Some are only allowed 200 liters a month, though.

Allotments are based on engine size. Coupons are the only way to get discounted gasoline in Italy. There are no pumps for privately owned vehicles on base.