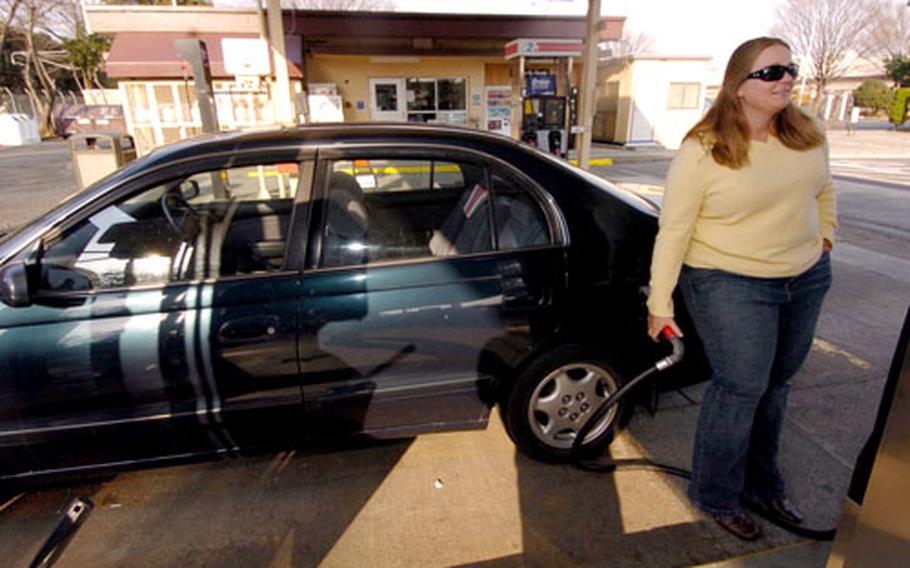 Sharron Todd pumps gas at the west-side station at Yokota Air Base, Japan, on Thursday. AAFES gasoline prices have dropped in the Pacific. (Christopher B. Stoltz / S&S)

CAMP FOSTER, Okinawa &#8212; Gas prices at Army and Air Force Exchange Service pumps fell more than a dime a gallon Thursday throughout the Pacific, with the exception of unleaded gas in Japan, which remained unchanged.

The price for a gallon of mid- grade gas at AAFES pumps in Okinawa and Japan remained steady at $2.232 for the first week of the agency&#8217;s new pricing policy.

The prices remained higher than the U.S. average calculated by the American Automobile Association. As reported by AAA, the average price of gasoline in the U.S. on Thursday was $2.151 a gallon.

But the AAFES prices were far below what gas costs outside base gates. The average price for unleaded regular gas in Japan this week was 132.2 yen, or about $4.16, per liter, according to a report released Wednesday by the Oil Information Center in Tokyo. On Okinawa, the average price per liter was 133 yen, or $4.18 per gallon.

Potter said AAFES&#8217;s retail pump prices will begin changing every Saturday starting Feb. 10 and will be based on the DOE weekly average published the previous Monday.

Consumers can expect a rise in gas prices in coming weeks, Potter said. After dropping to $52 a barrel, crude oil has begun increasing to the $56 level, he said.

&#8220;Pump prices for gasoline have started to level off after declining over the past few weeks,&#8221; he said.