Gas coupons in Italy are being upgraded 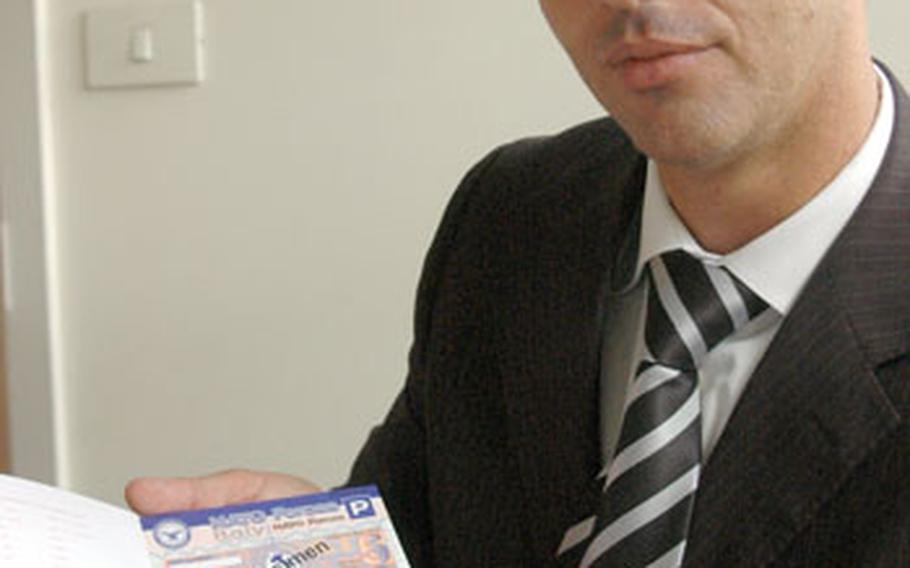 Bart Di Muccio, administrator of the tax-free office, which runs the gas-coupon program for U.S. and NATO commands in Italy, holds samples of the new coupons that will go on sale at U.S. and NATO bases in Italy starting Oct. 1. (Sandra Jontz / S&S)

Next month, the coupons that U.S. and NATO servicemembers in Italy use in exchange for petroleum products will have a whole new look as officials work to improve accountability and safeguard against fraud, misuse and counterfeiting.

&#8220;They are slightly bigger because, as of Oct. 1, the coupons will include seven more security features,&#8221; said Bart Di Muccio, administrator of the tax-free office at Naval Support Activity Naples, which runs the coupon program for U.S. and NATO commands in Italy.

The features will allow officials to track coupon use from issuance to when they are redeemed, he said.

The coupons go on sale Oct. 1. Some security features include a new traceable numbering system, bar code, and coloring that is copy-protected.

&#8220;We just purchased new equipment and software that can capture an image of a gas coupon,&#8221; providing officials with such information as when it was redeemed, who signed it, and at what gas station it was used, Di Muccio said.

With no gas pumps on military bases in Italy, U.S. and NATO military members, civilians and families fuel up at Agip or Esso stations on the economy. Through a four decades long agreement with Italian officials, NATO members are exempt from paying the fuel tax, roughly 35 to 40 percent of the pump cost, he said.

Drivers use pre-paid coupons at the pump instead of paying attendants with cash or credit cards.

The $30,000 officials invested in the coupon security upgrades will not be passed on to consumers, Di Muccio said.

Each month, the tax-free office sets prices for fuel coupons by calculating changes in the barrel price of fuel, fluctuations in the exchange rate between the U.S. dollar and the euro, and any gains or losses the Navy Exchange and the Army and Air Force Exchange Service incurred in the previous month&#8217;s sales.

The coupons consumers now use &#8212; those bought before Oct. 1 &#8212; won&#8217;t be redeemable after Sept. 30. People may return unused coupons for refunds from outlets where they were bought.

It&#8217;s not just the pay-at-the-pump coupons that are getting a makeover. The tax-free office issues 14 different coupon types, including official and private vehicle fuel coupons, coupons redeemed for motor oil, and those used for home heating petroleum.

No specific incident is behind the security upgrades, he said.

&#8220;We are always trying to better the system, find ways to improve security and a way to track the process,&#8221; Di Muccio said.