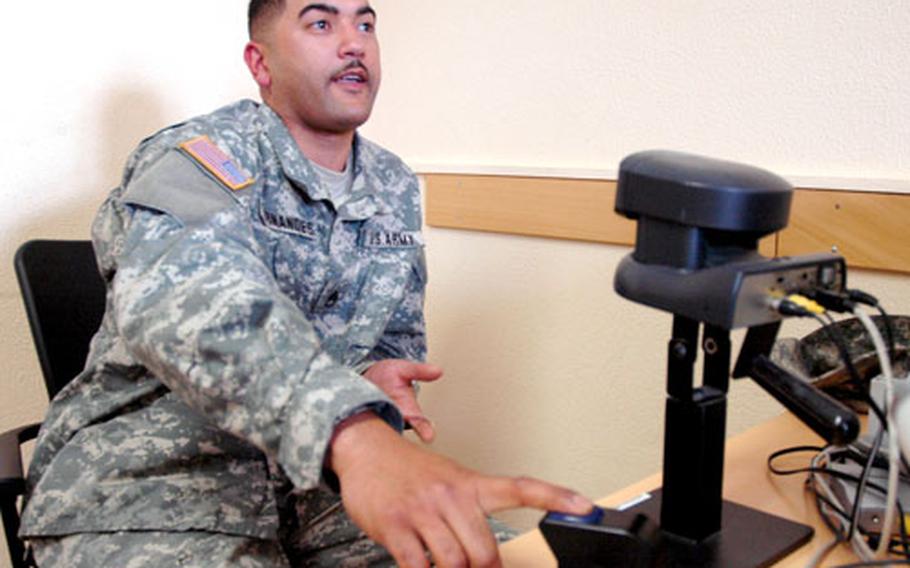 Staff Sgt. Amilcar Fernandes, of the 596th Maintenance Company in Darmstadt, Germany, has his fingerprint scanned to renew his identification card after getting a promotion. (Robin Hoecker / S&S)

DARMSTADT, Germany &#8212; Soldiers and civilians may want to hold on a little tighter to their military identification cards as more Army garrisons in Europe crack down on ID card-replacement policies to curb card losses and thefts.

Some 300,000 people are registered in the USAREUR Installation Access Control System, or IACS.

&#8220;I am concerned that some of our soldiers, civilians and family members are not aware of the significant security and force-protection implications of losing a DOD ID card,&#8221; Col. Willie E. Gaddis, commander of USAG Heidelberg, stated in a memo.

U.S. Army Garrison Heidelberg is the latest garrison to implement guidelines requiring ID card holders to report lost cards to their chain of command before receiving new ones. A memo sent in April by Gaddis encouraged all brigade and battalion commanders to enforce this policy.

Current USAREUR regulations require soldiers to report to the military police or provost marshal&#8217;s office to get a new card. Some garrisons, however, are adding their own restrictions to try reduce the number of missing IDs.

Master Sgt. John Knee at the USAG Heidelberg Directorate of Plans, Training, Mobilization and Security said he did not know of any force-protection problems that were the result of the lost ID cards, but each lost card puts the Army more at risk.

IDs disappear for a variety of reasons ranging from theft to losing them in clubs or in the dark abyss of the couch cushions. Reports from the USAG Benelux show that one soldier accidentally shredded his ID when destroying documents.

Each Army garrison sets its own policies for dealing with missing IDs. Knee, whose posts have included Fort Campbell, Ky., Fort Stewart, Ga., Fort Riley, Kan., and South Korea, said in some places, soldiers who lose their ID cards face &#8220;corrective training.&#8221; He said this could mean anything from having soldiers write essays to making them show their new ID to their commanders every day for a month.

At USAG Grafenw&#246;hr, for example, each time a person loses an ID, he or she must report to a higher level superior or civilian equivalent, according to the garrison&#8217;s Department of Emergency Services.

Making soldiers report to their superiors when they lose cards has proved effective in reducing the number of missing IDs.

USAG Benelux began implementing the policy in June 2005. Since then, the garrison has seen a 28 percent reduction in lost IDs, dropping from approximately 59 in the year before the policy began to about 43 after the new policy went into effect, said Joe Troxell, manager of its Central Processing Facility.

Officers and staff at Heidelberg are hoping for similar results. At least one ID cardholder agrees.