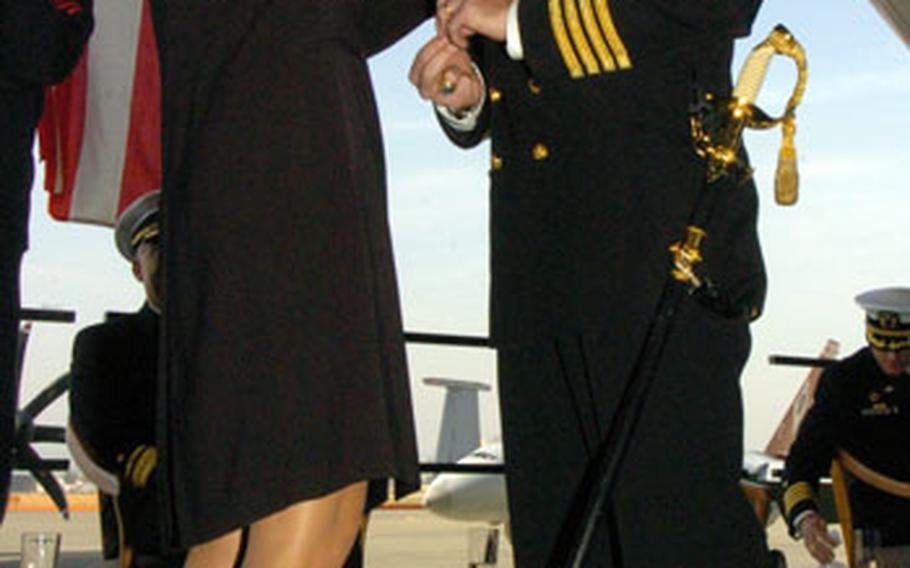 Amy Gardner fastens a pin on the uniform of her husband, Capt. Eric W. Gardner, during Thursday’s change of command ceremony aboard Naval Air Facility Atsugi, in which Gardner become the base’s new commanding officer. (Photo by Tim Wightman/S&S)

Cooper took considerable time thanking those who served with him during the past three years.

He got emotional when describing his feelings about being a pilot and about the base itself.

The outgoing and incoming commanding officers&#8217; families were mentioned frequently during the ceremony. Cooper recalled moments he spent on base with his children, Hannah and Grant. And guest speaker Rear Adm. James Kelly, commander of Naval Forces Japan, led the audience in a round of applause for Cooper&#8217;s wife, Lynn, for her service to the Atsugi community.

"Nobody has done this job better in Atsugi, in my lifetime here &#8230; than Lynn and Justin Cooper with some pretty superb help from Hannah and Grant," Kelly said.

Gardner told his wife and daughters at the end of his comments that he knew leaving Virginia Beach last month was difficult for them, but he had a "sneaking suspicion" that leaving Japan in three years will be just as difficult.

Then he assured Kelly of his family&#8217;s dedication to service.

"Admiral Kelly: the Gardner family is ready to go to work for you," he said.

Cooper&#8217;s next assignment is at the Joint Military Attache School at the Defense Intelligence Agency in Washington.